By James B. Jordan

Genesis 1 is written in terms of visual appearances, not in terms of scientific analysis. Genesis 1 speaks of “lights” in the sky, not of “sun and moon.” It says that these lights function as symbols and as clocks ( 1 :14). Ancient science was concerned with the proportions of earth, air, fire, and water in these heavenly bodies; modern science is interested in them as nuclear furnaces, sources of heat energy, and the like. Modern science is surely closer to the mark, and nothing in Genesis 1 contradicts its observations on this point, but this chapter in the Bible is concerned with a different aspect of these heavenly bodies. Similarly, while modern science separates lizards, insects, and rodents into three different groups, Genesis 1 lumps them together as “creeping things” (Genesis 1:24) — again the language of appearance.

The language of appearance accomplishes two things in Genesis 1. First, it gives a true description of the world as it is. It is not merely poetic to call the sun a “great light,” for the sun is a great light. Nor is it merely poetic to refer to “creeping things,” because the animals thus designated do, in fact, creep on the ground. Thus, provided we do not try to press the language of Genesis 1 into some scientific mold, ancient or modern, there is no reason not to take it literally.

At the same time, however, the language of visual appearance in Genesis 1 serves to establish a visual grid, a worldview. By writing in terms of visual appearance, the Bible sets up categories of visual imagery. Unfortunately, modern readers often have trouble with this. We who live in the post-Gutenberg information age are unfamiliar with visual imagery. We are word-oriented, not picture-oriented. The Bible, however, is a pre-Gutenberg in- formation source; while it does not contain drawings, it is full of important visual descriptions and imagery. This visual imagery is one of the primary ways the Bible presents its worldview. There is nothing to indicate that Genesis 1 is merely symbolic. At the same time, however, by using the language of visual appearances, Genesis 1 sets up a worldview grid that is used later on in Scripture for symbolic purposes. 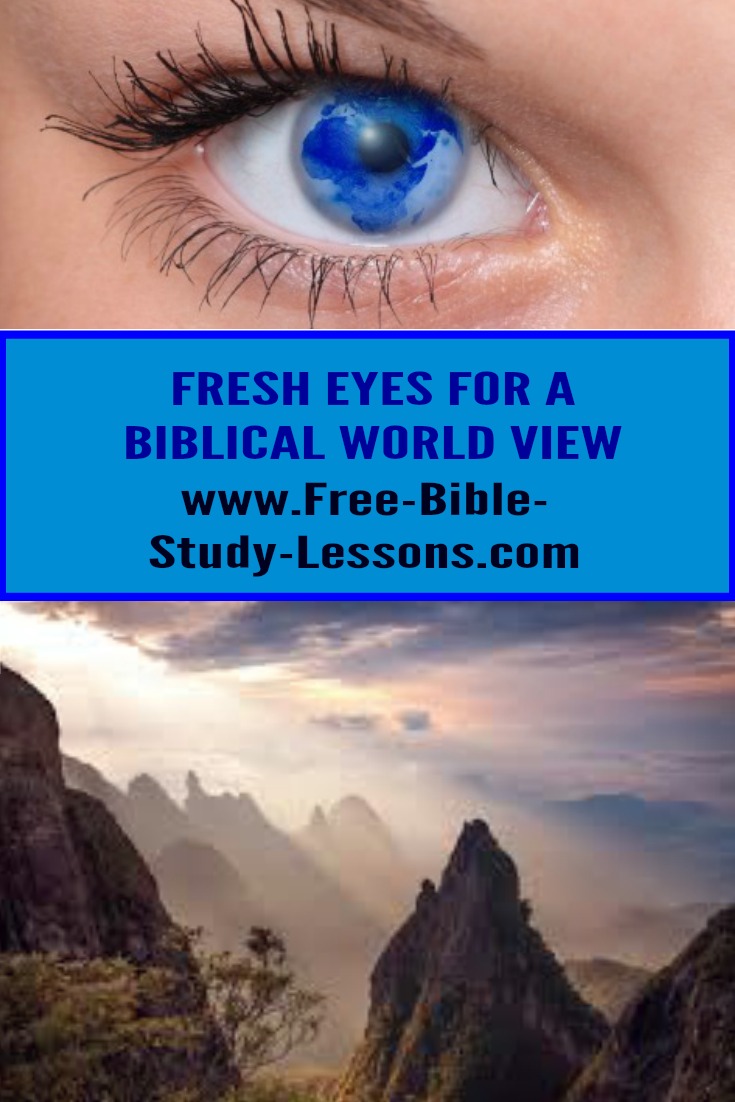 For instance, Genesis 1 sets up certain categories of animals. They are as follows: monsters, sea creatures, winged birds, cattle, beasts of the field, and creeping things. These six categories recur in Scripture. For instance, in Leviticus 11, where we find a discussion of clean and unclean animals, there are five categories: domestic animals (cattle), fish, birds, wild animals (beasts of the field), and creeping things. The distinction between clean and unclean is symbolic, and is set out in terms of Genesis one’s categories. The great monsters are also used symbolically in Scripture, often to represent the nations in revolt against God.

The best-known instances of this usage are the beasts of the books of Daniel and Revelation.

There is no reason to be surprised at the notion that the world and its creatures have a symbolic dimension. Romans 1:20 tells us that God’s invisible attributes are “clearly seen, being understood through what has been made.” In other words, the creation reflects the character of its Creator, and points us to Him. An example from common life will help to clarify this.

You get into your automobile, and turn on the radio. One station is playing music by the Rolling Stones. You twist the dial and come to another station playing music of Bach. You can tell the difference immediately. Why? Because Bach’s music reflects his person and style, and the music of Mick Jagger reflects his. If you have a trained ear, when you hear a piece by Bach you’ve never heard before, you might say, “I’m pretty sure that’s by Bach; it sounds like Bach.”

Just so, the universe and everything in it reveals the character of its Creator. God designed the universe to reveal Himself and to instruct us. The problem we have is that sin has made us deaf and blind. We need new eyes and ears, and the Scriptures can help us get them.

Modern literature is not written the same way as ancient literature, and this presents a problem for Bible students. George Mendenhall has written,

Ancient thought is associational, not “scientific,” and therefore tends to create the maximum of relationships between experience, language, and art, not the minimum which is so characteristic of modern over-specialization.

Before the modern era, and before Gutenberg, there were few books. The few men who wrote books wrote them very carefully. As a result, ancient writings, including the Bible, are very tightly and precisely written. Every word has its place…

Ancient and medieval literature abounds in numerical symbolism, large parallel structures, intricate chiastic devices, astral allusions, sweeping metaphors, topological parallels, and symbolism in general. Modern literature, whether fiction or non-fiction, is almost always written in a straight line. You don’t have to go back and forth in such books to unpack allusions or get ‘hidden” messages. In other words, you don’t have to study such books in a literary fashion. You just read them and get the message. Ancient and medieval literature, however, must be studied…

It is, of course, possible to jump enthusiastically into the Bible and find all kinds of symbols and allusions that sober study would discount. We moderns lack the kinds of instincts needed to be able to pick up on such things without effort. We have to read and study the Bible, immersing ourselves in its worldview, and then we will be able to discern valid symbols and allusions. Even so, it is doubtful if any twentieth-century expositor can do a perfect job of this; there will always be room for debate and discussion over particular passages. We can, though, set out some canons, or rules, for proper Biblical interpretation.

First of all, Biblical symbolism and imagery is not a code. The Bible does not use a symbol when a literal statement will do.

Biblical symbolism, like poetry, is evocative language, used when discursive, specific language is insufficient. The Bible uses evocative imagery to call up to our minds various associations which have been established by the Bible’s own literary art.

In other words, if John in Revelation 13 had wanted to say Nero, he would have said Nero. Instead, he said “beast”. By using the symbol “beast,” he was not just giving a code for Nero, he was bringing to mind a whole series of Biblical associations: the beast in the Garden, Adam clothed in skins of beasts, Nebuchadnezzar turned into a beast (Daniel 4), the beasts in Daniel’s visions, the human beasts who rioted against Paul at Ephesus (1 Corinthians 15:32; Acts 19), etc. By associating the beast with the number 666, he alluded to the dimensions of Nebuchadnezzar’s idol (Daniel 3:1), to Solomon’s fall into sin (1 Kings 10:14), and more.

Second, Biblical symbols do not exist in isolation. Symbols have meaning within a set of symbolic relations, or within a symbol system. This means that symbols have to be interpreted within the ‘symbolic design” in which they are located. Within such a symbolic design symbols function as part of a “network of relationships .“

In the Bible, the entire symbolic world is one organized and unified worldview, a worldview that actually takes its rise in the first chapters of Genesis. The symbolic meanings and associations of earth, sea, rocks, stars, plants, animals, serpents, trees, fruit, and all else are set out in these chapters. The rest of the Bible simply unpacks their meanings.

Third, in coming to understand Biblical symbolism, we may receive some clues from other ancient literature, but we must always have clear-cut Biblical indication for any symbol or image we think we have found. We don’t want to read the modern secular world-view into the Bible, but we don’t want to read the corrupt world-view of ancient Near-Eastern paganism into it either…

Fourth, the heritage of the Church in systematic theology and in the history of exegesis is always a check on wild speculation. According to Ephesians 4:8, the ascended Christ has given gifts to men, and these gifts are explained in verses 11-12:

The godly wisdom of these gifts, these men, is part of the treasure of the Church, and to ignore it is to despise the gifts of the Spirit.

Fifth, Biblical symbolism must be interpreted in terms of Biblical presuppositions and philosophy. In the early Church, the school of Alexandria became notorious for allegorical and symbolic exegesis; but their problem did not lie in the fact that they studied Biblical imagery. The problem was that they were trying to squeeze Biblical teachings into the categories of Platonic philosophy, and to do so they had to interpret the Bible allegorically. The Bible has its own presuppositions and its own philosophy of type and allegory; we do not need to borrow anything from Plato.

Finally, since so little work has been done in this area until recently, the student of Biblical imagery must be alert to the work of other scholars. Exegesis must never be done in a vacuum.

Excerpt for James B. Jordan’s book: Through New Eyes: Developing  Biblical View Of The World.