The Lord
Has Helped Us

Then Samuel took a stone and set it up between Mizpah and Shen. He named it Ebenezer, saying, “Thus far the Lord has helped us.”  1 Sam. 7:12

The days were dark.  Hard lessons had been learned.  The Israelites in their war with the Philistines had thought they could use the Ark of God as a lucky charm to win the battle.  They had been disappointed and the Ark had been captured.  The Philistines discovered that, although the Hebrew God was no lucky charm, neither was He a God to be mocked and placed in their unholy temples.  They ended up returning the Ark.

Twenty years later the Israelites decided they had had enough of their own ways and Philistine oppression and began to return to God.  Samuel was not playing games.  If they were serious about returning to God they had to abandon all their idols and heathen ways and follow Jehovah only.  No double-mindedness allowed!

When Israel assembled at Mizpah to show their genuine repentance, the Philistines heard about it.  They thought Israel had gotten together to attack them so they came armed for war.  The Israelites were scared.  Remember, the Philistines had the latest in military weapons, the Israelites, if they had any arms at all were light arms - probably farm tools.

Samuel interceded for the Israelites and they moved forward for battle. God supernaturally intervened and a great victory was won.  As a result Samuel set up a stone to remind the Israelites that "the Lord has helped us."  He called the stone Ebenezer: the stone of help. 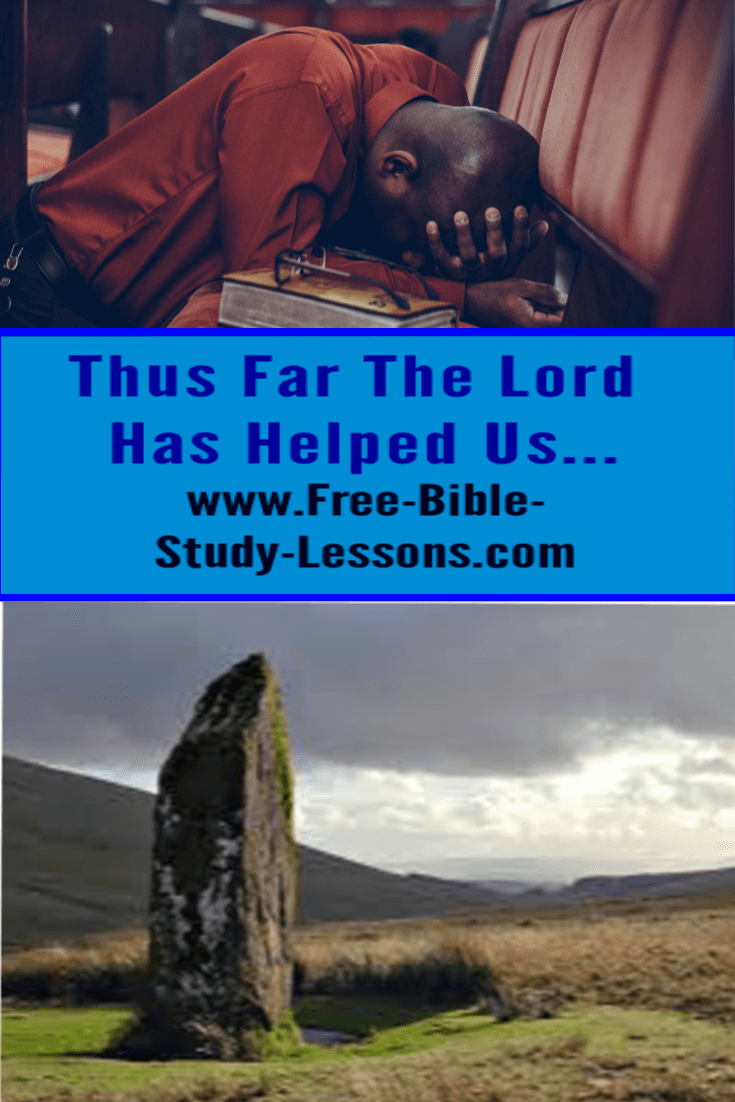 Sometimes we also face dark days.  Maybe they are forced upon us through no fault of our own or maybe, like the Israelites, they are a result of abandoning God and making bad choices.  Either way, there are steps we need to take.

1.  Examine our relationship with Jesus.  Is it where it should be?  Are we making choices that are displeasing to God?  If not, great!  But if we find areas that need work we need to repent and turn to God with our whole heart.  Jettison anything that would hinder you.

2.  Gather with like minded people.  Don't try to be a "lone wolf."  They are the first ones shot!  We need to come together in praise, worship and repentance.

3.  Then we need to move forward trusting that God will fight on our behalf.  That doesn't mean we are inactive, but we expect supernatural help.

4.  Then as God comes through for us, we need to set up an Ebenezer stone to remind us of what God has done.  It is so easy to forget and become careless.  It is so easy to panic when new trouble besets us.  We need to look back to the Ebenezer stone and say, "Thus far God has helped us."  As He was in the past, He will be in the present and in the future.  The past works of God give us confidence in the future works of God.