There Is Counterfeit Money
In Your Wallet!

If you are like the average person you have counterfeit money in your wallet or purse and you are not even aware of it! This article will explain the situation and give you some pointers on how to protect yourself from the cunning thieves who create counterfeit bills.

First of all, if we are to protect ourselves from counterfeit money, we must understand what honest money is. It may sound obvious, but many people confuse fake money with real money.

Note: If you purchase items from these links on this page, I will make a commission.  Disclosure Policy 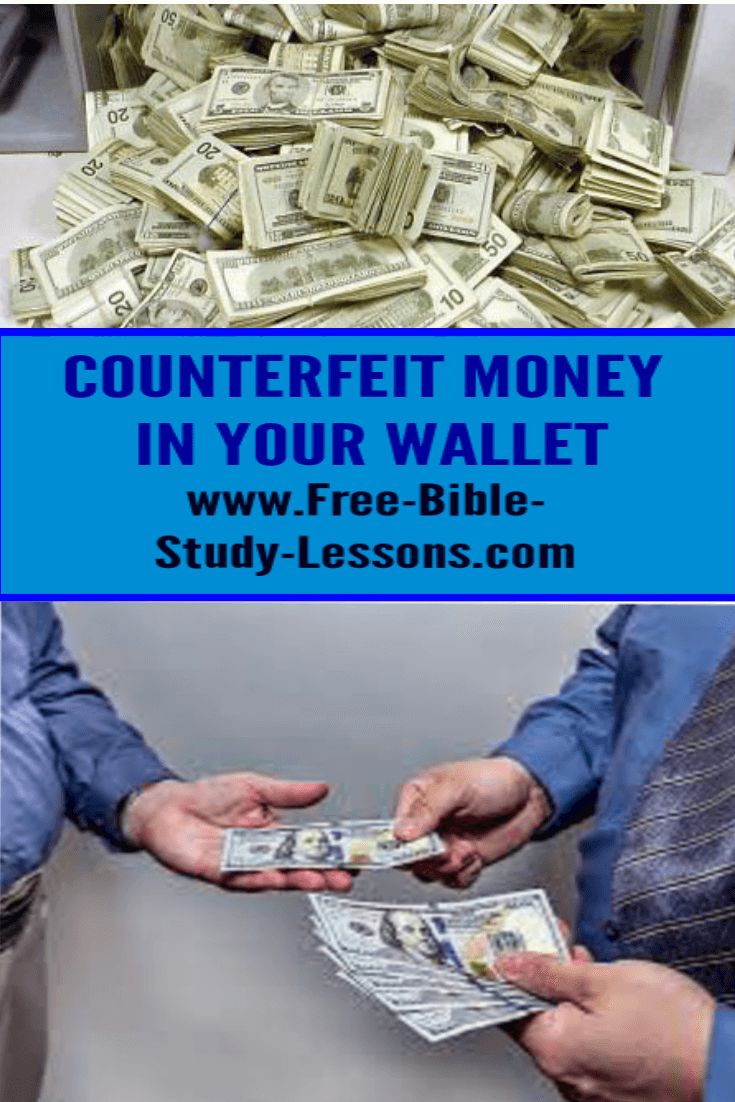 Money is something that people can easily trade for the goods or services they want or they can store it for future use. To be practical money must have these five characteristics:

1. It must be divisible. In some countries animals are used as money, but it is not practical because what if the price of something is half a live goat? It would have to be in terms of dead meat or whole goats. This greatly limits it.

2. It must be long-lasting. You don't want your money to be of something that is going to wear out or go rotten quickly. Your money would really disappear fast!

3. It must be transportable. You need to be able to carry it with you easily. You don't want to have to drag five sheep and three cows to the grocery store for your weekly shopping.

4. It must be recognized by others as money. If the person you want to purchase a service or product from doesn't want what you have, then it isn't money in that transaction.

5. It must be valuable. People must want to own it. If it has no value to them then it is worthless.

So what item[s] makes good money? In the past gold and silver have been popular forms of money. Gold especially has been highly valued. They both meet the five aspects of money. They are easy to divide, they last a long time [in fact the only thing to destroy gold is the acid Aqua Regia], they are easy to carry [and hide], they are recognized almost anywhere in the world, and they are valuable in and of themselves - they have inherent value.

The gold standard was common in the world until World War I and in some countries it lasted until the 1930's. When countries issued their own currency on the gold standard, that meant for every coin made or piece of paper money printed there had to be gold in storage somewhere. A person could trade their paper money for a specific amount of gold. If they could not trade for gold then it was counterfeit money - worthless.

In this case the paper money met all the requirements of honest money. It represented real money and it was better than carrying around a pocketful of gold or silver all the time.

What about the paper money we have today? It is backed by nothing. As long as we had the gold standard people [and governments] could not make more money than they had gold. Now the governments of the world create "money" at will - with no limits. This is what causes inflation, depressions, and financial woes. It is the way the government manipulates the money supply.

If you pull out your wallet and look inside, every bill you see there is counterfeit money. It is fake money. It has no value in itself. It is backed up by nothing but politician's promises... and we all know how good those are!

Governments are the greatest makers of counterfeit money of all time. The only possible reason they make laws against counterfeiting is because they don't like the competition!

If this is the case, why do people use paper money? They accept it and use it because they believe they can trade it for what they want in the future. They know that if someone gives them a $10 bill, they can go down to the store and buy $10's worth of goods.

The only thing that keeps paper money working is the confidence that people have in it. As soon as that confidence is gone, the money is worthless. It cannot be traded for anything! It is a very dangerous thing to have all your "wealth" tied to paper counterfeit money. It can literally disappear overnight.

For example, in 1915 the German Mark was about the same value as the US Dollar. A person could live reasonably well on the interest of 50,000 Marks in a bank savings account. Then hyper inflation set in. By 1923, those accounts were being closed for lack of sufficient funds. It cost the bank 2 million Marks for postage just to return the now worthless 50,000 Marks.

Don't think it couldn't happen in the US, Canada, or any other country. It can happen anywhere because we rely on counterfeit money - there is nothing backing up our "money".

"Government is the only agency that can take a valuable commodity like paper, slap some ink on it, and make it totally worthless". Ludwig Von Mises

What is the answer to this problem? On a national level, we must return to the gold standard [or any fixed precious metal standard]. This cannot be done all at once without creating financial disaster. It would be unfair to people in the current banking system. But it must be the goal. It could be accomplished by requiring there to be a small amount of gold to back up the paper money and then increasing the required amount every year until the currency was 100% backed by gold.

This is the only way to get away from worthless counterfeit money and return to a Biblical system of honest money. [Do a Bible study on "weights and measures" and see what God requires.] Is it likely to happen? No. Most governments, banks, and people do not want an honest money system. Counterfeit money is their system of choice. They would rather steal from others by inflating fake money than live under a Biblical system with a solid currency.

This trend cannot continue forever. There must come a day of reckoning. Sooner or later the counterfeit money system will collapse. Then, if people are wise, they will insist on a new currency 100% backed by gold or some precious metal.

Also, the government should not be in control of the money supply. It is just too tempting for the government to print counterfeit money when it likes to meet its 'needs'. Then we slip away from the gold standard and back into theft-induced inflation and depression.

Who should issue money then? Any organization or bank which maintains enough gold to buy back all its paper notes should be allowed to issue money. The job of the government is to enforce the rule that the money be 100% backed by gold [or whatever precious metal the money is stated to be backed by]. In other words, the government's job is to protect the people from fraud and counterfeit money [instead of being the major source of counterfeit money!].

What can you do personally to protect yourself from all this counterfeit money?

1. Don't be deceived. Modern national currencies are counterfeit money. One day they will collapse and be worthless. You cannot afford to live in a fantasy world. It will be shattered [perhaps not in your lifetime, but in that of your children or your children's children].

2. Get out of debt as soon as possible. Debt is being on the wrong side of compound interest. In inflation [and when the currency does collapse] you can be stripped of all your assets. Work at being debt-free. Learn not to live beyond your means. It will be vital in the future.

3. Have debt-free assets other than money. If you have valuable  possessions they will help protect you when money no longer buys what you need/want. However, keep in mind that in order for it to be valuable other people must be able to [and want to] buy it. For example, a stamp collection may be valuable, but how easy will it be to sell or trade it when you need to buy food or other things? Think of things which will be valuable when "money" is worth little or nothing.

4. In keeping with #3, it is good to own gold and silver. There are many different ways of buying it. With gold you must be careful, especially if you live in the United States. The American government has stolen gold from its own citizens four different times in its history. It was even illegal for Americans to own gold bullion from 1933 to 1975! [Land of the Free?] If they did it in the past, they may do it again in the future when times get tough.

5. Don't be dependent on a single job if possible. Turn a hobby or interest into a side business. You can have fun, earn extra income, a prepare for the future all at the same time.

While gold is good to have, the government may steal it. To my knowledge the Canadian government has never confiscated gold and no government has made silver illegal. Also gold collector's coins usually fall into a different category then gold bullion and escape confiscation.

So protect yourself. You may want to consider buying quality gold or silver coins through a reputable dealer. Even in the worst of times people recognize and want gold and silver. [They want real money not counterfeit money!] Hint: have a secure place to store it other than a bank. A bank may be closed when you need to get your money or the government may simply seize all your assets. Don't laugh - it has happened. Check out the history of your country and that includes the US.

"Fed [Federal Reserve] officials will inflate their way out of the crisis. On that day, you had better own gold, silver, and other similar non-paper assets. The dollar will die." Dr. Gary North.

"The only safe investments are those of tangible wealth and substance, such as precious metals. In fact, the worse the economic outlook, the brighter the future for metals! Gold and silver coins are real money, and they are not adversely impacted by the strange anomalies that affect paper currency or paper investments, such as inflation, depression, or even income tax!" Peter Kershaw

If times are good for you right now, take time to prepare. Don't panic or over-react, but be aware. The collapse of counterfeit money must happen if the currency isn't backed up, but we don't know when - this year or 300 years from now... Still prepare and teach your children to prepare and believe in and work for an honest money system.

For a free book which explains a Biblical money system in easy to understand terms download the PDF book "Honest Money - Biblical Principles Of Money And Banking" from freebooks.com.