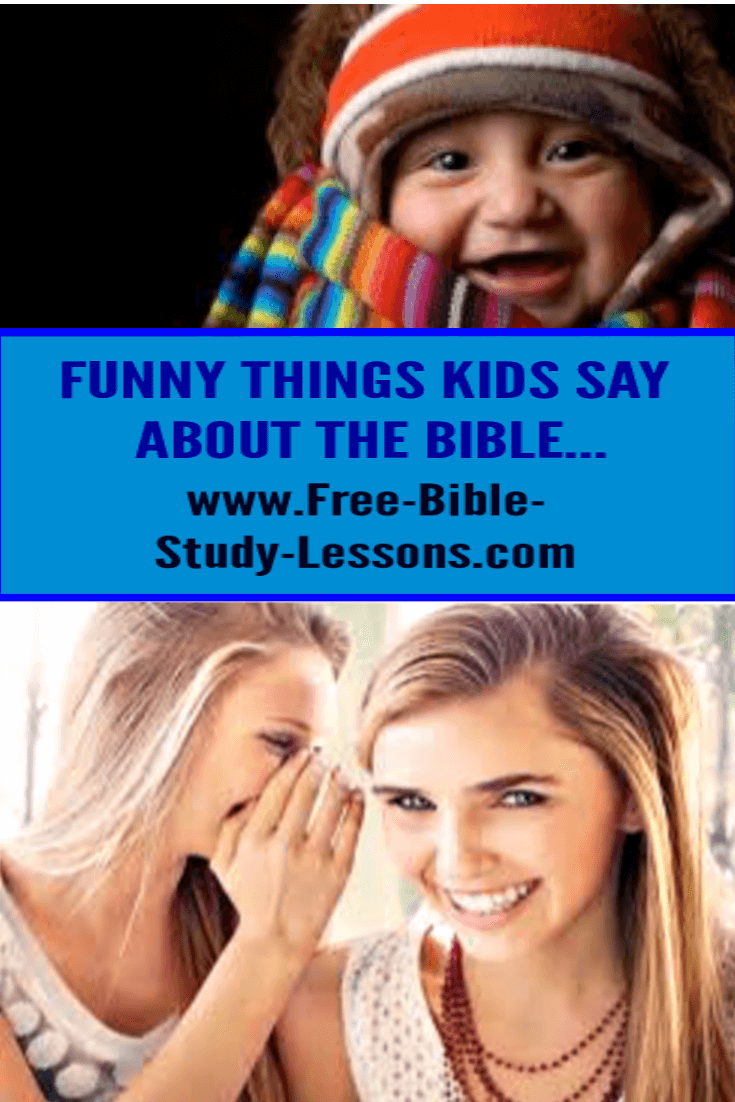 The Bible According to Kids

The following statements about the Bible were written by children and have not been retouched or corrected (i.e., bad spelling has been left in.)

- In the first book of the Bible, Guinesses, God got tired of creating the world, so he took the Sabbath off.

- Adam and Eve were created from an apple tree.

- Noah's wife was called Joan of Ark because Noah built the ark, which the animals came to in pears.

- Lot's wife was a pillar of salt by day, but a ball of fire by night.

- The Jews were a proud people and throughout history they had trouble with unsympathetic Genitals.

- Samson was a strong man who let himself be led astray by a Jezebel like Delilah.

- Samson slew the Philistines with the axe of the Apostles.

- Moses led the Hebrews to the Red Sea, where they made unleavened bread, which is bread without any ingredients.

- The Egyptians were all drowned in the dessert.

- Afterwards, Moses went up to Mount Cyanide to find the ten commendments.

- The first commandment was when Eve told Adam to eat the apple.

- The seventh commandment is "Thou shalt not admit adultery".

- Moses died before he ever reached Canada.

- Then Joshua led the Hebrews in the battle of Geritol.

- The greatest miracle in the Bible is when Joshua told his son to stand still and he obeyed him.

- David was a Hebrew king skilled at playing the liar. He fought with the Finkelsteins, a race of people who lived in Biblical times.

- When Mary heard that she was the mother of Jesus, she sang the Magna Carta.

- Then the three Wise Guys from the east arrived and found Jesus in the manager.

- Jesus was born because Mary had an Immaculate Contraption.

- St. John, the blacksmith, dumped water on his head.

- Jesus enunciated the Golden Rule, which says do one to others before they do one to you.

- He also explained that "Man does not live by sweat alone".

- It was a miricle when Jesus rose from the dead and managed to get the tombstone off the entrance.

- The people who followed Jesus were called the 12 decibles.

- The epistles were the wives of the apostles.

- One of the opossums was St. Matthew who was also a taximan.

- St. Paul cavorted to Christianity. He preached the holy acrimony, which is another name for marriage.

- A Christian should have only one spouse. This is called monotony.

It was Palm Sunday, and the family's 6-year old son had to stay home from church because of strep throat. When the rest of the family returned home carrying palm branches, the little boy asked what they were for.

His mother explained, "People held them over Jesus' head as he walked by."

"Wouldn't you know it," the boy fumed. "The one Sunday I don't go to church, and Jesus shows up!"

A grandmother overheard her 5-year-old granddaughter playing "wedding." The wedding vows went like this:

3-year-old Reese :"Our Father, Who does art in heaven, Harold is His name. Amen.

A little boy was overheard praying: "Lord, if you can't make me a better boy, don't worry about it. I'm having a real good time like I am.

After the christening of his baby brother in church, Jason sobbed all the way home in the back seat of the car. His father asked him three times what was wrong. Finally, the boy replied, "That preacher said he wanted us brought up in a Christian home, and I wanted to stay with you guys."

One particular four-year-old prayed, "And forgive us our trash baskets as we forgive those who put trash in our baskets."

A Sunday school teacher asked her children as they were on the way to church service, "And why is it necessary to be quiet in church?" One bright little girl replied, "Because people are sleeping."

A mother was preparing pancakes for her sons, Kevin 5, and Ryan 3. The boys began to argue over who would get the first pancake. Their mother saw the opportunity for a moral lesson. "If Jesus were sitting here, He would say, 'Let my brother have the first pancake, I can wait.'" Kevin turned to his younger brother and said,"Ryan, you be Jesus!"

A father was at the beach with his children when the four-year-old son ran up to him, grabbed his hand, and led him to the shore where a seagull lay dead in the sand.
"Daddy, what happened to him?" the son asked.
"He died and went to Heaven," the Dad replied.
The boy thought a moment and then said, "Did God throw him back down?"

A wife invited some people to dinner. At the table, she turned to their six-year-old daughter and said, "Would you like to say the blessing?"
"I wouldn't know what to say," the girl replied.
"Just say what you hear Mommy say," the wife answered.
The daughter bowed her head and said, "Lord, why on earth did I invite all these people to dinner?"

Daughter: "Why is everyone getting down on their knees in church?"
Mother: "Shhh, they are going to say their prayers."
Dauther: "With all their clothes on?"