Do You Want
To Get Well?

Jesus was always surprising His disciples by the things He did and said. Some of them seemed a little crazy...

When Jesus saw him lying there and learned that he had been in this condition for a long time, he asked him, “Do you want to get well?”  John 5:6

In the context of this question, Jesus and His disciples had walked up to the Pool of Bethesda.  This place was where sick people came because they wanted to be healed.  According to their beliefs [the text is unclear whether it actually happened or was simply a belief] at random times an angel would stir the water of the pool and whoever was the first one into the water after that happened would be healed. 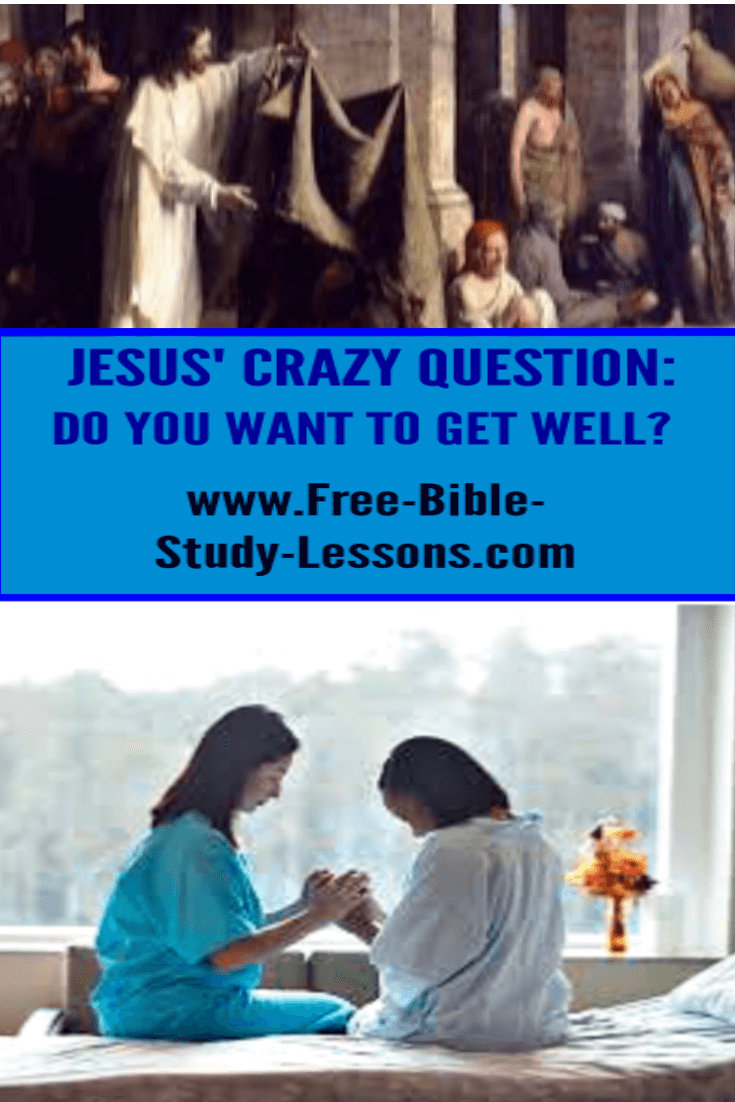 The area was full of sick people gazing intently at the water waiting anxiously for the stirring and hoping to be the first in…and this while the Great Healer was standing right beside them.  [Side Point:  Sometimes we are so fixed on how we think something should be done that we miss what God is really wanting to do.  Let’s keep open minds and eyes!]

Jesus could have healed everyone in that place.  But He didn’t.  The Father had sent Him to help one man get well.  A man who had been an invalid for 38 years.  Every day he asked his friends to bring him to the pool.  Here was a man who was hoping in what he knew was hopeless.  Yes, he believed if he could get into the water first he would be healed, but he knew, because of his condition, someone would always beat him to it.  Yet day after day he hoped…he dreamed…

To this man…dreaming the impossible dream…wanting to be restored to health…Jesus comes.  And what does Jesus ask?  “Do you want to get well?”  Is that a crazy question or what?  The answer should be obvious.  What a dumb question to ask a sick man struggling to get a healing…

Yet we know Jesus did not waste words.  There was a reason behind the question.  The truth is that many people who say that want healing or victory or a touch from God really don’t.  Although they go through the motions and talk the talk, they have become comfortable with their sickness, their anger, their bitterness or whatever is holding on to them.  They have had it or held onto it so long it has become a part of their identity.  It is who they think they are.  They have embraced their enemy and are afraid to let him go.  Who would they be without the sickness or the anger or the bitterness to give them attention or meaning or satisfaction?  It would be a new world, a new experience, a growth.  For some, losing what they know is not what they want.  So while they act and talk as if they want deliverance, their heart is not in it.  They will always find excuses for the way they are…

While there are many reasons for sickness, in the case of this particular man his sickness was caused by some kind of sin [John 5:14].  In asking if he wanted to be healed, Jesus was also asking if he was willing to leave the sin behind.  The Bible is clear.  If we receive deliverance but are unwilling to walk in that deliverance and return to our old ways we can find ourselves in worse shape than we originally were.  It is not genuinely helping to deliver someone who is only going to use it to get into worst trouble!

What is it that you need to be healed or delivered from?  Physical sickness?  Emotional sickness [bitterness, resentment, anger, etc.]?  Spiritual sickness [coldness to Jesus]?  Financial sickness?  Or…?  Jesus is looking at you and asking, “Do you want to be made well?”  Are you willing to do what it takes and abandon old thought patterns and actions to be delivered?  Are you willing to launch out into something totally new…to follow hard after Christ…and not return to the past?  Do you really want to be made well?  Think about it and all its implications before you answer…