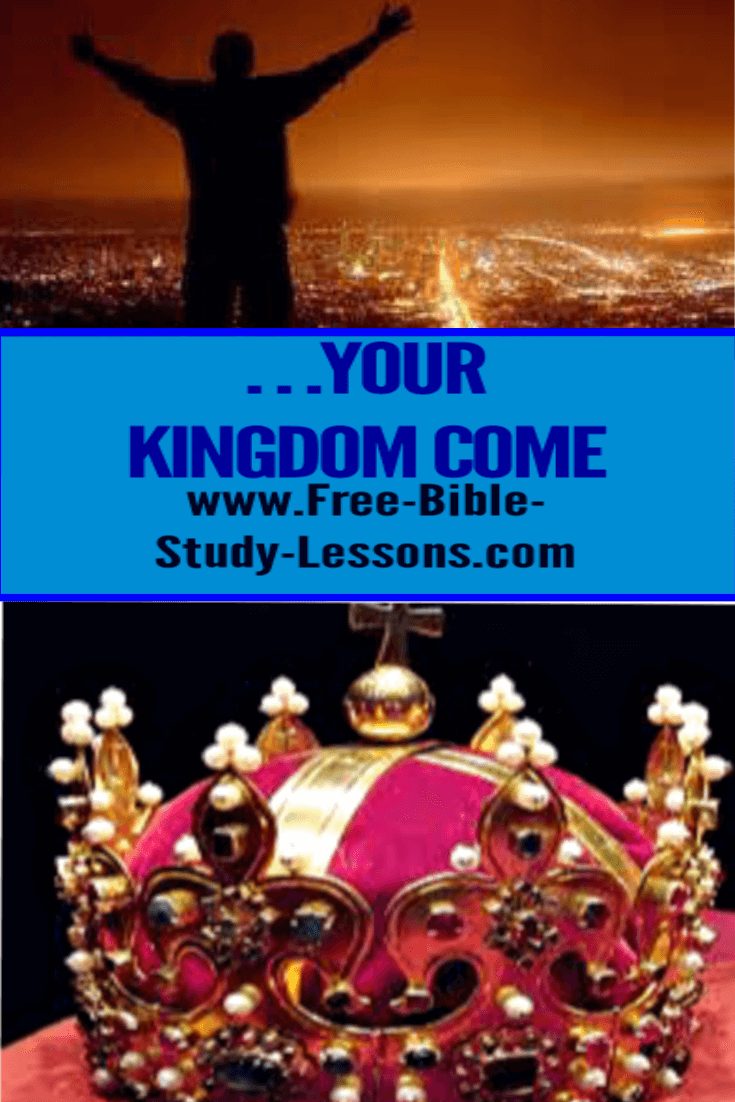 In our modern world we don’t often think in terms of kingdoms because there are very few real kings around anymore.  We do; however, think in terms of nations.  A kingdom is basically the area ruled by a king, a place where his word is law and his will is done.  When we think of the Kingdom of God we can think of the Nation of God as long as we realize that, unlike in many of our nations, God is not an elected Ruler.  He is the Absolute and Almighty Leader Whose rule is never in question and which will never come to an end.

Jesus told Pilate that “My kingdom is not of this world…My kingdom is from another place” [John 18:36].  By this Jesus meant His kingdom is a spiritual kingdom.  Some Christians have used this as an excuse to abandon the world because they see the Kingdom of God as exclusively spiritual.  This is a serious misunderstanding.  The Kingdom of God originates in the spiritual realm and has its source there, but it is to impact everything - spiritual and physical - which is under Christ’s authority…and that is every created thing!

Let me illustrate it this way.  Suppose a man, who is a drunk and wife-beater, is saved.  His salvation - like everyone else’s salvation - is based on faith in the finished work of Christ on the cross through the grace given him by God.  It is spiritual.  There is nothing physical he can do it earn it.  However, if there has been a true spiritual work of God in his life, there is going to be a change in his physical life.  He is going to give up drinking and begin treating his wife with love and respect.  That which originates and has its source in the spiritual, has an impact on the physical world.

With this in mind, there are two aspects of praying for the Kingdom of God to come.

1.  When Jesus originally prayed this prayer, the kingdom was near but not yet here.  Some Christians believe that it still has not come.  This is in direct contradiction to the words of Jesus in Mark 9:1:

“That there be some of them that stand here, which shall not taste of death, till they have seen the kingdom of God come with power.”

Jesus plainly told His disciples that, at least some of them, would see the kingdom come with power.  So either Jesus lied or the Kingdom of God has come.

So when did this kingdom come?  The Kingdom of God crushed its enemies at the Cross, celebrated its victory at the Resurrection, crowned its King at the Accession and empowered its subjects at Pentecost.  King Jesus NOW has ALL power and authority [Matt. 28:18].

So, since the Kingdom of God has come after the Lord’s Prayer was given, is there any reason to pray “Your Kingdom Come?”  YES!

2.  While the Kingdom of God is established and firm, the full effects of it are not yet seen in this world.  The Kingdom is here, but it is a kingdom at war for not everyone and not everything is in submission to the King.  As we look around us we still see rebellion and sin, death and destruction in every aspect of this physical world.

When we pray “Your Kingdom come” we are praying for the total revelation of the kingdom of King Jesus in this physical world.  We are asking for changed lives - individuals to move from rebellion to submission.  We are asking for changed laws - that injustice would move to Godly justice.  We are asking for the fullness of the Kingdom of God to be seen and in control of every aspect of creation.  We realize that this will be full accomplished at the Return of our King; however, as ambassadors, warriors and lovers, it is our job to proclaim and enforce His rights to the best of our abilities, being empowered by the Holy Spirit, right now.

Christians who are sitting around waiting for the return of Christ or squandering time and resources endlessly looking for the “signs of His coming” are going to be disappointed.  Christians who have a limited view of salvation and the victory of the Cross are also going to be disappointed.  Christ’s victory and kingdom cover everything in heaven and earth [i.e. all created things].  When we pray “Your Kingdom come” we are asking for nothing less than the revelation and implementation of Christ’s total rulership in every aspect of life.  While we can certainly pray for His kingdom to come in specific situations and people we are dealing with, our vision must never limit His kingdom.  It is ALL His!