New Life Out Of Death

Now Mary stood outside the tomb crying. As she wept, she bent over to look into the tomb and saw two angels in white, seated where Jesus’ body had been, one at the head and the other at the foot…He asked her, “Woman, why are you crying? Who is it you are looking for?”

Thinking he was the gardener, she said, “Sir, if you have carried him away, tell me where you have put him, and I will get him.”

Mary Magdalene was a devoted disciple.  Ever since Jesus had delivered her from bondage to seven demons [Luke 8:2], she had followed Him.  She had invested her life and finances in His ministry.  She believed in Him.  She knew He was the Messiah Who would deliver people from their sins.  She felt the love of God through Him.  All her hopes and dreams for a brighter future were centered on her work for Jesus. 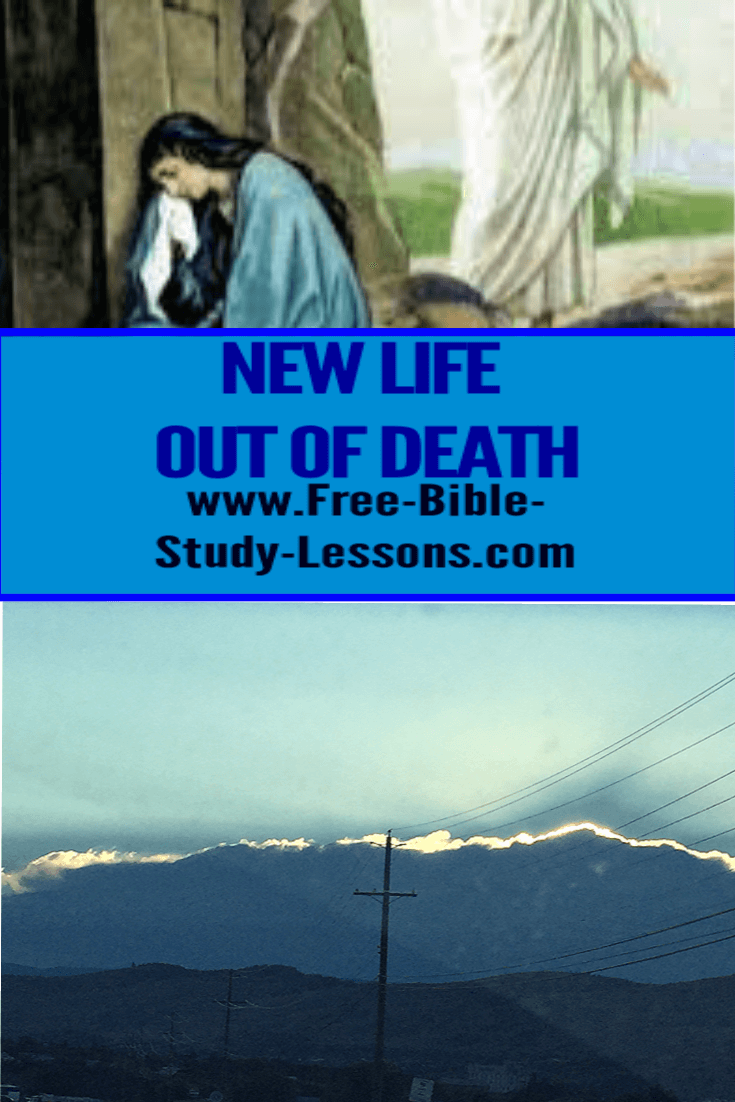 Now Jesus was dead.  His lifeless body lay in tomb.  And even then they hadn’t left Him alone, someone had tried to erase all the evidence that He had even existed by moving His body.  Her dreams were dashed.  Her faith was crushed.  Her life, so intertwined with Jesus, was destroyed along with His.  The joy was gone, only weeping was left.  Life seemed to be over, she might as well have been buried with Him.

Have you ever felt like Mary?  Can you identify with her?  Have you invested your life in the things of God only to see everything blow up?  Have you had your faith shaken to the core so that you are not even sure what you believe any more?  Have your dreams and goals dried up and blown away?  Have you been left empty and weeping?  Has despair gripped your very soul?

Mary had witnessed the crucifixion of Jesus.  That was an undeniable fact.  She had seen Him put into the grave.  That was an undeniable fact.  Now she was weeping ignorant that she, too, had walked through the valley of the shadow of death and was now already on the other side.  There was a Greater Fact that she did not know.  She didn’t know that there was no reason for crying any more.  She was unaware that even as she was already crying, Jesus had already risen from dead!  Then He called her name…

Notice where Mary was.  She was at the tomb.  She was facing her pain.  The disciples were hiding in fear.  Her love for Jesus had overcome her fear and so she was as close as she could be to Him even through she believed Him to be dead.  And so she was the first to discover that the night was over, the day had dawned.  Jesus was Alive!  Jesus didn’t forget the disciples, they, too, would learn of the resurrection, but their discovery was delayed.

When the darkness seems to overwhelm you, when all seems lost, press as close to Jesus as you can.  Although emotions are raging, take them to Jesus.  Do it even if you don’t think He is listening!  Weep, if you must, but never forget that the two greatest ways of pressing close to Jesus are praise and thanksgiving.  Keep at it.  Don’t despair.  Don’t give up.  That answer may already have been given.  And listen…listen…Jesus is calling your name…