Poems about courage can inspire our own bravery. It is easy to become discouraged in life, but the courage of others can be inspirational and motivational for us. It helps to know others face the same emotions and temptations. Enjoy these poems of courage.

Who never walks save where he sees
Men's tracks, makes no discoveries.
J.G. Holland

Courage, Brother! do not stumble,
Though thy path be dark as night;
There's a star to guide the humble,
Trust in God and do the right.
Norman MacLeod

Poems Of Courage:
WHEN GATHERING CLOUDS
AROUND I VIEW 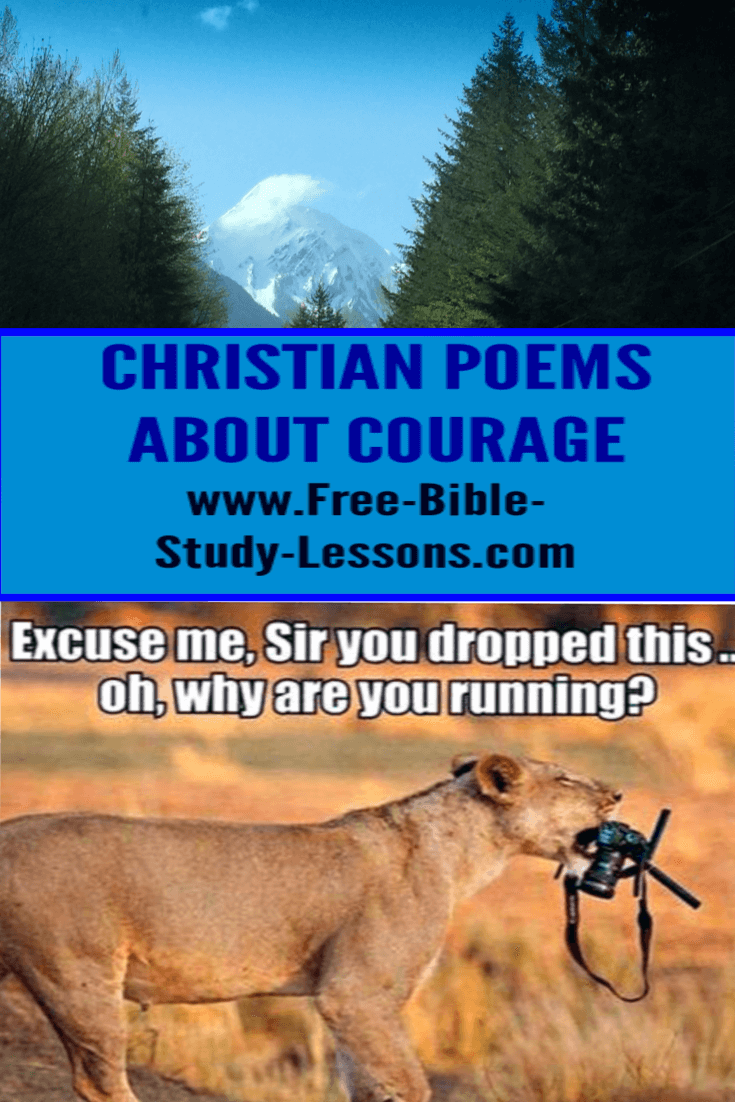 When gathering clouds around I view,
And days are dark, and friends are few,
On Him I lean, who, not in vain,
Experienced every human pain;
He sees my wants, allays my fears.
And counts and treasures up my tears.
If aught should tempt my soul to stray
From heavenly wisdom's narrow way,
To fly the good I would pursue,
Or do the sin I would not do,--
Still He who felt temptation's power
Shall guard me in that dangerous hour.

If wounded love my bosom swell,
Deceived by those I prized too well,
He shall His pitying aid bestow
Who felt on earth severer woe,
At once betrayed, denied, or fled,
By those who shared His daily bread.

If vexing thoughts within me rise,
And sore dismayed my spirit dies,
Still He who once vouchsafed to bear
The sickening anguish of despair
Shall sweetly soothe, shall gently dry,
The throbbing heart, the streaming eye.

When sorrowing o'er some stone I bend,
Which covers what was once a friend,
And from his voice, his hand, his smile,
Divides me for a little while;
Thou, Saviour, mark'st the tears I shed,
For Thou didst weep o'er Lazarus dead.

And oh, when I have safely past
Through every conflict but the last,
Still, still unchanging, watch beside
My painful bed, for Thou hast died;
Then point to realms of cloudless day,
And wipe the latest tear away.

Poems About Courage:
WHAT I LIVE FOR

I live for those who love me,
Whose hearts are kind and true,
For heaven that smiles above me,
And waits my spirit, too;
For all the ties that bind me,
For all the tasks assigned me.
And bright hopes left behind me,
And good that I can do.

I live to learn their story
Who've suffered for my sake,
To emulate their glory,
And follow in their wake;
Bards, patriots, martyrs, sages,
The noble of all ages,
Whose deeds crown history's pages,
And Time's great volume make.

I live to hold communion
With all that is divine,
To feel there is a union
'Twixt Nature's heart and mine;
To profit by affliction,
Reap truths from fields of fiction,
And, wiser from conviction,
Fulfil each grand design.

I live to hail that season,
By gifted minds foretold,
When men shall rule by reason,
And not alone by gold;
When man to man united,
And every wrong thing righted,
The whole world shall be lighted
As Eden was of old.

I live for those who love me,
Whose hearts are kind and true,
For heaven that smiles above me,
And waits my spirit too;
For the cause that lacks assistance,
For the wrong that needs resistance,
For the future in the distance,
And the good that I can do.

Poems About Courage:
RELIGION AND DOCTRINE

He stood before the Sanhedrim;
The scowling rabbis gazed at him;
He recked not of their praise or blame;
There was no fear, there was no shame
For one upon whose dazzled eyes
The whole world poured its vast surprise.
The open heaven was far too near,
His first day's light too sweet and clear,
To let him waste his new-gained ken
On the hate-clouded face of men.

But still they questioned, Who art thou?
What hast thou been? What art thou now?
Thou art not he who yesterday
Sat here and begged beside the way,
For he was blind.
And I am he;
For I was blind, but now I see.

He told the story o'er and o'er;
It was his full heart's only lore;
A prophet on the Sabbath day
Had touched his sightless eyes with clay,
And made him see, who had been blind.
Their words passed by him like the wind
Which raves and howls, but cannot shock
The hundred-fathom-rooted rock.

Their threats and fury all went wide;
They could not touch his Hebrew pride;
Their sneers at Jesus and his band,
Nameless and homeless in the land,
Their boasts of Moses and his Lord,
All could not change him by one word.

I know not that this man may be,
Sinner or saint; but as for me,
One thing I know, that I am he
Who once was blind, and now I see.

They were all doctors of renown,
The great men of a famous town,
With deep brows, wrinkled, broad, and wise,
Beneath their wide phylacteries;
The wisdom of the East was theirs,
And honor crowned their silver hairs;
The man they jeered and laughed to scorn
Was unlearned, poor, and humbly born;
But he knew better far than they
What came to him that Sabbath day;
And what the Christ had done for him,
He knew, and not the Sanhedrim.

Poems About Courage:
THE RIGHT MUST WIN

O, it is hard to work for God,
To rise and take his part
Upon this battle-field of earth,
And not sometimes lose heart!

He hides himself so wondrously,
As though there were no God;
He is least seen when all the powers
Of ill are most abroad.

Or he deserts us at the hour
The fight is all but lost;
And seems to leave us to ourselves
Just when we need him most.

Ill masters good, good seems to change
To ill with greater ease;
And, worst of all, the good with good
Is at cross-purposes.

Ah! God is other than we think;
His ways are far above,
Far beyond reason's height, and reached
Only by childlike love.

Workman of God! O, lose not heart,
But learn what God is like;
And in the darkest battle-field
Thou shalt know where to strike.

Thrice blest is he to whom is given
The instinct that can tell
That God is on the field when he
Is most invisible.

Blest, is he who can divine
Where the real right doth lie,
And dares to take the side that seems
Wrong to man's blindfold eye.

For right is right, since God is God;
And right the day must win;
To doubt would be disloyalty,
To falter would be sin!

Poems About Courage:
THE LABORER

Stand up--erect! Thou hast the form
And likeness of thy God!--Who more?
A soul as dauntless 'mid the storm
Of daily life, a heart as warm
And pure, as breast e'er wore.

What then?--Thou art as true a man
As moves the human mass among;
As much a part of the great plan
That with creation's dawn began,
As any of the throng.

Who is thine enemy? The high
In station, or in wealth the chief?
The great, who coldly pass thee by,
With proud step and averted eye?
Nay! nurse not such belief.

If true unto thyself thou wast,
What were the proud one's scorn to thee?
A feather which thou mightest cast
Aside, as idly as the blast
The light leaf from the tree.

No: uncurbed passions, low desires,
Absence of noble self-respect.
Death, in the breast's consuming fires,
To that high nature which aspires
Forever, till thus checked;--

These are thine enemies--thy worst:
They chain thee to thy lowly lot;
Thy labor and thy life accursed.
O, stand erect, and from them burst,
And longer suffer not.

Thou art thyself thine enemy:
The great!--what better they than thou?
As theirs is not thy will as free?
Has God with equal favors thee
Neglected to endow?

True, wealth thou hast not--'tis but dust;
Nor place--uncertain as the wind;
But that thou hast, which, with thy crust
And water, may despise the lust
Of both--a noble mind.

With this, and passions under ban,
True faith, and holy trust in God,
Thou art the peer of any man.
Look up then; that thy little span
Of life may be well trod.

Poems About Courage:
THE MARTYRS' HYMN

Flung to the heedless winds,
Or on the waters cast,
The martyrs' ashes, watched,
Shall gathered be at last;
And from that scattered dust,
Around us and abroad,
Shall spring a plenteous seed
Of witnesses for God.

The Father hath received
Their latest living breath;
And vain is Satan's boast
Of victory in their death;
Still, still, though dead, they speak,
And, trumpet-tongued, proclaim
To many a wakening land
The one availing name.

From the German of MARTIN LUTHER