There was a time when Psalm 149 was greatly used by Christians in peril and in warfare.  Granted that at times heretics like Thomas Munzer made use of it for evil, the fact remains that all who used it had at this point a more realistic awareness of Scripture’s meaning than do Christians now.  Psalm 149 and like texts of Scripture were used by orthodox and heretic alike because at this point both believed in Scripture’s often repeated affirmation that God calls His people to victory in time and in eternity.

This is a Psalm of praise: it gives us aspects of the required and God-ordained praise of God.

There are two ways in which we are called and required to praise God.  The psalm begins and ends with a summons and a command:  “Praise ye the LORD.”

The first form of required praise is the praise of exuberant worship, of joy and beauty [vv. 1-4].  The call is to sing “a new song,” i.e., a song of thanksgiving for deliverance.  The worship of God requires praise and thanksgiving [v. 1].

The people of God [Israel] must rejoice in their Maker; they must be joyful in Him who is their King.  The fact of God’s kingship follows from His creation of heaven and earth.  As Maker of all things, God is the absolute law-giver, Lord and King over all.

The praise of God is one of exuberance, of joyful thanksgiving.  They are to praise God [v. 3] with mind and body, with music and the dance [cf. Ex. 15:20; Judges 11:34; II Sam. 6:14; Jer. 31:4].  The life of the believer is to be a joyful one in every respect.  He is to be of a “sober” mind [I Thess. 5:6], i.e., to be steady, calm, avoiding either indifference or excitability.  But a sober person can also be joyful and exuberant.  Excitability, or emotional instability, and joyful exuberance are two different things.

The reason for this joy is in the fact that the Lord “taketh pleasure in his people.”  They are the “meek,” here meaning “bowed down” will oppression, with suffering because of their stand for the faith.  But the Lord “will beautify the meek with salvation” [v. 4].  God’s purpose, as Isaiah stated it, is “To appoint unto them that mourn in Zion, to give unto them beauty for ashes, the oil of joy for mourning, the garment of praise for the spirit of heaviness; that they might be called trees of righteousness, the planting of the Lord, that he might be glorified” [Is. 61:3]. 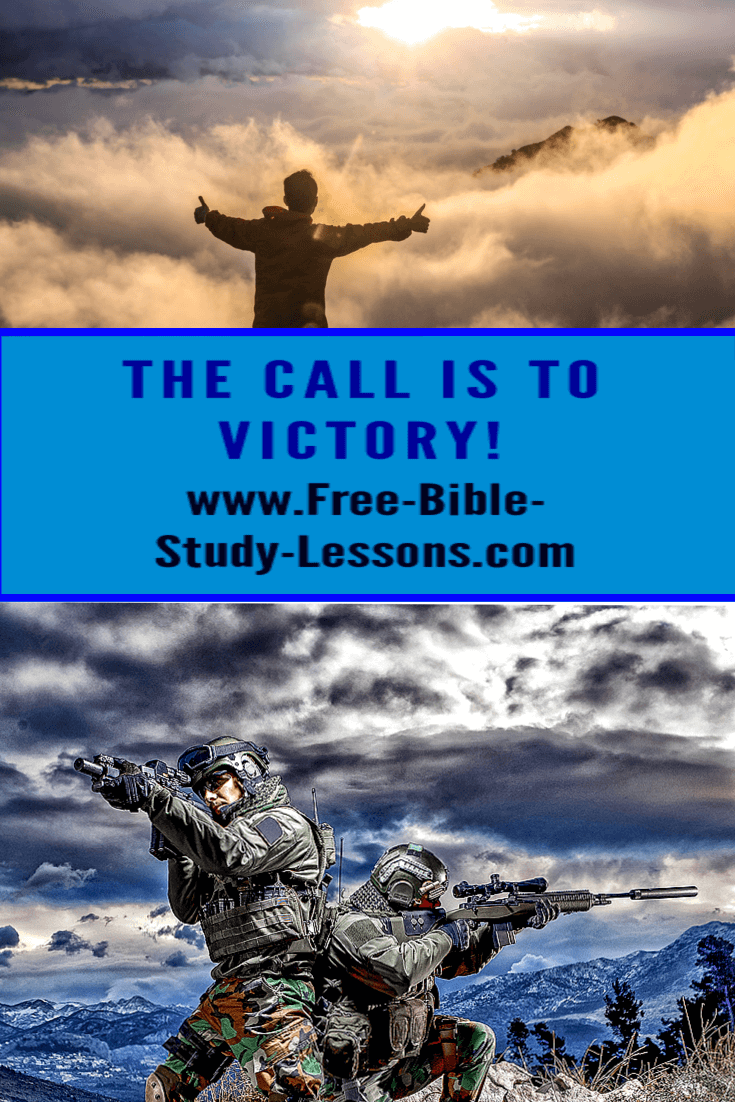 The second form of required praise is by means of battle unto victory [vv. 5-9].

The introduction of this is verse 5, which calls upon the saints to “by joyful in glory: let them sing aloud upon their beds.”  What verses 6-9 have in mind is actual battle and physical destruction of the enemies of God.  These verses cannot be “spiritualized” away.  They speak of the literal destruction of God’s enemies as a means of praising God, a God-ordained means and a God-ordained victory.  It is this triumph which cases them to sing along on their beds, unable to sleep for very joy.  It is God’s calling for His people.

This calling to victory involves first, the praise of God from the heart and mouth.  Second, it requires warfare, total warfare, against the enemies of God, against evil.  The people of God must be ready to war, “a two-edged sword in their hand” [v. 6].  Third, God calls His people to exercise power in every area, in church and state, and to serve God by bringing justice to bear against evil-doers, “To execute vengeance upon the heathen, and punishments upon the people” [v. 7].  Fourth, the nature of this vengeance is specified.  Not all evil can be eliminated from the world.  But godly law and order can “bind” down evil and impose “fetters of iron” and restraint upon all who violate the law.  Fifth, “To execute upon them the judgment written” is not only the duty of the saints, but it is their “honour” or glory to do so.  As Alexander wrote, “To act as God’s instruments in this great judicial process, so far from being a disgrace or hardship, is an honour reserved for all the objects of his mercy and subjects of his grace.”

The misinterpretation of this psalm involves reading it as entirely a document of the past, of Israel’s history, and of no relevance to us.  Granted that the psalm may have had reference, and probably did, to a specific historical incident, yet it is a perversion of history to limit a text to the past which is given without any such limitation.  Was God for victory where Israel was concerned, and for defeat where Christian men and nations are concerned?  Leupold reads this psalm in terms of the past, and defends it in those therms.  But such a defence is a sorry one, and regrettable in an able commentator.  Was God’s action moral then and immoral now?

The neglect of the psalm, and many similar passages, is because of the prevalent heresy of defeatism, a Manichaean belief that Satan will triumph in the material world, and only the second coming will over-rule this defeat.

This psalm speaks unconditionally, and it speaks of victory.  Those who refuse to believe that history shall see the triumph of God’s people, their vengeance on the enemies of God, and their rule in justice and truth, are denying to God the praise which is His due.

One final point: the commentators who, treating this psalm as exclusively applicable to Israel’s history, then and then only defend its morality, reveal their own immorality.  To refer a justification of victory to long-past history only is appalling.  Their God is dead: He functioned only in Israel’s ancient past.  Such men are guilty of blasphemy and deserve the vengeance of God, whether they be believers or not.  The Lord is a God of battles, and of victory.  There is no other God.  The Scriptures know only one true God, and He does not change.

Excerpt from Thy Kingdom Come by R.J. Rushdoony.