How To Receive
A Miracle

Would you like to know how to receive a miracle?  Is there something that you need Jesus to do for you?

Here we have an amazing story that illustrates how one man can receive a miracle:

Then they came to Jericho. As Jesus and his disciples, together with a large crowd, were leaving the city, a blind man, Bartimaeus (which means “son of Timaeus”), was sitting by the roadside begging.  When he heard that it was Jesus of Nazareth, he began to shout, “Jesus, Son of David, have mercy on me!”

Many rebuked him and told him to be quiet, but he shouted all the more, “Son of David, have mercy on me!”

Jesus stopped and said, “Call him.”

So they called to the blind man, “Cheer up! On your feet! He’s calling you.”

Throwing his cloak aside, he jumped to his feet and came to Jesus.

“What do you want me to do for you?” Jesus asked him.

“Go,” said Jesus, “your faith has healed you.” Immediately he received his sight and followed Jesus along the road. Mark 10:46-52, NIV

I love Bartimaeus.  He was blind in the natural but he had great supernatural vision.  We are going to look at how he received a miracle.

He was a man who used what he had.  Sure, he was blind and, at that time in history, that limited him to a life of begging.  But he was not sitting in self-pity.  He was not wasting his time in regret and fantasy.  He had an impossible dream.  One that only God could fulfill.

What did he have?  It didn’t seem like much.  He could have been moaning that he didn’t have anything.  That everyone else had so much more.  Are you looking for a miracle?  What do you have?  Don’t be overwhelmed by what you don’t have.  Look.  What do you have and how can you use it? 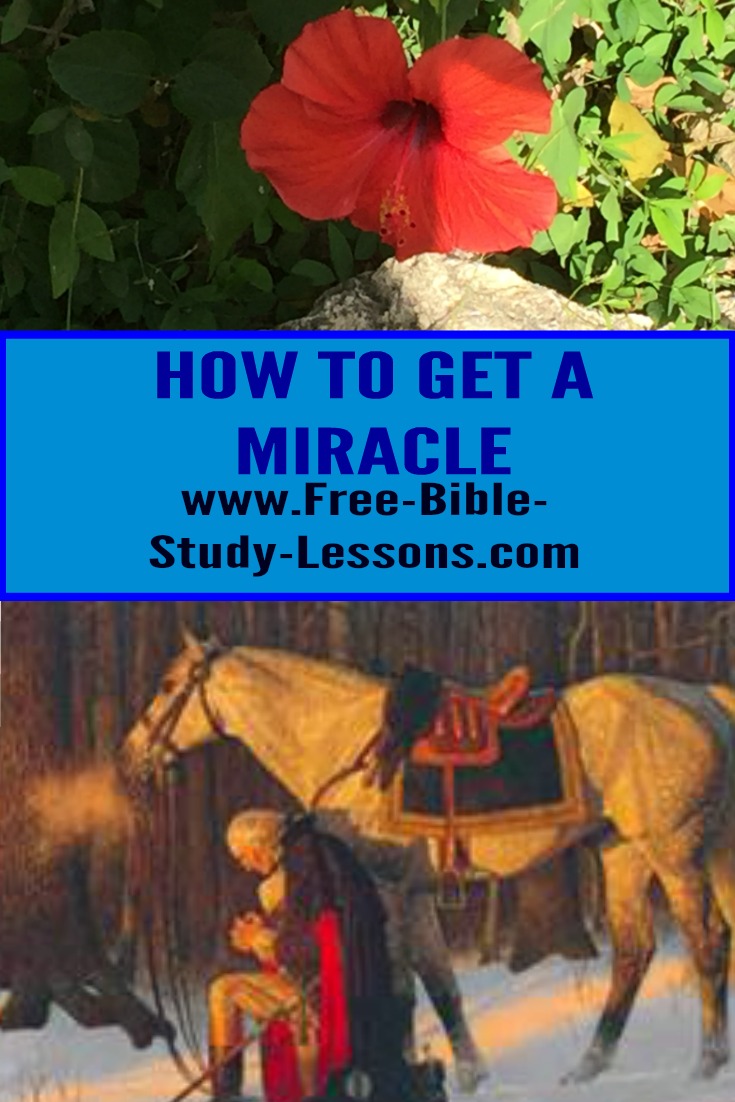 Blind Bartimaeus didn’t have sight, but he did have hearing.  He listened.  Somewhere he heard people talking about this Miracle Worker Who was wandering around.  He had given sight, He had opened deaf ears, He had even raised the dead.  There seem to be no limit to His power.  He could be the Messiah.

Because Bartimaeus used his ears to listen and didn’t close his mind in a dark room of despair and self-pity, he gained knowledge.  There was a Man Who was healing people.  True, He had never been to Jericho and Bartimaeus had no way of searching Him out.  Still the impossible had suddenly entered the boundaries of the possible.

Because he listened and gained knowledge, his faith grew.  Anyone Who could do the kinds of things he heard Jesus was doing must be the Messiah, must be the true Son of David.  Still there he was and Jesus was not.

One day, as he was sitting there begging and pondering, he heard the sound of a great crowd coming.  Any other beggar might have been excited about the possibility of getting extra money.  Maybe they would not be going to bed hungry that night.  They could have been calling so much for attention that they missed what the crowd was all about.  It is easy to get so focused on ourselves and our concerns that we miss the big picture.  We might miss receiving a miracle because we are so busy talking instead of listening.  That beggar might have gone home that night happy with a few extra coins never knowing what he had missed.

But not Bartimaeus.  He listened.  He was curious.  What were they saying?  What was this all about?  Then he caught the words that were to change his life forever.  He heard it was Jesus Who was coming.  How his heart must have jumped.  This was his chance.  Although he didn’t know it, as far as we know, Jesus only went to Jericho once.  If he missed this, it was all over.

Now we see that Bartimaeus had something else.  He had a mouth!  He began shouting out, “Jesus, Son of David, have mercy on me!”  He didn’t know if Jesus was at the front, in the middle, or at the back of crowd.  He just knew that he was not going to miss Him.  If he wasn’t healed it wasn’t going to be because Jesus was unaware of him!

Do you want to receive a miracle?  How desperate are you?  Are you calling out to Jesus?  Or is it just on your wish list.  Have you accepted your condition or circumstance?

It would be nice if that was all there was to it.  Bartimaeus encountered opposition!  He was making a scene and the people didn’t like it.  They weren’t blind.  They had no real compassion.  To them Bartimaeus was an embarrassment.  They told him to shut up.  Jesus was an important Man, this was no time to trouble the Master.  Important people had things to do and he was just an annoying distraction.  He had better be quiet and let Jesus and others be about their business.

If Bartimaeus had had a poor self-image, he may have let the overwhelming opposition of the nameless, faceless crowd - the voices rebuking him from the darkness - stop him.  He could have sat back down and said, “They’re right.  I’m not important.  Jesus won’t do anything for me.”

But Bartimaeus was not going to let public opinion stand in the way of his miracle!  He shouted out all the louder for Jesus.  He was desperate and determined to be heard above the crowd.  And Jesus heard him…just as He hears you.

Jesus stopped and called for him.  Public opinion is a fickle thing.  The very people who had been irritated with Bartimaeus and tried to silence him are the ones who start to encourage him and tell him Jesus is asking for him.  Basing your life or decisions on what other people think is a sure way of destruction.  Base your life on the unchanging Word of God - whether it makes you popular or unpopular.

In a step of faith, Bartimaeus threw aside his begger’s coat.  He knew he was not going to need it any more.  His life of begging in the darkness was over.  And when Jesus asked him what he wanted, he didn’t have to pause to think about.  It was crystal clear in his mind.

I suspect that many times we do not get what we want from Jesus because it is simply an unclear, hazy wish or dream.  It would be nice if…  When you are praying about a situation or something you or someone else needs.  Write down specifics.  Let Jesus know the details.  Don’t hesitate.  If it doesn’t come to pass exactly as you wrote it down, don’t sweat it.  At least Jesus knew what you wanted.

Blind Bartimaeus listened and learned.  He let faith grow in his heart.  At the right time he spoke out and would not be silenced by opposition.  And when he heard the voice of Jesus calling him - not before - he took the step of faith and received his sight.

Looking to receive a miracle?  Let this historical story be an encouragement to you.