The king, moreover, must not acquire great numbers of horses for himself or make the people return to Egypt to get more of them, for the Lord has told you, “You are not to go back that way again.”  He must not take many wives, or his heart will be led astray. He must not accumulate large amounts of silver and gold.  When he takes the throne of his kingdom, he is to write for himself on a scroll a copy of this law, taken from that of the Levitical priests.  Deut. 17:16-18, NIV

Solomon is known as the wisest man who ever lived.  In our society, we tend to think of this wisdom as understanding scientifically how things work, or writing wise sayings, or knowing how to master relationships, etc.  If you look at Solomon’s prayer, the wisdom he was primarily concerned with - and which he later demonstrated - was wisdom in governing the people of God, of making fair judicial judgments.

As a king dedicated to God and making Godly judgments we can assume that he followed the instructions to write out the law of God, which was certainly the book of Deuteronomy and maybe the entire first five books of Moses.  To govern wisely, he had to be familiar with God’s laws and requirements. 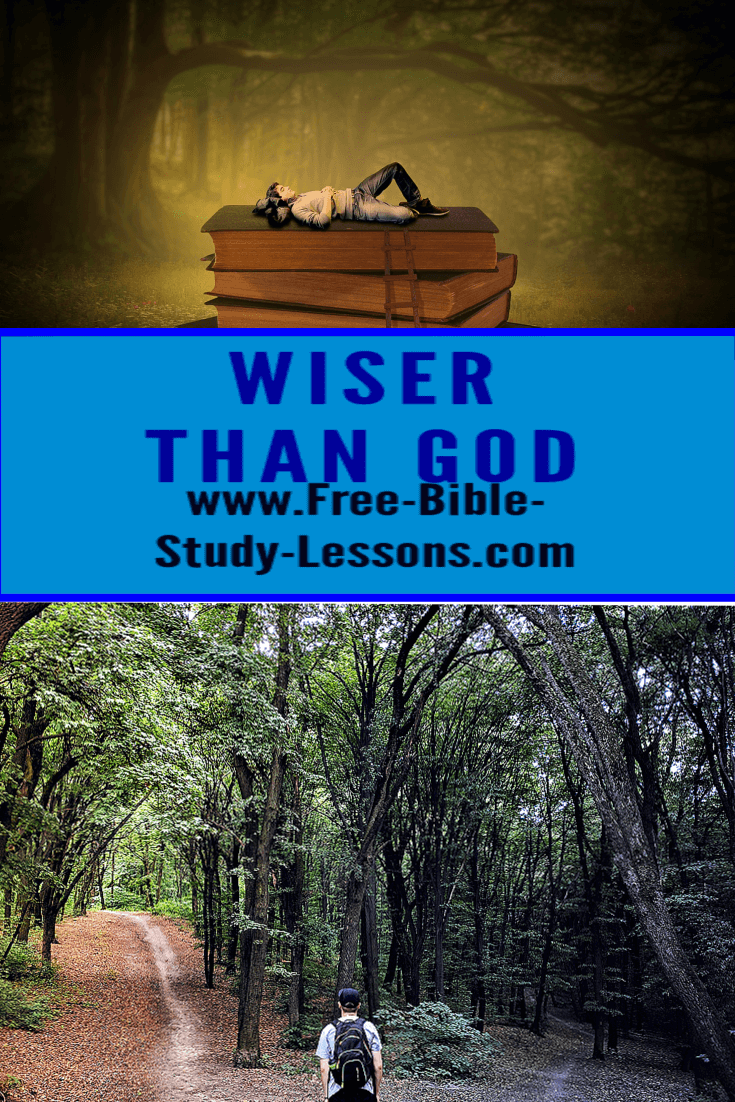 On a side note, the New Testament says we, as Christians, are kings and priests.  As kings in Christ, perhaps we should consider writing out by hand the book of Deuteronomy as part of our kingly duties.  I don’t think I have ever heard anybody recommend it.   And I don’t know of anyone, including myself, who has actually done it yet, but it might be worth thinking about.

In any case, somewhere along the line Solomon starting thinking that he was wiser than God.  He properly did not think about it quite as bluntly as that.  It may have been more subconscious.  God had told the kings not to multiply horses - which meant not to develop an offensive military, not to multiply wives and not to develop personal wealth.  If you know the story of Solomon, you know that he violated all three of these commands.  He thought he was wiser than God.  For some reason, the rules of God didn’t apply to him.  I am sure he had his justifications.

“King Solomon, however, loved many foreign women besides Pharaoh’s daughter…Nevertheless, Solomon held fast to them in love.  He had seven hundred wives of royal birth and three hundred concubines, and his wives led him astray.  As Solomon grew old, his wives turned his heart after other gods, and his heart was not fully devoted to the Lord his God, as the heart of David his father had been.  He followed Ashtoreth the goddess of the Sidonians, and Molek the detestable god of the Ammonites.  So Solomon did evil in the eyes of the Lord; he did not follow the Lord completely, as David his father had done.  1 Kings 11:1-6, NIV

In our highly sexualized culture, we think of the Solomon’s motivation for 700 wives and 300 concubines as strictly sexual.  While that would have been a part of it, the major motivation was political.  When a king made an alliance with another nation, often he would marry the other king’s daughter.  The daughter would then become an ambassador representing the needs of her husband to her father.  This relationship replaced to a large extent the need for a civil service.  Solomon’s many wives and concubines showed his extensive treaties with other nations, which was itself a violation of God’s command to keep separate.

Solomon thought he was wiser than God.  He thought he could handle his wives.  He thought nothing would ever turn him from following God, but his wives did.  They were committed to their native religions.  To please them, Solomon allowed and participated in the worship of other gods.  While there is no evidence, that I know of, that Solomon allowed child sacrifice during his reign, he opened the door so that later generations of Israelites would engage in perverse sexuality and child sacrifice in the worship of these same gods.

Why is true Christianity now a minority belief in the once great Western Christian nations?  True, a large but shrinking number of people still claim to be Christians, but a very small minority of them actually have a consistent Biblical world-view.  What happened?  As nations, we thought we were wiser than God.  We trusted in our own power, we made compromises, we searched after wealth, we thought we could make laws that were better than God’s laws, we refused to deal with evil but allowed it to exist and grow.  And now we are heathen nations, devoted to heathen gods with sexual perversity and the common child sacrifices of abortion and public education.

Do Christians Think They Are
Wiser Than God?

What about us?  Do we think we are wiser than God?  Of course, we would never say it that way.  But if we don’t think the Word of God, from Genesis to Revelation, applies to us, then we are in trouble.  If we think the laws and instructions of God don’t apply to us, then we are headed for destruction.  Sure, they may to apply to others, but in my situation there is an exception, you understand.  We can justify to ourselves any violation of the Law of God.

This is not to have a hard-hearted, legalistic attitude.  We love people where they are, as God loves them.  We don’t condemn or justify ourselves for our failures, but we love God, trust Him, yield to Him and seek to love and follow Him with all our heart, mind, soul and bodies.  We do not try to be wiser than God, but we loving submit to Him in all things.

So here is the question to think about as we consider our lives:  Do you and I think we are wiser than God?