In a land of far away where fantasy trumps reality lived an emperor who ruled over his realm with great wisdom.  He was a tolerant man full of love and acceptance for everyone.  If someone in his realm committed a theft or a rape or a murder, he made sure they received a fair trial and a light sentence.  After all, it could hardly be considered their fault, they were only reacting against a society which had abused them.  If women wanted to kill their own children he made sure no one criticized them and tried to make them feel guilty as if they had done a terrible thing.  Love and tolerance were the hallmarks of his reign.

One day, as he was sitting on his throne with his courtiers prancing around him, he was struck by a revelation.  Just a people were able to choose where they lived and worked and with whom they developed relationships so they should be allowed to choose their gender.  After all, why should one be locked into such narrow-minded thinking as to have to keep the gender with which they were born.  In fact, there should be no distinction and even terms like “he” and “she” were intolerantly offensive and should be replaced by a term full of acceptance like “ze.”

In the midst of this grand revelation, the emperor realized with startling clarity that he was actually a “she” trapped in a “he” body.  The emperor then insisted on being called the empress.  Ze called for the best dress designers and had the finest dresses made.  Ze called for the greatest makeup artists and hair stylists.  Ze enjoyed zeself with new clothes, jewelry, lipstick, eyeshadow and more.  It was great fun and Ze was delighted that ze ruled such a tolerant and loving realm.  Everywhere the empress went the people loudly proclaimed ze’s great beauty in form and wisdom in leadership.  Ze’s face was on the cover of not only fashion magazines but also prestigious scientific and nature journals praising ze’s great strides in breaking down prejudices and bringing the realm into a new era of enlightenment and open-mindedness. 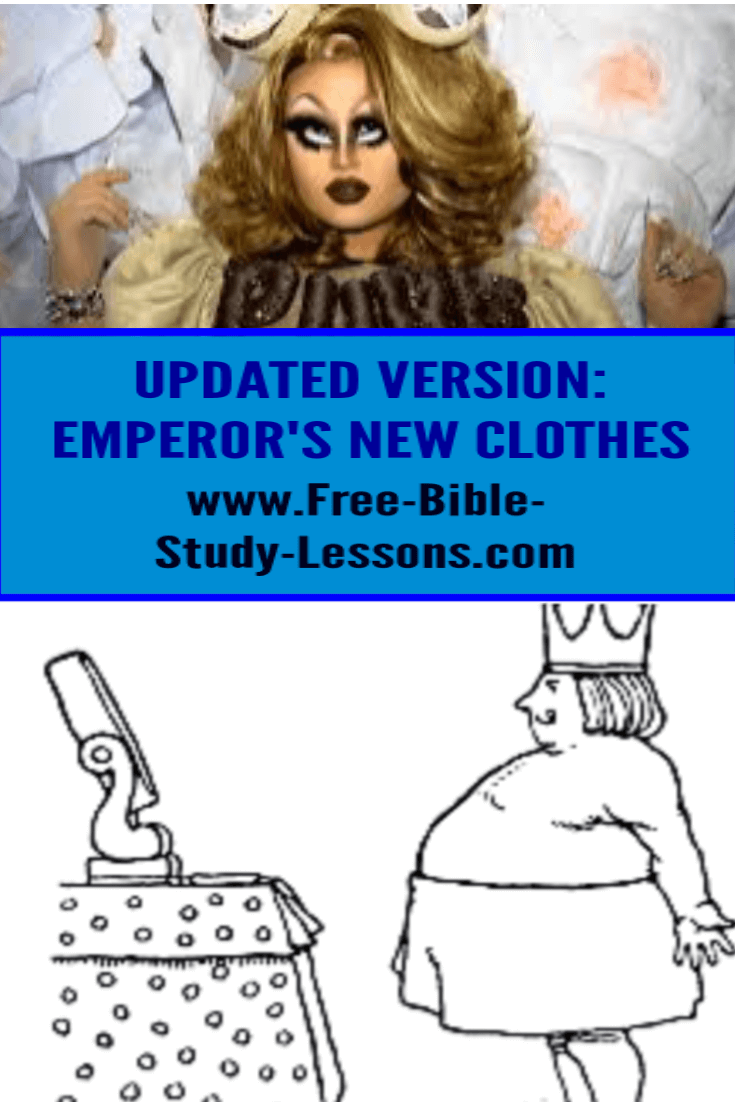 One day the empress, wearing ze’s finest dress, most lavish jewels, and the most marvellous makeup, marched in a parade celebrating the new age of tolerance and love for all.  The media raved about ze’s beauty and intelligence.  The crowd roared what a wonderful empress ze was.  In a moment of silence a clear child’s voice rang out, “But he is a man!”

The parade came to a horrified stop.  The crowd pulsated with shock.  The media was outraged.  A carefully constructed fantasy world was about be to crashed by a few words of truth.  But the emperor was up to the challenge.  He stood to his full height and with great dignity declared that love and tolerance must be given to all.

The crowd displayed the depths of their immense love and the amazing lengths to which they could stretch their tolerance as they hurled profanities at the young child and her parents while dragging them before the emperor.  The emperor smiled a smile of acceptance as he shot the girl’s parents and had their bodies burned to destroy even the memory of such vicious criminals.  The girl was placed in a loving home and sentenced to 12 years of public school brainwashing in order to become a loving and tolerant person.

Somewhere along the way the girl committed suicide.  When he was told of news, the emperor went before the media with tears in his eyes explaining in his loving way that the girl had been so indoctrinated by her parents in the ways of common sense that she had never been able to accept the loving and tolerant ways of fantasy world.  The conflict in values had depressed her to the point of taking her own life.  The emperor immediately vowed to root out all people with common sense as vicious criminals and a danger to a tolerant and loving society.  The media was wildly enthusiastic with the emperor’s wise and inclusive policy.

Oh, the joy to live in such a loving and tolerant society.   Where is all the love and acceptance?

But from the world of reality…

“Since they didn’t bother to acknowledge God, God quit bothering them and let them run loose. And then all hell broke loose…They made life hell on earth with their envy, wanton killing, bickering, and cheating…They keep inventing new ways of wrecking lives. They ditch their parents when they get in the way…And it’s not as if they don’t know better. They know perfectly well they’re spitting in God’s face. And they don’t care—worse, they hand out prizes to those who do the worst things best!” Rom. 1:28-32, The Message

For more information about Glenn Davis see our About Glenn page and/or his Author's Page on Amazon.