In this modern world Christianity and Christians are often looked upon as being prejudice. If it is not directly charged it is implied almost in the daily fabric of humanist society. Movies, TV, newspapers, magazines, enemies, friends, employers, employees, court system...the unwritten accusation is all around.

If we are going to be victorious in our Christian life we have to face this question: Is Christianity Prejudice? If we haven't settled the issue in our own hearts, then we will be fearful, half-hearted, or compromising in our stand for righteousness. [Interestingly, the Bible talks more about righteousness than it does about faith...must be an important topic.] 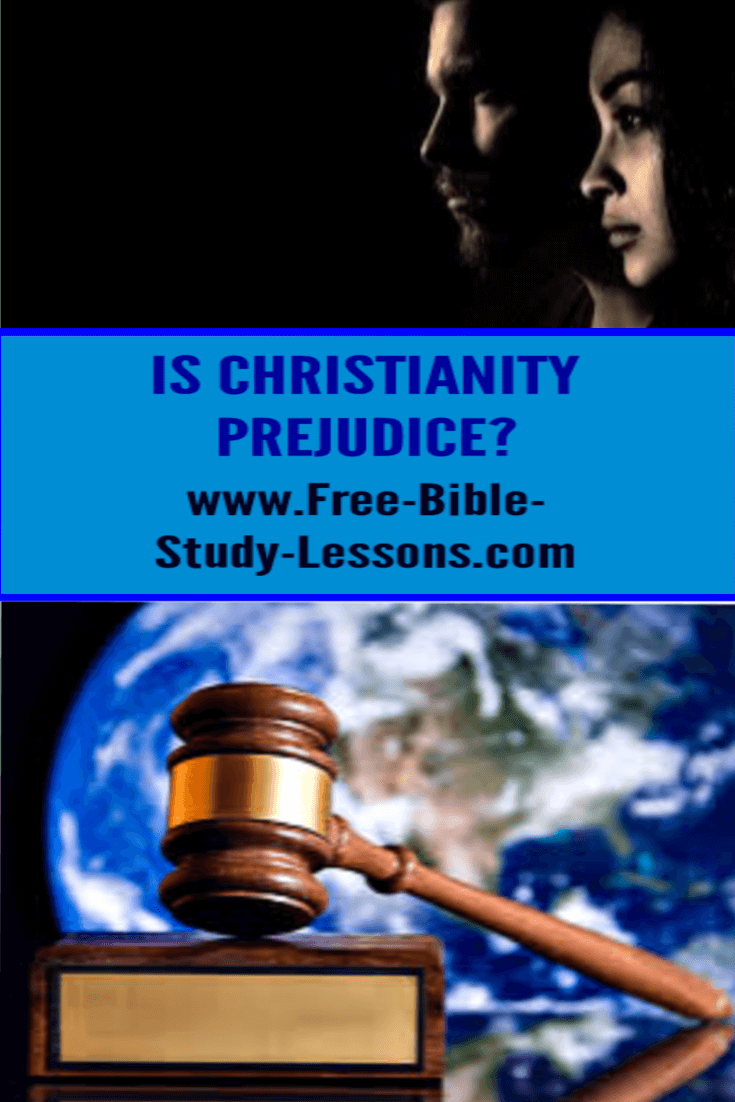 Let's begin by recognizing this is a trick question designed to intimidate Christians into silence. No one likes to be looked on as prejudiced or intolerant, which is then equated with being unloving and closed-minded. Why is this a trick question? Because there is no such thing as total toleration. EVERY person, group, and religion tolerates certain things and is prejudice against other things. For example, the humanists, who preach toleration, are extremely prejudice against Biblical Christianity.

Here is an example from the physical world. People in the construction industry are intolerant...yes, even prejudiced...against using bubble gum to join the studs in walls together. Imagine that! Maybe the bubble gum manufacturers should file a law suit against such close-mindedness. Yet, strangely enough, when I am buying a house I am glad for that prejudice attitude.

Ridiculous example? Yes, and yet no more foolish than charging Christianity with being prejudice for standing against certain activities that the Bible declares destroys people and societies. It is the humanists who are trying to build a world using bubble gum to hold it together and loudly cry "intolerance and prejudice" against anyone who would oppose them. Often Christians are not confident enough in their own position to stand up and declare, "Your way doesn't work. You are murdering people and societies with your pretended toleration. And we will not stand by and watch it happen."

"Also thou shalt not oppress a stranger: for ye know the heart of a stranger, seeing ye were strangers in the land of Egypt." Ex. 23:9, KJV

"But the stranger that dwelleth with you shall be unto you as one born among you, and thou shalt love him as thyself; for ye were strangers in the land of Egypt: I am the LORD your God." Lev. 19:34, KJV

"Thou shalt not oppress an hired servant that is poor and needy, whether he be of thy brethren, or of thy strangers that are in thy land within thy gates:" Deut. 24:14, KJV

"Ye shall not eat of any thing that dieth of itself: thou shalt give it unto the stranger that is in thy gates, that he may eat it; or thou mayest sell it unto an alien..." Deut. 14:21, KJV

Also there are some things which God requires of His own children that are not general requirements. In the above example, God required His people not to eat of animals which died naturally. However, that was not imposed on non-believers. In fact, the people of God could sell such animals to others, but not partake themselves. Modern examples would be church attendance and tithing. They are requirements for Christians, but not to be forced on non-Christians - although they will answer to God.

How this applies depends somewhat on where we live. The Old Testament Law was written to govern a Godly nation. All nations are to live to this standard and will be ultimately judged by it. We are to work towards this overall objective. However, to greater or lesser degree, we all live in ungodly nations - which includes Canada and the US. We need to:

1. Stand without compromising or be ashamed for the righteousness of Christ and the standard of the Bible. This will often lead to persecution - many times from WITHIN the Christian community. Even Jesus had more problems with the religious than the "sinner."

2. We need to have compassion and love the ungodly. We are not to be harsh or judgmental. We are to love people to Christ. The old saying, "He who serves, rules" is often true. Many times the best way to win is not a direct assault, but a gentle service - searching out and unselfishly meeting the needs of people.

3. We need to study the Word of God to know how God intends things to work. [The Biblical Law course is a good place to start.] Until we know how things are supposed to be we will never know how to work to get there. Many times we are simply pushing our own agenda or predudices instead of searching out and applying a truly Christian world-view. We need to study and pray for God's stragedy in every specific situation.