Responsible lying? Isn't that a contradiction in terms? Isn't failure to tell the truth the action of irresponsible people trying to get out of trouble or deceive an innocent victim? Isn't it strongly condemned in the Bible as one of the things God hates? How can it be responsible to lie?

In the vast majority of cases, telling falsehoods is condemned in the Bible, although there is a special case where it can actually be a sin to tell the truth. Let's be very clear at this point. The Bible does condemn lying in normal circumstances. In fact, society is based on truth telling and begins to fall apart when lying becomes common [i.e. distrust, law suits, etc.]

It is clear we must never lie to cover up wrong doing on our part or on the part of someone else. We must not use lying to deceive or hurt an innocent person or business. The truth is our standard.

However, sometimes in being true to God we have to lie to men. Confused? Scripture is our standard so let's take some Biblical examples. 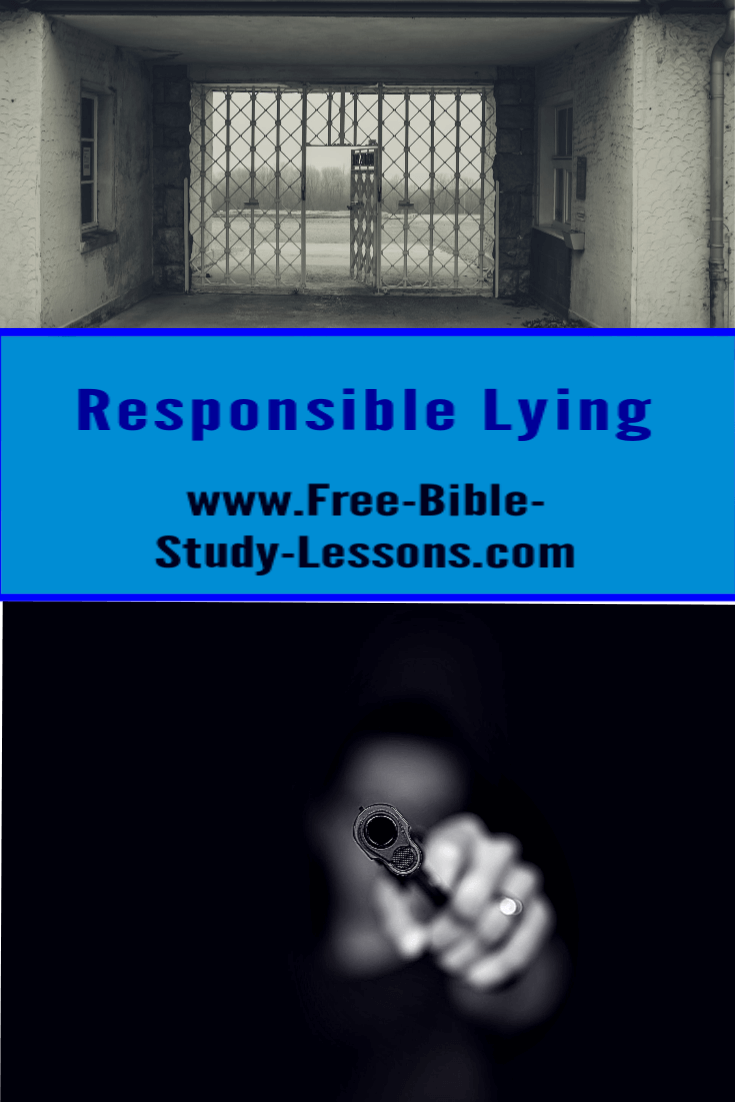 First, we have the Hebrew midwives:

And the king of Egypt spake to the Hebrew midwives, of which the name of the one was Shiphrah, and the name of the other Puah: And he said, When ye do the office of a midwife to the Hebrew women, and see them upon the stools; if it be a son, then ye shall kill him: but if it be a daughter, then she shall live. But the midwives feared God, and did not as the king of Egypt commanded them, but saved the men children alive. And the king of Egypt called for the midwives, and said unto them, Why have ye done this thing, and have saved the men children alive? And the midwives said unto Pharaoh, Because the Hebrew women are not as the Egyptian women; for they are lively, and are delivered ere the midwives come in unto them. Therefore God dealt well with the midwives: and the people multiplied, and waxed very mighty. And it came to pass, because the midwives feared God, that he made them houses. Ex. 1:15-21

Second, we have the case of Rahab:

And the king of Jericho sent unto Rahab, saying, Bring forth the men that are come to thee, which are entered into thine house: for they be come to search out all the country. And the woman took the two men, and hid them, and said thus, There came men unto me, but I wist not whence they were: And it came to pass about the time of shutting of the gate, when it was dark, that the men went out: whither the men went I wot not: pursue after them quickly; for ye shall overtake them. But she had brought them up to the roof of the house, and hid them with the stalks of flax, which she had laid in order upon the roof. Joshua 2:3-4

Very clearly these two sets of women lied. As much as many Christians would like to ignore that fact, it is still a fact. They were faced with life and death decisions and they chose to lie in order to protect innocent lives.

In the case of the Hebrew midwives, they placed their lives on the line. If they had directly refused Pharaoh's cruel order, it would have meant instant death for them. As it was, by lying they saved not only their own lives but the lives of baby boys until Pharaoh had his own people carry out his orders. Lying was the only method they had to save lives. Notice, God honoured and rewarded them for it and never condemned their method.

Look at Rahab. She could have told the king's soldiers the truth. Her own life would then have been out of danger, but the two Israel spies would have been killed. By lying she put her own life in danger and committed herself to the people of God. Lying was an act of courage which defied the forces of evil trying to destory Godly people. By this act she became an ancestor of Jesus Christ.

By faith the harlot Rahab perished not with them that believed not, when she had received the spies with peace. Heb. 11:31

Likewise also was not Rahab the harlot justified by works, when she had received the messengers, and had sent them out another way? James 2:25

Notice, it was because Rahab was a woman of faith that she did what she did. Because she believed God, she placed her own life on the line and lied to protect His people. The inspired writers of the New Testament honour her and do not condemn her methods. If anything, the fault lies with the evil men who forced her into such a situation.

What are some modern applications?

Imagine you are a Christian in occupied Europe during WWII and know the location of Jews who are hiding. The Nazi's knock on your door and ask if you know where Jews are. What is your answer?

Think if you are a Christian in a persecuted country today. A government soldier waves a gun under your nose demanding to know where the underground church is meeting. Do you in self-righteousness tell the truth, condemning innocent Christian brothers and sisters to prison, torture, and death, or do you come up with a convincing lie? What is really pleasing to God?

This also makes legitimate the use of deception in a just war to deceive the enemy. Note: We are not allowed to lie about the character of the enemy, i.e. we cannot make them more evil than they are or claim they are committing atrocities that they are not.

Think about the following situations. If you know the answer are you obligated to tell the truth?

- An abusive husband seeking the location of his wife.

The Bible answers no. Evil people who misuse the truth have no right to the truth.

Let's look at a couple of objections.

First, some say the midwives and Rahab are commended because they saved lives, but their methods are not condoned. This is an assumption from silence because Scripture never condemns them for the methods they used. In fact, in each case, without lying innocent people would have suffered and died. There was no other option. It was the method that got the desired results.

Also, the above statement falls back on the humanist idea of "the ends justify the means." It is saying that God will reward us if the end result is good even if our methods were wrong. This is the wrong message! Both our methods and our end product must be holy. Yes, God does limit our ability to war on evil - our methods must be righteous. From the above examples, lying to evil men who would abuse the truth is not one of the restrictions.