History has been full of great women of faith who knew how to stand firm in their faith. Faith in the Lord Jesus Christ often brings out great opposition and men, women and children have had to face tremendous trials. Below are five women of faith that I find inspiring. After you have read about them, you can add your own woman of faith, tell us a little about her and why you find her inspiring. 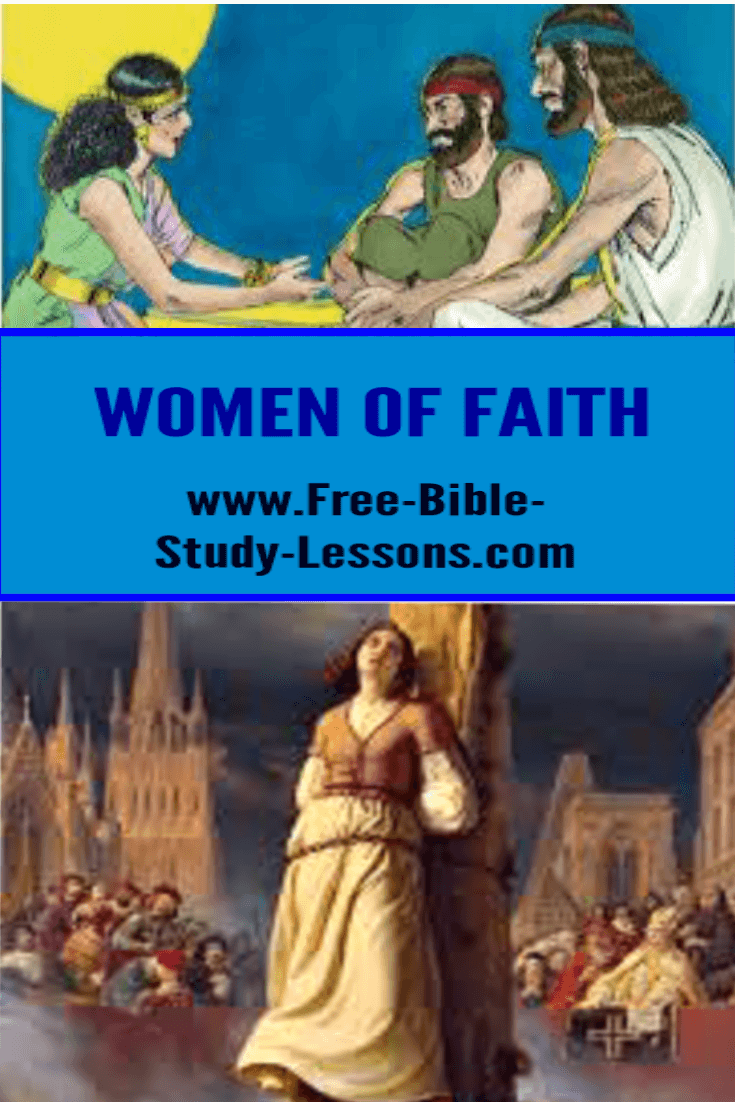 Rahab is an inspiring example of faith under fire. She began as a heathen harlot in a perverse culture. Her story is told in Joshua 2.

Just as the rest of the people in Jericho, she heard about what God had done for the Israelites. They knew the mightiest nation on earth at that time had been brought low by the God of these people. The people of Jericho were scared, but determined to resist at all costs.

Rahab had a different heart. She was one of the women of faith. She wanted to know this God. When there is a sincerely desire to know God, God will provide an opportunity. This was a once in a lifetime chance. Rahab would have to courageously seize the moment or be destroyed with the rest of the inhabitants.

The opportunity was not risk-free. God's opportunities never are. She would have to exercise her faith. She would have to abandon her gods, go against everything she had been taught up to that point, leave her profession, reject her peers, lie, commit treason, and risk her very life. She would have to believe that a God she didn't know would accept her and protect her and that an inexperienced group of ex-slaves could defeat a strong fortress defended by highly skilled warriors. This was faith on the firing line. It was all or nothing. No half-hearted 'maybe' here. Her destiny on earth and in eternity was in the balance.

We know that God did come through for her. Her faith was rewarded and she was able to join the covenant community. She become an ancestor of Jesus Christ. I think Rahab is one of the greatest women of faith the world has ever seen.

Mary, The Mother Of Jesus -
Time Of Augustus Caesar

We often think of Mary the mother of Jesus in terms of her obedience and the great privilege she had. She is also one of the great women of faith. Consider...

We don't know for sure how old Mary was when she was approached by Gabriel, but she was probably a young teen. As a Jewish girl she believed the prophets and in the coming Messiah. That probably wasn't too hard as it was her entire culture; however, it was not just a belief based on what she was taught, it was also a deep personal conviction. How do I know? Just riding on someone else's beliefs or going along with peers/culture would not have taken her through everything she would have to go. Someone else's faith will never sustain you.

Why is Mary one of the women of faith? She had to believe that as a virgin she would give birth to the Messiah. "Greater" people than she had stumbled at less. Zechariah was stuck dumb for a season because he didn't believe his wife could have a son in their old age. Even the father of faith, Abraham, and his wife had doubted they could have a son in their old age. Mary was asked to believe that something that had never happened before - and would never happen again - would indeed happen to her. Her faith rose to the occasion.

Mary had faith that God would look after her even though she had no reason to hope her intended husband would believe her. Certainly she knew her peers and elders would scorn and reject her.

Mary had faith that her firstborn, Jesus, was the Messiah. Except for the events of His birth, He seemed so ordinary. He laughed, He played, He needed comfort, He cried. He acted just like every other child except He did not commit sin.

Mary is a great example of faith in God in spite of the fact the message was impossible and the personal opposition and rejection would be great. She also is one of the greatest women of faith.

Moving past Biblical History we come Perpetua. I believe she is the first female martyr of whom we have a detailed account. The reason we have such an account is that she kept a diary while in prison which has been preserved.

Perpetua was a young married woman with an infant son. She lived in Carthage, North Africa and was the daughter of a wealth Roman. She could read and write and was well-educated. In fact, she had everything going for her that a young woman of that time could have.

Somewhere along the line she converted to Christianity. She learned to love Jesus, but her faith was to be severely tested. Being a Christian was a crime.  She and some others were arrested one day. She was, of course, separated from her much-loved infant son.

At her trial her father pleaded with her to deny her faith. Actually, she didn't have to do or say very much. All she had to do was to offer a pinch incense to honour the Roman gods showing her loyalty to the Roman Empire. That was it. No renouncing of faith or denying Christ. Just a simple pinch of incense to the Roman gods and she could have her son back, go home with her father, and live the comfortable lifestyle she was used to. Not much of a compromise. As one of Christ's women of faith she refused to deny the Lord Jesus in any way and suffered martyrdom in the arena.

Joan of Arc was an amazing woman of faith. Even as a pre-teen she was known as a person who honoured the church. She would lay flowers on the altars of St. Margaret and St. Catherine. Even though she enjoy playing with the other children, she was often teased for her praying and religious devotion.

Her parents were ordinary country people in France. When she about 12 to 13 years old she first heard her Voices. First it was St. Michael, and then St. Catherine and St. Margaret. These Voices were to direct her through the rest of her life. It is inspiring to follow her life as she fought to liberate France from the English. Although a simple country girl, she had to convince the French leadership that God was really speaking to her through the Voices. Through faith she followed the instructions of her Voices as they led her into battle, answered the questions of theological doctors, faced betrayals and double-crosses, and more. Her short life was filled with danger at almost every point and yet she never backed down.

Only once that I know of did she disobey her Voices and that was when she was in an English prison and tried to escape. She was also tricked into signing a confession that she later retracted. Nevertheless, she was a brave lady full of faith.

To be honest, I wondered about the source of her "Voices." But the time in history was one when people looked to the "saints" and God often works with us according to the limit of our understanding. What convinced me of the genuineness of her faith were her last words. As she was being burned at the stake the last words on her lips were: "Jesus, Jesus, Jesus." She deserves to be listed with the women of faith.

It is well worth reading a history of Joan of Arc.

Sabina Wurmbrand was a women of faith in the modern era. In Romania during WWII she and her husband, Richard, would rescue Jewish children from the ghettos and were involved with the underground Church. Several times they were arrested, but it did not stop them.

After the communists took over, Sabina would witness bravely to the soldiers themselves. Richard and Sabina were heavily involved with the underground church under the communists as well. Richard was arrested and spend a total of 14 years in prison many times enduring inhuman torture. Sabina herself spent 3 years in a slave labour camp while her young son had to live on the streets.

Eventually she and Richard were able to come to the West and there they established The Voice Of The Martyrs.

The incident which strikes me the most about this woman of faith happened after the communists took over. She and her husband, who was a pastor, were attending a conference. Church leader after church leader rose to the podium. Each one praised the communist party and encouraged all Christians to support the communists. Sabina told her husband to speak up and wipe the shame from the face of Christ. He reminded her it might mean his imprisonment or death. She replied that she did not want a coward for a husband. Her faith in Christ would not allow her to value even her beloved husband above Him. No matter what the cost, she would stand firm in her faith as one of God's outstanding women of faith.