Traits of Great Women
And Men Of God

”And such as do wickedly against the covenant shall he corrupt by flatteries: but the people that do know their God shall be strong, and do exploits.” Dan. 11:32

Great women and men of God have some common characteristics.  What are they?  When I say "great" I don’t necessarily mean the ones who do exploits. Many exploits can be done in the flesh as well. A great woman or man of God is one who knows their God. Often that will lead to exploits or great acts for the kingdom of God, but the key is they know their God.

I particularly thought about the life of Hudson Taylor [if you haven’t read his biography, you should] as I thought about this list , but it seems to apply to all. There may be some points which are not in every life; however, I think you will find that generally most of them are there in people who really know God. 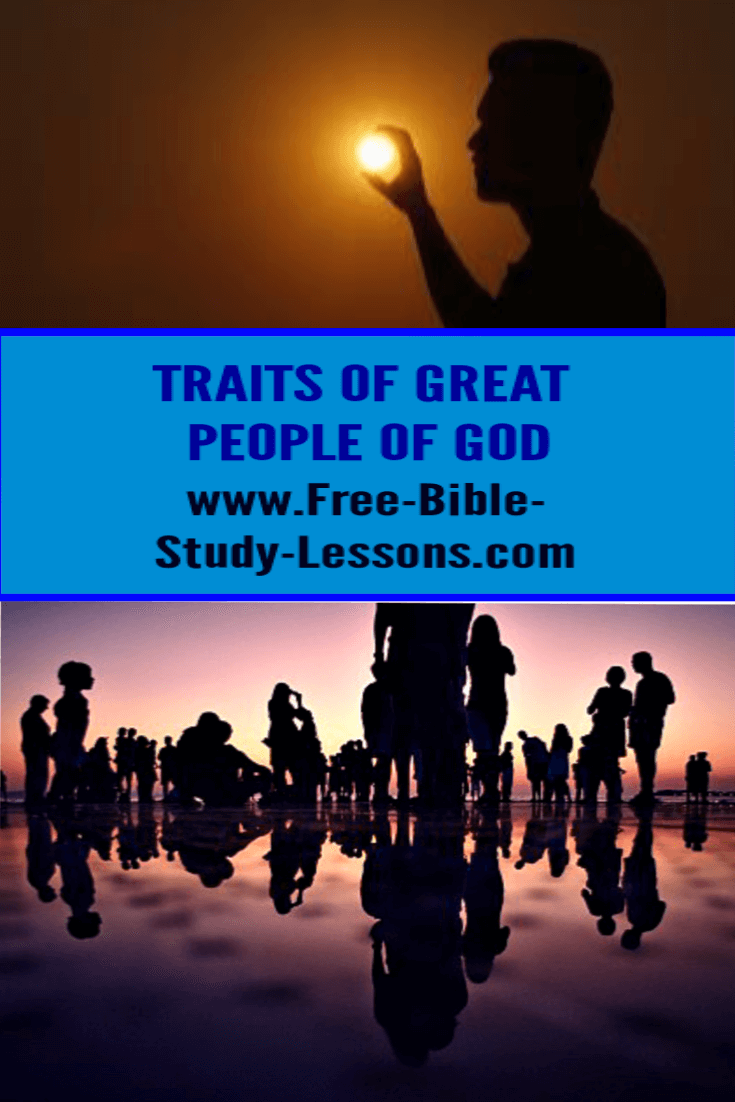 1. Women and men of God are humble people. You don’t find them pushing themselves ahead. In fact,  many times the people around them don’t even notice them, but God does.

2. They are often called to do things in a different way. By listening to God they are led in paths strange and unacceptable to their peers. In Hudson Taylor’s case he, among other things, adopted Chinese dress and manners full time. He was the first to do this on a permanent basis [Others occasionally wore Chinese dress when going to minister, but that was it].

3. Women and men of God often faced much opposition from within the Christian community. Hudson Taylor was sharply criticized and treated rudely both by fellow missionaries and by people in his home country of Britain. God help us never to criticize a person of God just because what they are doing is unusual.

4. They are often not recognized as great by the people around. Often they are overlooked until [and sometimes not even then] they have been successful in what God has assigned them to do.

5. They often go through intense personal struggles. As it were, they wrestle with the angel of God working through times of doubt, not knowing the purposes of God, fear, and other emotions.

6. Women and men of God have a great sense of their own sinfulness, weakness, and unworthiness but they also see God’s grace, mercy, and strength. The closer a person walks with God, the less pride becomes an issue. When we really see God and our own position without Him, pride has no chance. As I look at some of these men and how they felt about their own lives, I hate to think about where my life is. Being blind I think I am rich when I am poor. God help us.

7. Many times they had to stand alone. Many times - during the dark days - it was them and God. All [or the majority] of other voices were against them yet they held onto God and He saw them through.

8. Women and men of God were people of prayer. Often hours were spent in prayer, many times with fasting.

9. They had an unshakable conviction in the goodness of God even in the midst of disaster. In Hudson Taylor’s case he buried 3 of his 6 children in China at an early age. Even through the heartache of being by his wife’s deathbed he could thank God for the time they had had to together and trust that even this was the best in God’s plan. How many of us would turn into God’s accusers for far less?

10. Women and men of God are people who love, study, rely on, and apply the Word of God.

11. Often they were early risers, spending time with God in prayer and Bible study before others were even awake. This is especially true if they lived very busy lives.

12. They were men of faith. They believed God for the impossible...and they got it. Both Hudson Taylor and George Muller did tremendous and expense work for God without ever asking for a penny or going into debt. Taylor believed God for 1,000 missionaries to “go where no Christian had gone before” each having no guarantee of income except the promises of God. Note: This is not God’s method for everyone, but He will have some test of faith for everyone since it is faith which pleases God. Men of God know what God is calling them to and do not presumptuously imitate others.

13. God often waited to “the last minute” to provide. In George Muller’s case there were times when he did not know how he was going to provide all his orphans with their next meal...but God always made it before meal time! In Hudson Taylor’s case sometimes it was the money to pay his staff. He was always honest and honourable with them giving them the opportunity in advance to seek other employment if they so wished. God always came through, never late.

14. Women and men of God often had dark days when they didn’t feel the presence of God or struggled with doubts. There are often intense “birth pains” to move another step closer to God. For some of us the cost is simply too great - we don’t want it bad enough. Elizabeth Elliot relates a story of a friend who was seeking, praying, and banging on the gates of heaven for some request. God asked her to fast...and she realized she didn’t want it that much.

15. They treated both the rich and the poor with respect and dignity. They were not respecter of persons. We tend to go to one extreme or the other. We favour the rich because we want their money, or we favour the poor and despise the rich. Judson Cornwall, international speaker and author, relates the peace which came when he realized the ministry wasn’t his source of support, God was. That freed him to follow the leading of God to any church regardless of size. It also freed him from anger with churches who took up offerings for him and “put the check in the mail.” The check never came but somehow the church managed to buy a new organ! Even those of us who work at a “normal” job have to realize that God is our source not the employer He is using at the moment.

I hope as you consider these points you will find them helpful in your walk with God.