Because of the words of Jesus in Matthew 5:39, “resist not evil,” some Christians feel that resisting evil is wrong.  This belief is held by some sincere Christians who honestly want to follow the Lord Jesus in every way, regardless of the cost.  It is also held by cowardly Christians who are looking for a way to evade responsibility.  Even the unGodly will quote Scriptures like Matt. 5:39 to try to stop opposition from Christians.  Whatever the motive, it tends to lead to a doormat Christianity that fatalistically accepts everything as God’s will.

If not resisting evil in any form is what Jesus meant, then, of course, we must be obedient.  However, we need to know what Jesus meant by what He said.  As Feed Yourself students learn, we must study context to understand the true meaning.  No Scripture out of context can be correctly understood.  Before we look at Matt. 5:39 specifically, we are going to look at general applications, the actions of Jesus and the apostles, and what ‘evil’ refers to. 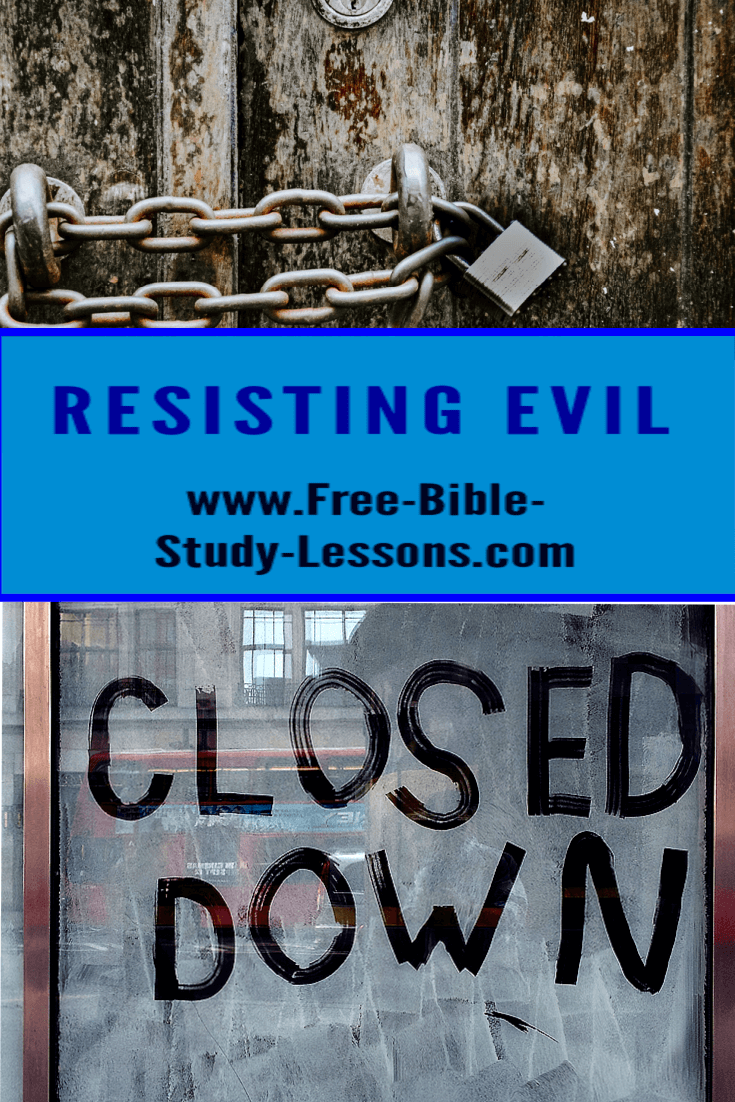 Let’s take a quick look at the word ‘evil’ that Jesus used in Matthew 5:39.  It is used 71 times in the New Testament.  It is usually translated as ‘evil,’ but sometimes as ‘wicked,’ wicked one,’ ‘evil things,’ grievous,’ etc.  Its meaning can be ‘full of labours, annoyances, harassed by labours, perils, causing pain and trouble, of a bad nature, diseased, evil wicked,’ etc.

Ever since Adam ate the forbidden fruit in the Garden of Eden, the human race - and the entire universe - has been infected with evil.  Since that time, satan has been using and manipulating human beings into fulfilling his evil desire to destroy God’s creation and especially His human creation.  We may be seeing this is some aspects of the fight against Covid, especially with its lockdowns spewing death and destruction in every direction.  Some Christians simply cooperate and go along, assuming it is the “Christian” thing to do while people have their lives and livelihoods ripped to shreds.  [Where is the compassion of Christ?]

If we are going to be consistent in not resisting evil, we would have to join the fools who want to disband the police force.  After all, the main goal of the police department is protecting people by resisting evil people.  We would also need to disassemble the military because their purpose is to resist evil people and nations from invading our nation.  Of course, the courts, which are supposed to resist evil by punishing the evil people in society, would have to go too.  One of the definitions of ‘evil’ is disease, so doctors, nurses, and paramedics would need to be disbanded as well.  In fact, most occupations have some element of resisting evil to them.

So, how serious are we about not resisting evil?

As far as we know, Jesus had very little interaction with the governing Roman authorities until He met Pontus Pilate.  He did call Herod a fox [Luke 13:32], which was not intended as a compliment.  When Jesus stood before Pilate, He knew the Father’s specific purpose for His life was the crucifixion; therefore, to resist Pilate would have been to resist the will of God.  Nevertheless, Jesus did not excuse Pilate for his unjust actions but told him that he would be responsible for them [John 19:11].

While Jesus did not have much to do with the Romans, He did have a lot to do with the Pharisees and Sadducees, who were both religious and political leaders.  Jesus certainly did not respond to them with physical violence [or condone it]; however, He strongly opposed these evil men.  Jesus called them liars [John 8:55], children of the devil [John 8:44], and tombs full of dead men’s bones [Matt. 23:27].  He continually warned His disciples and the general public against their false teaching and bad examples.

Did The Apostles Resist Evil?

Peter and John resisted the evil commands of the Sanhedrin through disobedience [Acts 4:5-22].  Peter and the apostles opposed the Sanhedrin and bluntly accused them of causing the death of the innocent Man, Jesus Christ [Acts 5:27-32].  Paul resisted evil at one of his trials by deliberately causing division [and almost a riot] [Acts 23:6-10].  When an evil magician tried to prevent the gospel from being shared, Paul bluntly resisted him, harshly criticized him, and even worked a reverse miracle to cause temporary blindness [Acts 13:8-11].  Peter was a Godly man, but when he slipped into evil actions, Paul publicly resisted him and his actions [Gal. 2:11-14].

Consider the famous section of Scripture on the armour of God - Eph. 6:10-17.  In it we are reminded that our fight is not against human beings but the spiritual forces that are motiving them.  There is sometimes confusion on the idea of spiritual warfare.  Jesus said that His kingdom was not of this world [John 18:36].  He did not mean that His kingdom existed on an entirely different plane with no impact on the current physical world.  He meant that the source of the kingdom of God and its authority was not of this world.  In His grace, God uses people to establish His kingdom on earth so that it rules over all - spiritual and physical.

In a similar way, satan uses people to try to destroy God’s kingdom and all things good.  So we recognize that the source of the evil actions is spiritual, not merely physical.  That does not mean, however, that we don’t resist the actions of evil people.  We are specifically told that in the “evil day,” we should be resisting.  This resistance is on the spiritual level AND its manifestations in the physical realm.  It is a spiritual war fought on a physical plane.  It certainly is an evil day when an estimated 150 million people are being driven into extreme poverty, and millions more are having their lives and families destroyed by senseless and useless lockdowns in this War on Freedom, which pretends to be a war on Covid.

Do Not Resist Evil

Considering that Jesus and the apostles did resist evil people and evil actions, how are we to understand the words of Jesus in Matthew 5:59?

“You have heard that it was said, ‘Eye for eye, and tooth for tooth.’  But I say to you, do not show opposition against an evil person; but whoever slaps you on your right cheek, turn the other toward him also. And if anyone wants to sue you and take your tunic, let him have your cloak also.  Whoever forces you to go one mile, go with him two. Give to him who asks of you, and do not turn away from him who wants to borrow from you.  Matt. 5:38-42

What is our context?

Here Jesus quotes one of the laws of Moses.  Remember, if Jesus ever broken the Mosaic Law, condoned or taught the breaking of the Law, then He was not perfect and could not die for our sins.  Jesus is not overturning the Mosaic Law, but showing a balancing principle.  The “eye for eye” law was laid down as God’s principle of justice in a court of law.  In today’s language, we would say something like, “let the punishment fit the crime.”  It was never intended to be a justification for a personal vendetta.

In this passage of Scripture, Jesus is not addressing judges, lawyers, or law enforcement officials.  He is talking to people living under the oppression of military occupation.  This is not a democracy.  They do not have defence attorneys.  Their legal options are almost nonexistent, and going to court is very risky.  In cases like this, cooperation with the person acting unjustly is usually the best course of action.  Resistance could be fatal.  Willingly “going the extra mile” shows the love of God, has the potential to win the person to God as they see love in the face of injustice, and may motivate better treatment in the future.  [It is perhaps in this context that some of the apostle’s instructions on submitting to the government are to be understood.]

This statement of Jesus should not be taken as a universal command, but as a command for certain people under specific conditions.  If we have the ability to stop evil from rampaging through people’s lives and fail to act, we will be held responsible.

So then, while we have opportunity, let’s do good to all people, and especially to those who are of the household of the faith.  Gal. 6:10, NASB

It can hardly be considered “doing good” if we turn our backs and allow others to be trampled under by evil men and laws.  [Also see our course: Christian Social Theory.]

For if you keep silent at this time, liberation and rescue will arise for the Jews from another place, and you and your father’s house will perish. And who knows whether you have not attained royalty for such a time as this?”  Esther 4:14, NASB

If God has placed you in a position where you can resist evil; however insignificant it may seem, you have an obligation before God to do so.