Samson And Delilah
The Manipulator

The story of Samson and Delilah is one of the most astonishing stories in the Bible.  Delilah was a deceptively beautiful woman who was a master manipulator.  The whole story can be found in Judges 16:4-22.

Samson was a man in love.  Unknown to him, the person of his affections, Delilah, was not in love with him.  Her love was in money and the luxuries it could buy.  The rulers of the Philistines promised her about 26 pounds of silver each if she could discover the secret of Samson’s strength.  Many people picture Samson as a powerfully built man like some modern body builder.  If that was the case, there would have been no secret to his strength.  Samson looked like an average man [or even a weakling].  It was only when the Spirit of God was on him that he could perform amazing feats of strength.  So no wonder why the Philistines were puzzled at how this untrained, average man was doing all these things and beating their professional armies at every turn. 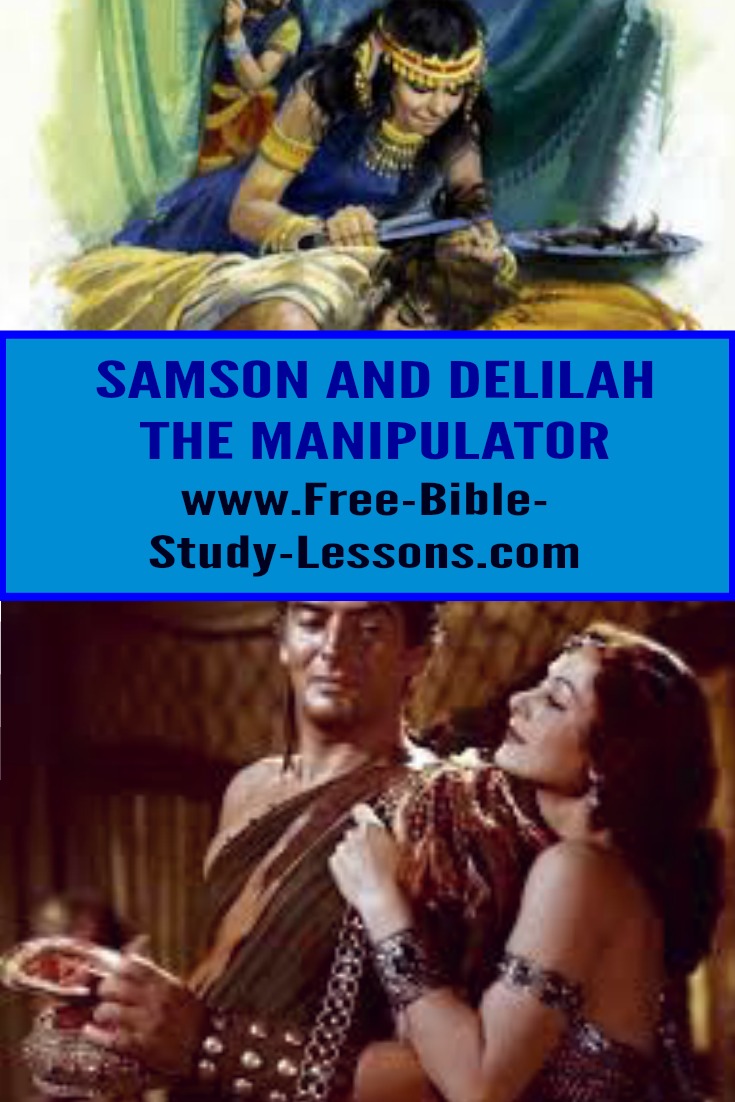 Delilah’s loyalty was to herself.  She set about coaxing Samson to give her the secret of his strength.  He lied the first time.  She tried it, but when he thought he was under attack his strength was still there.  Since only Delilah appeared to be present, he probably laughed it off as a joke.  Two more time she persisted and two more times he lied, she tried it and failed.  But Delilah the manipulator was not to be discouraged by failure.  The reward was too great.

Samson knew from experience that whatever he told her, she would try.  Why did he give her the real secret - which ended up with him being captured, having his eyes gouged out and being treated like an ox while being humiliated and taunted?

“Then she said to him, “How can you say, ‘I love you,’ when you won’t confide in me? This is the third time you have made a fool of me and haven’t told me the secret of your great strength.” With such nagging she prodded him day after day until he was sick to death of it.” Judges 16:15-16, NIV

Notice that Samson became “sick to death” with her constant nagging yet he never left her.  It is not that he was trapped in a marriage to her.  He just had to leave and not come back.  Eventually she got what she wanted - to Samson’s doom.

Samson And Delilah The Manipulator

One of the roles of a wife is to be a Godly counsellor.  It is a wonderful ability that God has given women for the benefit of their husband, their family and of society in general.  Satan, who loves destruction, likes to take this ability and twist it and make counsellors into manipulators.  Delilah used her skills, beauty and charms to manipulate Samson.  Even when her intentions were obvious to anyone looking at it from the outside, Samson was so emotionally entangled with her that he could not believe that she really intended his harm.  [This is one reason why God commands that sex be reserved to after marriage.  It can cloud a person’s judgment of the potential partner’s character.]

This power of women to persuade [can be good] or to manipulate is many times linked to sexual favours or the hint of sexuality, but not aways.  How many daughters have their fathers “wrapped around their little finger” just with teary eyes or pleading voice.  Even a wife may influence her husband apart for any connection with their sexual relationship.

Samson And Delilah:
Who Was The Weak One?

Just as women sometimes fear men because of their ability to use physical violence to gain their objectives, so men sometimes fear women for their persuasive or manipulative abilities.  This lack of trust instead of mutual love and cooperation is what satan and his devils feed on.  I have wondered [conjecture not evidence] that one reason that some religions - including legalistic Christianity - regulate what women are allowed to wear so closely is a fear of this power of a woman as if the sight of a female leg or a certain hair style would drive men mad with lust.

This brings up the question of emotional stability.  Samson was so “in love” - obsession would be a better word as this was not a genuine love relationship - with Delilah that he ignored all the warning signs of danger.  They were so obvious.  Every time he told her how to destroy his strength, she tried it!  Samson allowed himself to be ruled by his emotions rather than look at the facts or seek counsel from someone who could.

Samson And Delilah:
Where Is The Blame?

So who is to blame for Samson’s downfall and, by extension, the downfall of any man in similar circumstances?  The answer is:  Both are responsible for their own actions.

Delilah is responsible for abusing her abilities for her own selfish pleasure.  At first Samson was probably just a curiosity - a famous man with unusual abilities.  Just a toy for entertainment.  Then he became a tool she skillfully manipulated to satisfy her selfish ambition.  She will stand before God judged for her deceit and betrayal.

But Samson is not innocent in this.  The idea of the all powerful woman and the helpless man dangled from her finger tips is not Biblical.  Some men wish it was because if they really couldn’t help themselves - if they really were powerless - then they would not be responsible.  And sinful human nature [in men and women] wants to avoid responsibility and; therefore, judgement.

Samson chose to become involved with Delilah even through she was a Philistine.  He chose to ignore the warning signs.  He chose to keep going back to her.  He chose to tell her his real secret.  He made decisions all along the way.  Decisions He did not have to make and decisions that ruined his life.

Others may tempt us and try to pull us into unGodly ways, but, ultimately, we are responsible for the decisions we make and the consequences that follow whether good or bad.

While not denying the very real power that women can have as influencers and motivators, the idea that women are powerful and men are powerless to resist their manipulations could be one reason why rape victims are sometimes made to feel as if the assault was their fault.  Even judges in a court of law have been know to ask the victim what she was wearing, etc. at the time as if her choice in clothing something forced a helpless man to rape her!  Nonsense.  Victims sometimes feed into this myth of the powerless man by taking the guilt upon themselves.  The only question before the court should be: Was the sex consensual or not?  At times a woman may make poor choices in what she wears, how she acts or where she goes, but that in no way removes the power of decision and responsibility of her attacker.