“Now when the unclean spirit goes out of a man, it passes through waterless places seeking rest, and does not find it.  Then it says, ‘I will return to my house from which I came’; and when it comes, it finds it unoccupied, swept, and put in order.  Then it goes and takes along with it seven other spirits more wicked than itself, and they go in and live there; and the last state of that man becomes worse than the first. That is the way it will also be with this evil generation.”

It is interesting to note that Jesus and the apostles never went “looking for trouble” either with demons or civil/religious authorities. On occasion they would seek out people in need and minister to them, but more often they were preaching the good news to set people free.  They spoke in public places or people came to them.  They fearlessly met whatever came to them, but they were not out instigating confrontational situations.  They only seemed to deal with demons or civil/religious authorities when they were interrupted or attacked while sharing the good news of the gospel. 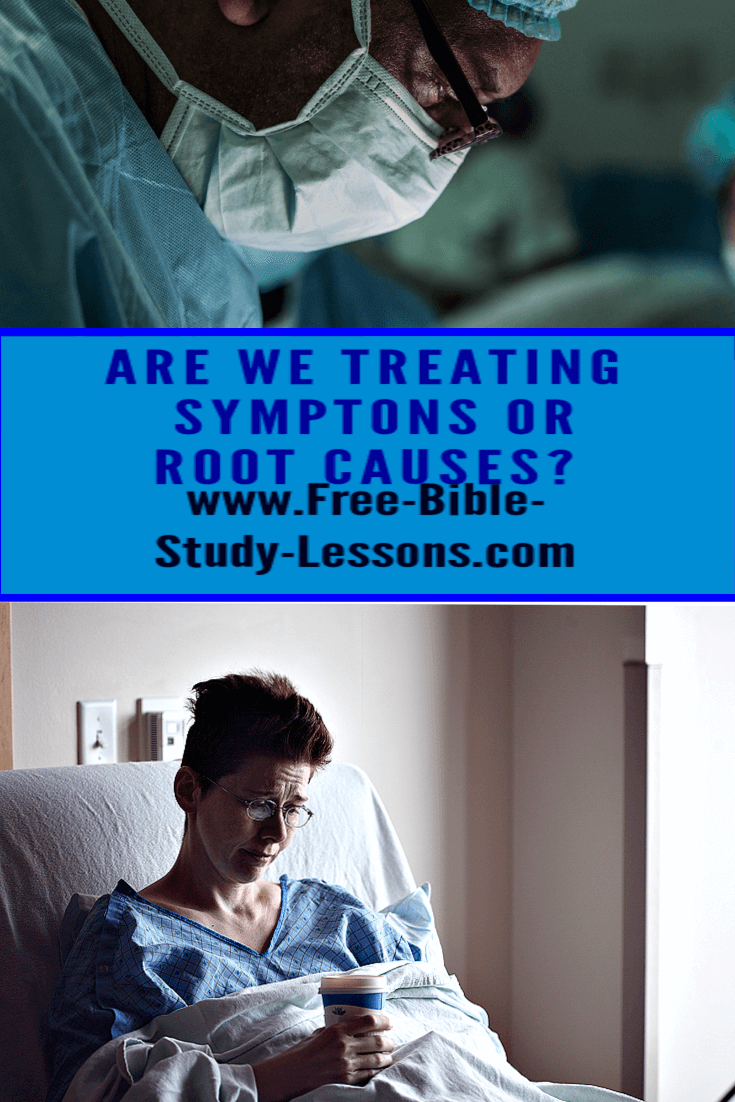 Now I realize in democratic societies, which were are one time Christian-based, we do have a responsibility to stand for what is right, protect the innocent, and vote for the most Godly people available.  However, we can be tempted to forget the root cause of all these problems, social ills and sickness.  Even if we could solve all these problems in our society, if we have not treated the root cause, as the above verses show, we have not really solved anything.  In fact, helping people who do not really want help or are unwilling to make life changes may only make the situation worse for them in the long run.

Does this mean we ignore symptoms?  Of course not.  Symptoms need to be dwelt with, but we must focus on the root cause.  It is like an attempted suicide who had swallowed too many pills.  We have to treat the symptoms immediately, induce vomiting etc. but if we don’t deal with the reason why they tried to commit suicide in the first place - if we ignore the root cause - they may try again later or even if they are made to realize that is not the answer the root cause will only manifest itself in a different way.  What is the root cause of all the problems people have and in our society which is fast running to destruction?  It is a simple 3 letter word: SIN.

That’s right.  It’s just sin…rebellion to Jesus Christ.  So how do we solve the root problem?  The same way Jesus and the apostles did…we present the good news of the Gospel.  Jesus has died for our sins!  He has risen to give us new life!  We can have peace with and relationship with God Himself - which is what we were designed for!  When people get right with God and become committed to Jesus Christ their symptoms begin to fade away.  As enough people turn to God, the symptoms in a society - abortion, crime, disease, poverty, etc. - also begin to fade.

Our Western societies are on the verge of imploding and self-destructing.  They have become not only virtually powerless to deal with evil, they actually promote it in many cases.  In the name of freedom, they are destroying freedom.  The fact is, there is no such thing as total freedom.  To give freedom for evil [which is the direction they are headed] is to make slaves of the righteous and to give freedom to the righteous is to make slaves of the evil.  There is no compromise.  One must be dominate in society while the other is controlled.

So while we cannot ignore symptoms, we must never lose focus that people need to hear the good news of Jesus Christ!  We cannot get so caught up in dealing with symptoms - a never-ending struggle if the root cause is ignored - that we forget that what people really need is JESUS!