Who Was
Afraid Of Jesus
And Why?

Who was afraid of Jesus and why?  It is amazing to think that people could be fearful of Jesus.  He was a totally “safe” Person.  Women, children and defenceless people all admired Him and felt comfortable in His presence.  They liked Him and wanted to be with Him.  The religious rulers hated Jesus for exposing their hypocrisy and feared the consequences His actions might have with Rome, but they were not afraid of Jesus as a Person.  So who was afraid?

Then all the people of the region of the Gerasenes asked Jesus to leave them, because they were overcome with fear. So he got into the boat and left., Luke 8:37, NIV 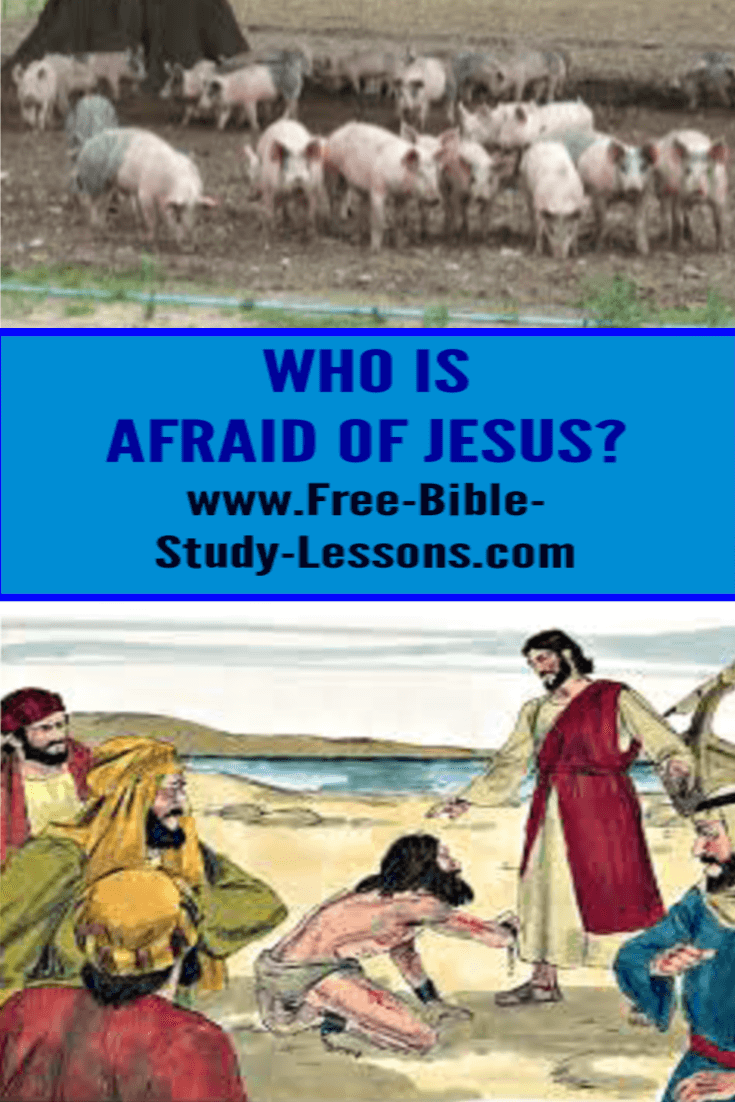 What was it that caused these people to react in such a way?  What did Jesus do?

Jesus had simply sailed across the Lake of Galilee to the region of the Gerasenes.  As He had landed with His disciples He had been confronted with a demon-possessed man - a man that no one had been able to control.  Jesus had freed the man and for a reason known only to Himself, He had granted the demon’s request to go into a nearby herd of pigs rather than go into the Abyss [bottomless pit].  The pigs had been driven mad and rushed down a steep slope plunging into the lake and drowning.  The pig shepherds had gone and spread the news of what had happened all around.  A crowd had come to see what had happened for themselves.

These people from the region of the Gerasenes had undoubtedly felt the anger or disgust of Jews for making a career out of such unclean animals, but Jesus had not criticized them for their profession.  It was not the loss of their property or investment that caused them to be afraid of Jesus.  If anything, that would have made them angry.

Jesus had actually helped them.  They had been unable to control these two men [Luke only mentions one man, but Matthew tells us there were two].  These men were a danger to themselves and others.  Now they were delivered and ready to be productive members of society.

Why Be Afraid Of Jesus?

Power They Could Not Control

When the townspeople arrived on the scene, they saw the formerly demon-possessed men, clothed, in their right mind and sitting at the feet of Jesus.  This was a power far beyond anything they had seen or even imagined.  He was Someone Who could control the spirit realm.  It was scary.

If Jesus had that kind of power, then He could not be controlled.  They had heard what had happened to the pigs and knew the Jews considered Gentiles unclean, too.  What would happen to them?  They would have to trust Jesus.  Instead of opening themselves up to Jesus and receiving His love and forgiveness, they allowed fear to drive a wedge between them.  And Jesus, being a Gentleman, was not about to force Himself on them.  At their request, He left.

Non-Christians can often experience this fear of Jesus as well.  The fear of the unknown, the uncontrollable…of change.  If they dare to open up their lives to Jesus what will happen?  Will they be condemned like unclean animals?  Will they be rejected?  So much pain, so much sin.  It might be better to hide behind masks than risk being hurt again...  After all, if God rejects you…where else can you go?

Christians are to be the answer, but often they are part of the problem.  Jesus never interacted with people as they were, but as He knew they were created to be.  For example, He didn’t condemn a prostitute for her actions, He saw a daughter of God who was valuable beyond measure and only needed genuine love and forgiveness.  Christians are to be a "safe" people - an expression of that love of God so people who do not know Him can be drawn to the Truth.  The Truth is Jesus is a “safe” Person Who loves them, values them, wants their best and will never force Himself on them.  Unfortunately, Christians [or those using the name] can be harsh, condemning and critical driving people further into sin and away from God.  Satan loves those Christians.

What about us, as Christians, are we afraid of Jesus?  Ridiculous?  Have you even been in a service where the Spirit of God was moving and felt fear?  Was it fear that a secret sin might be exposed?  Fear that you might do something that would embarrass you?  Fear that you would not be in control?  Let’s face it, we all like to be in control.  Have we stepped back, in effect asking Jesus to leave us alone, only to discover, as a Gentleman, He did?  What did we miss because we allowed fear instead of faith to drive our lives?

Another reason they may have been afraid of Jesus was the realization that if they accepted Him, it would mean a radical change of lifestyle.  On several occasions, when Jesus forgave someone, He specifically said, “Go and sin no more.”  That only works for people who are sick of their sin and want to change.

These people did not want to change.  They were content where they were.  Many times people - Non-Christians and Christians - push Jesus away because they do not want to change.  They are happy in their sin and the consequences seem far away.  Or they are too afraid of what the change might bring.  Jesus did say to count the cost [Luke 14:28-33].  For some people, the cost is too high.

And Jesus gets into His boat and leaves…