Why Are You Afraid?

He replied, “You of little faith, why are you so afraid?” Then he got up and rebuked the winds and the waves, and it was completely calm.  Matt. 8:26, NIV

Jesus asked some crazy questions such as, in this case,  “Why are you so afraid?”

What is so crazy about that?  Consider the context.  The disciples were caught in a violent storm in the middle of the lake.  The boat was being swamped.  Remember, most of these men were experienced fisherman.  They had been on this lake thousands of times.  They had been caught in storms before.  They knew how to handle boats…and they knew when death was staring them in the face.  If they were afraid it was because they saw the spectre of death rising before their eyes and knew it was imminent.  The few land lubbers, like Matthew, had probably already fainted!

While the storm raged, Jesus was sleeping in the back of the boat…sleeping in the moment of crisis!  In the panic of fear the disciples shake Jesus awake - not that they really thought He could do anything about it because they were totally shocked when He did.

Jesus wakes up from a sound sleep.  He looks around.  He sees the waves coming over the side of the boat already half filled with water.  He feels wind lashing His face.  And He wonders what the problem is…”Why are you afraid?”  From the disciple’s perspective this was a crazy question - what sane man wouldn’t be afraid? - but from Jesus’ perspective it was a natural question. 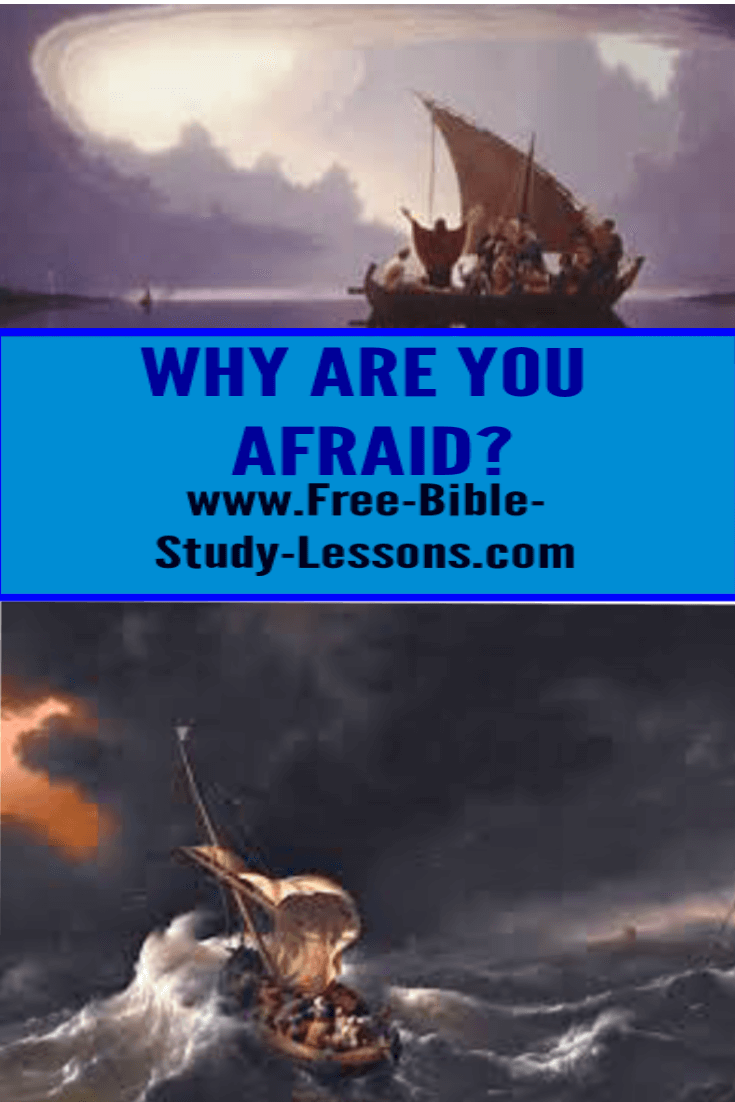 Think about this.  The disciples had followed Jesus onto the boat [vs. 23].  This had not been their idea.  They had not launched out on some project of their own and dragged Jesus along [as we sometimes do].  No, Jesus had led them into this situation.  Sometimes we think that if we follow Jesus the seas will always be calm.  Not so.  Sometimes we can be in the centre of God’s will and be facing a storm that threatens to swamp our boat…but if Jesus is in the boat we can be at peace.  He is not going down!

The point is not that we never face fear.  We are human.  And we are in the process of growing in our faith in Christ.  I doubt any of us has reached the point of perfect faith.  I know I haven’t.  Dangerous situations come up.  Times of uncertainty and confusion surround us.  Doubt assails us.  It is not that we don’t feel the emotion of fear during these times, but that we know what to do about it.  We do not allow panic to set in that drives us like a rudderless ship before a hurricane.  We do not lash out at those around us - or at God - in pain and confusion.

No, we turn our eyes on Jesus.  We focus on Him.  We allow Him to calm our spirits - whether the situation changes or not.  We run to our strong Fortress.  We bury ourselves in His arms.  We move ahead - perhaps only one step - but we do not allow panic to dictate our actions.