Forgive Us...
As We Forgive Others 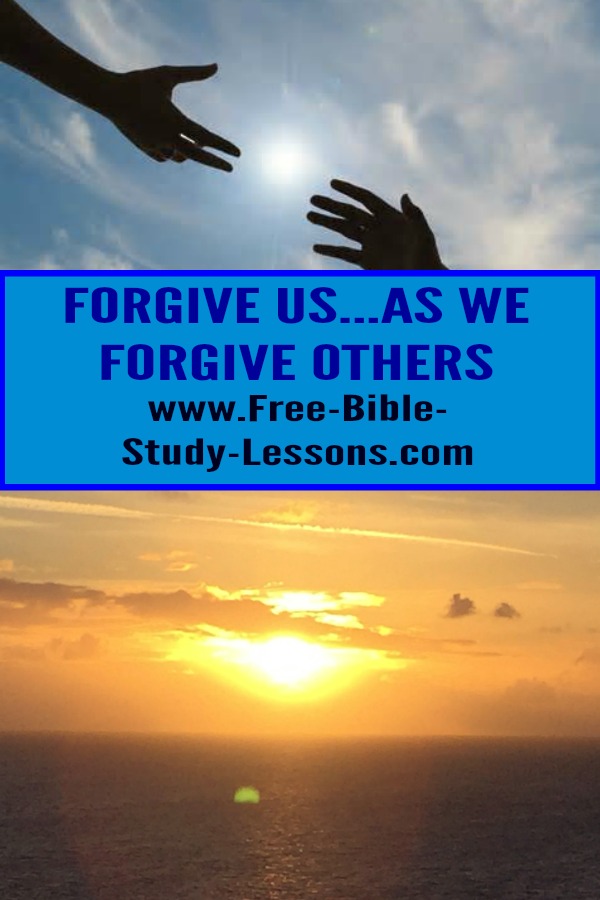 We need God’s forgiveness.  We have violated Him to depths we can never even understand.  Our sins have placed us firmly under the just wrath of God.  However, God made a choice.  A choice that He would forgive even through in order to do that He would have to send His only begotten Son to die a horrible death on our behalf - the Just for the unjust.

God never has to choose to forgive again.  The choice was made in eternity past and brought into application on the Cross of Christ.  The work is finished.  Forgiveness is available.  Every sin we ever commit - past, present and future - is already forgiven.  All we have to do is apply the forgiveness to our lives first by accepting Jesus as Lord and Saviour and then by faith coming before Him asking for forgiveness to be applied in individual cases as we walk through life.  We never have to be afraid that God is going to say, “No, its too much.  You come too often.  You’ve crossed the line this time.”  Total forgiveness for our total life has already been paid for.  To live in guilt after we have repented and asked for forgiveness is to doubt and devalue the work of Christ on the Cross.

So asking the Father to forgive our debts/sin is not asking for something that we are in doubt of.  It is not like asking the bank for a loan and you are not sure if you are going to get it or not.  It is more like a child asking his father for his promised allowance - He knows he is going to get it because it is what his father has promised.  We approach our Father with confidence, accepting responsibility, repenting of our wrong and accepting His loving forgiveness.

There is; however, another part to the story…

For I am convinced that neither death nor life, neither angels nor demons, neither the present nor the future, nor any powers, neither height nor depth, nor anything else in all creation, will be able to separate us from the love of God that is in Christ Jesus our Lord.  Rom. 8:38-39, NIV

God does not live in the past.  When we come to Him, repent and ask for forgiveness, our past is wiped clear.  Our very history is rewritten in the blood of Christ.  God is moving forward.

When we refuse to forgive others, we chain ourselves to the past and in so doing separate ourselves from God.  It is true that people hurt us and abuse us [and, if we are honest, we have hurt others].  Sometimes those hurts are so deep that forgiveness seems impossible.  Corrie ten Boom faced this after World War II when she was faced with a former concentration camp guard - a brutal guard in the camp where she had been held and her loved sister had died - who had since converted.  The pain ran deep, but with the strength of Jesus she was able to walk in forgiveness.  Sometimes the pain is so deep that we need the strength of Jesus to forgive - but, as Christians, it is always there for us if we choose to access it.

Also, we need to keep in mind that the pain others have caused us - no matter how deep - is only a small picture of the pain we have caused God and yet He has freely forgiven us.  To withhold forgiveness from others is to despise the forgiveness we have been given.

We do need to clarify: to forgive someone does not mean that we are saying that the offence was unimportant or that we become gullible in the future.  To forgive them is to release them from the debt they owe us, it is to trust them into the hands of God for His judgment.  This does not mean, in the case of criminal action, that we do not pursue the justice that is available.  It does mean that we have a correct attitude - not one of revenge and retaliation - but one that ultimately looks for the restoration of the offender.

What if the person does not seek or want our forgiveness?  We forgive anyway.  We cannot allow ourselves to be locked into the past with bitterness and anger away from the presence of God.  It becomes a dark dungeon of our own making.  We must let the past go and enjoy the sunlight of the Love of God in the present and on into the future.

But the path of the just is as the shining light, that shineth more and more unto the perfect day. Pr. 4:18