Heart Of A Servant

Rebekah had the heart of a servant.  As a young lady in her late teens or early twenties she probably had many chores and duties.  The one that made her famous was going to a spring outside of town to bring back water for the family.  It was during one of these trips that her heart of a servant shone out.

A weary traveller asked her for a drink of water.  Any hospitable person would have complied.  In fact, it would have been a grave and shameful neglect of duty not to.  However, Rebekah did not stop there.  What she did next revealed the true heart of a servant.  She offered to draw water for his ten thirsty camels until they were satisfied.  I don’t know how far the camel tough was from the spring, but she ran back and forth until the job was done.  She did this freely without thought of the time and effort it would cost it.

In today’s western society often people demand to be served and look down on those who serve as inferior.  They may not say so in exact words, but actions, abusive words and lack of courtesy and gratitude reveal who is really important in their minds.  And as Christians we can get caught into this attitude in our jobs and lives in general demanding perfect service from others while serving others only out of duty or to earn a wage.  Yet Christ, the King of kings, came to earth as a Servant and to serve.

Christ's Heart Of A Servant 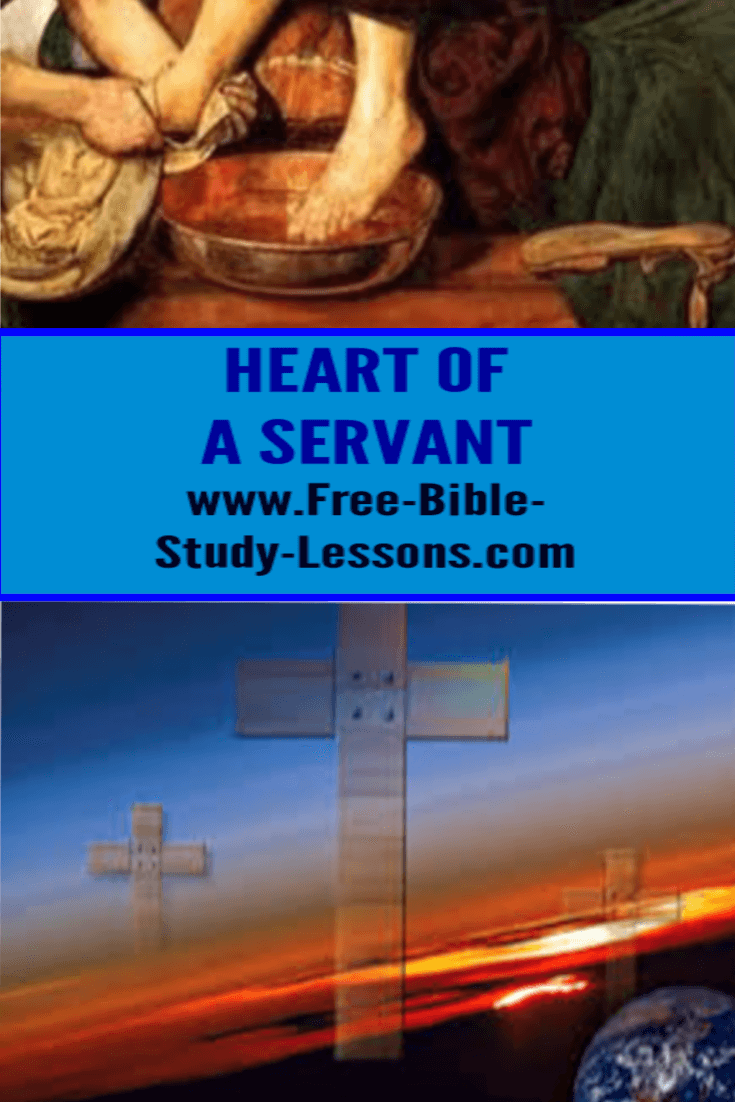 For even the Son of Man did not come to be served, but to serve, and to give his life as a ransom for many.” Mark 10:45, NIV

We recognize that Jesus did not come to earth to gain converts, but disciples.  The highest goal of a true disciple is to be like the Master.  Jesus could have stayed in Heaven and been served joyfully and perfectly by the angels.  He would have risked nothing and suffered nothing.  But it was His choice to save His human creation by embracing the unselfish heart of a servant, laying aside all His power, riches and glory to take the form of a helpless baby.  As part of His servanthood, He chose to be born to poor parents of a despised ethnic origin in a country ruled by a vicious foreign power and full of violence and injustice.  Nothing about His life on earth was pampered or self-centred.  And His death…tortured with the peak of physical, mental and spiritual pain…

“There’s no particular virtue in accepting punishment that you well deserve. But if you’re treated badly for good behaviour and continue in spite of it to be a good servant, that is what counts with God.

“This is the kind of life you’ve been invited into, the kind of life Christ lived. He suffered everything that came his way so you would know that it could be done, and also know how to do it, step-by-step.

“He never did one thing wrong,

Not once said anything amiss.

“They called him every name in the book and he said nothing back. He suffered in silence, content to let God set things right. He used his servant body to carry our sins to the Cross so we could be rid of sin, free to live the right way. His wounds became your healing. You were lost sheep with no idea who you were or where you were going. Now you’re named and kept for good by the Shepherd of your souls.”  1 Peter 2:20-25, The Message

Genuinely displaying the heart of a servant is one of the great keys of life whether in business, in the home, in government or in any other area.  It is one of the principles that God has built into His universe.  Those who serve will eventually rule.  The businesses that serve consumers the best are the ones that tend to thrive.  The husbands and wives who serve each other the best are normally the ones with healthy, loving marriages.  And so on…

We see this illustrated in Zechariah’s vision:

Then I looked up, and there before me were four horns.  I asked the angel who was speaking to me, “What are these?”

He answered me, “These are the horns that scattered Judah, Israel and Jerusalem.”

Then the Lord showed me four craftsmen.  I asked, “What are these coming to do?”

He answered, “These are the horns that scattered Judah so that no one could raise their head, but the craftsmen have come to terrify them and throw down these horns of the nations who lifted up their horns against the land of Judah to scatter its people.” Zec. 1:18-21, NIV

In Scripture horns often represent power especially governmental power.  Here we see that powerful people had come in to destroy [John 10:10].  They caused ruin and pain.  Like what happens in many countries today with evil governments, high crime rates, unjust taxation, corrupt courts, etc.  Or where the power of selfish ambition, alcohol, drugs, or sex have come in to destroy families or businesses.  Powerful forces are at work wreaking destruction and pain in nations and individual lives.  What was the solution?  Was it to fight power with power?

No, the Lord called for the craftsmen, the builder of lives, the ones who served.  In the long run…often further than we can see…God will see that service defeats power.  Like the spider whose web is constantly wreaked but continues patiently building and rebuilding, so we keep building.  When evil people sweep in and destroy our work, we build again…and we keep on building and rebuilding.  We will outlast our enemies.

Rebecca began by serving the camels and ended up by riding on them to a new and exciting life.  So as we serve in our problems, challenges and oppositions we end up ruling over them.

Obey them not only to win their favour when their eye is on you, but as slaves of Christ, doing the will of God from your heart.  Serve wholeheartedly, as if you were serving the Lord, not people, because you know that the Lord will reward each one for whatever good they do, whether they are slave or free.  Eph. 6:6-8

Does that mean that everyone with the heart of a servant prospers in this life?  Unfortunately not.  In a world contaminated with sin, that which is right is not always rewarded.  However, for the Christian, the practice of following Christ’s servant heart here will be abundantly rewarded in the next life even if it seems unnoticed or unappreciated here.  A true servant’s heart, like Rebekah’s, will be rewarded often in life but certainly, for the Christian, in the next and final stage of life.