A funeral service is being held in a synagogue for a woman who has just passed away.

At the end of the service, the pallbearers are carrying the casket out when they accidentally bump into a wall jarring the casket.

They hear a faint moan.

They open the casket and find that the woman is actually alive.

She lives for 10 more years and then dies.

A ceremony is again held at the same synagogue and at the end of the service the pallbearers are again carrying out the casket.

As they are walking, the husband cries out, "Watch out for the wall!"

There were five houses of religion in a small town; Presbyterian, Baptist, Methodist, Catholic and Jewish. Each had a problem with squirrels. The Presbyterians, after much prayer and consideration, determined the squirrels were there by God's will, so they shouldn't be interfered with. The Baptists tried to drown them in the baptismal tank, but the squirrels escaped and there were twice as many the next week. The Methodists humanely trapped the squirrels and set them free a few miles outside of town. Three days later, the squirrels were back. The Catholics came up with the second best and most effective solution. They baptized the squirrels and registered them as members of the church. Now they only see them on Christmas, Ash Wednesday, Palm Sunday and Easter. However, the very best solution came from the Jews. They took one of the male squirrels inside the temple and had a short service with him call "circumcision." They've never seen a squirrel around since. 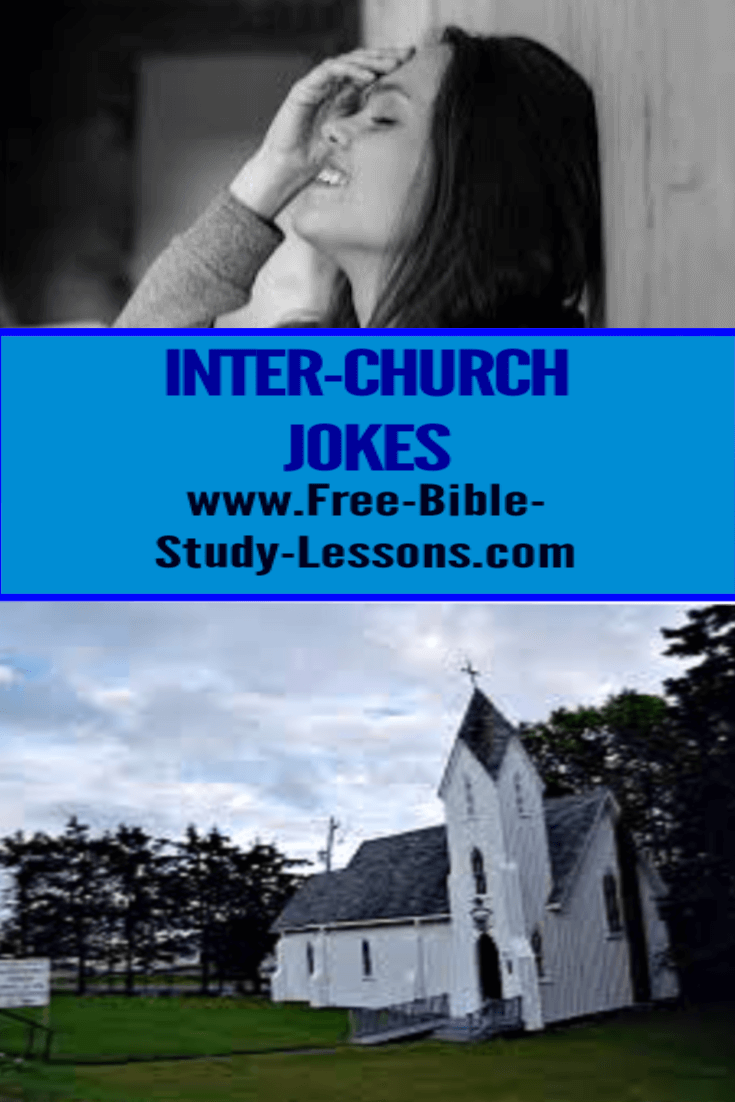 What do you call three Mennonite men in a blizzard?

Charismatic: Only 1 - Hands are already in the air.

Pentecostal: 10 - One to change the bulb, and nine to pray against the spirit of darkness.

Presbyterians: None - Lights will go on and off at predestined times.

Roman Catholic: None - Candles only.

Baptists: At least 15 - One to change the light bulb, and three committees to approve the change and decide who brings the potato salad and fried chicken.

Episcopalians: 3 - One to call the electrician, one to mix the drinks and one to talk about how much better the old one was.

Mormons: 5 - One man to change the bulb, and four wives to tell him how to do it.

Unitarians: We choose not to make a statement either in favor of or against the need for a light bulb. However, if in your own journey you have found that light bulbs work for you, you are invited to write a poem or compose a modern dance about your light bulb for the next Sunday service, in which we will explore a number of light bulb traditions, including incandescent, fluorescent, 3-way, long-life and tinted, all of which are equally valid paths to luminescence.

Methodists: Undetermined - Whether your light is bright, dull, or completely out, you are loved. You can be a light bulb, turnip bulb, or tulip bulb. Bring a bulb of your choice to the Sunday lighting service and a covered dish to pass.

Evolutionists: 1 - One to screw an empty shampoo bottle into the socket and then wait for it to evolve.

A small town man was worried about driving across a large city so he called the local police and asked when was the safest time to cross the city would be.

After thinking for a moment the police sgt. replied,"About ten o'clock Sunday morning. The Catholics are at Mass, the Protestants are at church, the Jews are on the golf course, and the atheists are shopping."

The man took the advice, but was hit be a Seventh Day Adventist late for work.

Priest: Rabbi, when are you going to break down and eat ham?
Rabbi: At your wedding, Father.

On one corner of a very small town were three churches, all of different denominations. One Sunday morning a passerby heard the first church singing, "Will There Be In Stars In My Crown?" The next church was singing, "No, Not One." and the third church was singing, "Oh, That Will Be Glory For Me."