Jochebed was able to use her amazing creativity and courage to solve an impossible problem.  She is only mentioned twice by name in Scripture, but she is the mother of Miriam, Aaron and Moses.  She and her husband, Amram lived around 1571BC to 1613BC or 2,433 years after Creation.

What Was Jochebed’s Unsolvable Problem?

Jochebed and her family were Israelite slaves in Egypt.  Sometime after the birth of Aaron the Pharaoh ordered that all baby boys must be killed as soon as they were born.  [The opposite of the situation today where being a baby girl - unborn or born - is the one in most danger of being murdered.]  According to the historian Josephus, the command also stated that if the parents tried to hide the baby boy the entire family would be killed.  This would increase the danger as family members afraid of being caught and killed could turn informant.  Each family who had a baby boy was placed in the horrendous position of having to choose the safety of the many over the life of the one or risk the lives of the many in an attempt to save the one. 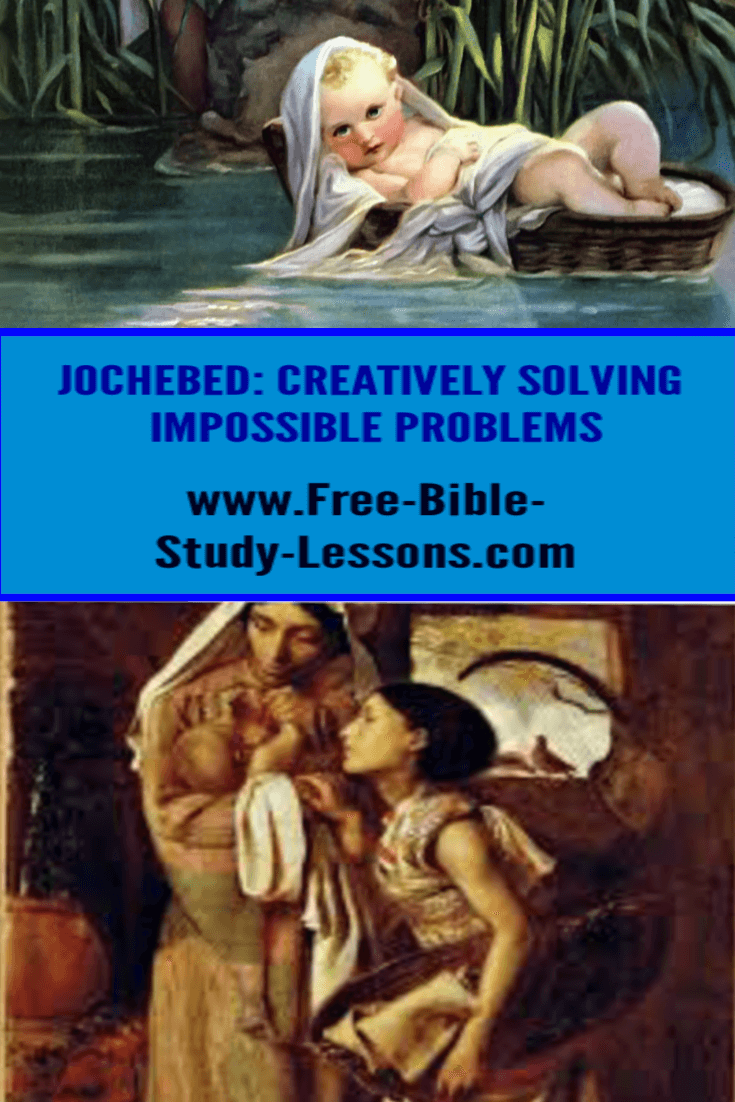 Imagine the fear when Jochebed became pregnant under these tyrannical conditions.  Would her baby be a boy or a girl?  I am sure she and Amram discussed many times what they were going to do if they had a male child.  Finally the time came.  Josephus tells us that God gave her an easy delivery so there was no unwanted attention drawn from those outside the home.  When their baby boy came, their hearts had already decided to obey God rather than Pharaoh.

Not only did Jochebed and her husband have the love and pride that all normal parents feel at the time which leads them to believe that their’s is the most beautiful baby in the world, but also there was some different about Moses.  Both Exodus 2:2 and Hebrew 11:23 mention that they saw something special about Moses, but it is vague as to what exactly is meant.  They knew God had a special plan for their baby and keeping him safe was not just about their family.  It was much bigger than that.  The destiny of a nation hung on their actions.  They were able to keep Moses quiet for three months but then babies will be babies and discovery was inevitable unless they did something.

The Creativity Of Jochebed

Now a man of the tribe of Levi married a Levite woman,  and she became pregnant and gave birth to a son. When she saw that he was a fine child, she hid him for three months.  But when she could hide him no longer, she got a papyrus basket for him and coated it with tar and pitch. Then she placed the child in it and put it among the reeds along the bank of the Nile.  His sister stood at a distance to see what would happen to him.

Then Pharaoh’s daughter went down to the Nile to bathe, and her attendants were walking along the riverbank. She saw the basket among the reeds and sent her female slave to get it.  She opened it and saw the baby. He was crying, and she felt sorry for him. “This is one of the Hebrew babies,” she said.

Then his sister asked Pharaoh’s daughter, “Shall I go and get one of the Hebrew women to nurse the baby for you?”

“Yes, go,” she answered. So the girl went and got the baby’s mother.  Pharaoh’s daughter said to her, “Take this baby and nurse him for me, and I will pay you.” So the woman took the baby and nursed him.  When the child grew older, she took him to Pharaoh’s daughter and he became her son. She named him Moses, saying, “I drew him out of the water.” Ex. 2:2-10, NIV

Many people faced with difficult or impossible situations give up and fall into depression.  They lose hope.  And that is not a position that will generate creative ideas.  In order to find answers and solutions a person must first have faith that an answer exists.  God is looking for men and women who will stand up when all seems lost and keep fighting on in faith until death or victory.  I wonder how much pain and suffering there is in this world just because good people gave up too soon?

For Jochebed and Amram failure was not an option.  God had given them this special baby; therefore, there had to be a solution.  How did they come up with this creative solution?

I have an idea [and if you disagree with me that’s fine as Scripture doesn’t actually say].  The word “ark” is used to refer to only two things in Scripture: Noah’s Ark and Moses’ basket.  I know the Bible talks about the Ark of the Covenant, but that is a different word in Hebrew.  I suspect that as Jochebed meditated on the Word of God and a solution to her problem God directed her thinking to Noah’s Ark.  It had saved eight people in a world destined to destruction.  Would something similar work to save her little boy?  The more she thought about it, the more it seemed like a likely solution.

Still she would have to use her creativity to work out the problems.  Once she set her mind to it, she went to work.  The basket would have to float and be waterproof.  The Egyptians made boats out of papyrus, why wouldn’t that work for her?  Covering it with tar and pitch would made it waterproof.  But where would the little ark with its precious cargo go?  It would not do for it float to the ocean or get caught somewhere along the way.  Moses would starve to death then.  Not a fate she wanted for her child!  Also, the Nile was full of crocodiles.  She didn’t want Moses to become lunch for one of them.  What to do?

As she prayed and thought about it she realized that there was one place on the Nile near to them that the crocks did not come.  It was also the place where Pharaoh’s daughter would go to bathe.  It is believed that Pharaoh’s daughter was childless and, since the Egyptians revered the Nile as a god, her bathing may have had a religious significance.  In any case, Joshebed realized that it would solve both the problems of the crocodiles and having someone not Hebrew find the child.  Of course, it was still a risk.  The princess might not see the basket as it floated by.  She might not care or she might be repulsed by a crying Hebrew baby.  She would know that this was an attempt by a desperate Hebrew mother to avoid her father’s decree.  The great unknown:  What would she do?

This is where faith and trust came in.  Jochebed and Amram used their creativity in line with Scripture to come up with the best solution possible.  They worked at carrying out their plan at the risk of their lives and with no guarantee of success.  It came down to faith in God.  Either God would give success or they would fail and a precious life would be lost.

When we face life’s challenges we, too, are confronted with choices.  Will we give in?  Will we become discouraged and bitter?  Are we going to be creative workers or chronic complainers?  Are we going to follow Jochebed’s courageous example?

Of course, we know what happened.  Pharoah’s daughter fell in love with Moses - she is the one who named him.  Not only that, but she unknowingly paid Moses’ mother to look after him and train him for three years!  And Jochebed used those three years well because by the time Moses went to live with the princess he knew who he was and what he had to do.

By faith Moses, when he had grown up, refused to be known as the son of Pharaoh’s daughter. He chose to be mistreated along with the people of God rather than to enjoy the fleeting pleasures of sin. He regarded disgrace for the sake of Christ as of greater value than the treasures of Egypt, because he was looking ahead to his reward.  By faith he left Egypt, not fearing the king’s anger; he persevered because he saw him who is invisible. Heb. 11:24-27, NIV

What about us?  We have no guarantee of success, no guarantee of a happy ending on earth [although the promise of reward after death].  But we do have one example of creative thinking and courageous risk taking.  We will never know how many people will suffer if we refuse to stand for God.  We don’t know whose destinies may be changed or exactly what hangs in the balance of our decision.  We do know the action we should take…will we follow Jochebed and Amam or not?  Will our name be in the Role Of Faith being written in Heaven of which Hebrews chapter eleven is but a small sample?

Sometimes we are tempted to think we are small and insignificant so what we do cannot really matter.  Jochebed was just a slave’s wife in a foreign country under oppressive rule.  The Bible [and history] is full of “little” people who had a big impact…bigger than anything the world saw coming.