Is Spanking Children
Something Jesus Would Do?

Does the title with Jesus and spanking children sound shocking? We do not usually think of Jesus in such terms. We have been trained, often, by liberals and humanists to think of a feminized Jesus, meek and mild. One Who would never raise His voice or His hand. It is interesting to note that, although Jesus was - for most of His adult life - a carpenter making many things with His hands, the only thing that Scripture directly records that Jesus made with His hands was a whip with which He "spanked" wayward adults. Jesus actually did this twice, once at the beginning of His ministry [John 2] and once at the end of His ministry [Matt. 21].

"So he made a whip out of cords, and drove all from the temple courts, both sheep and cattle; he scattered the coins of the money changers and overturned their tables." John 2:15

"A number of slaps on the buttocks delivered in rapid succession..." The Free Dictionary

What is the purpose of spanking children? Done properly, a spanking is a loving act to train a child for his or her own good. It is the responsibility of parents to train their children in the correct way to live. A Godly parent's desire is for their children to become responsible adults who love God, have good families of their own, serve people, and are productive in this present world. Spanking children is one of many tools used in achieving these goals. It is certainly not the only tool, but it can be effective in the right situation and if administrated correctly. 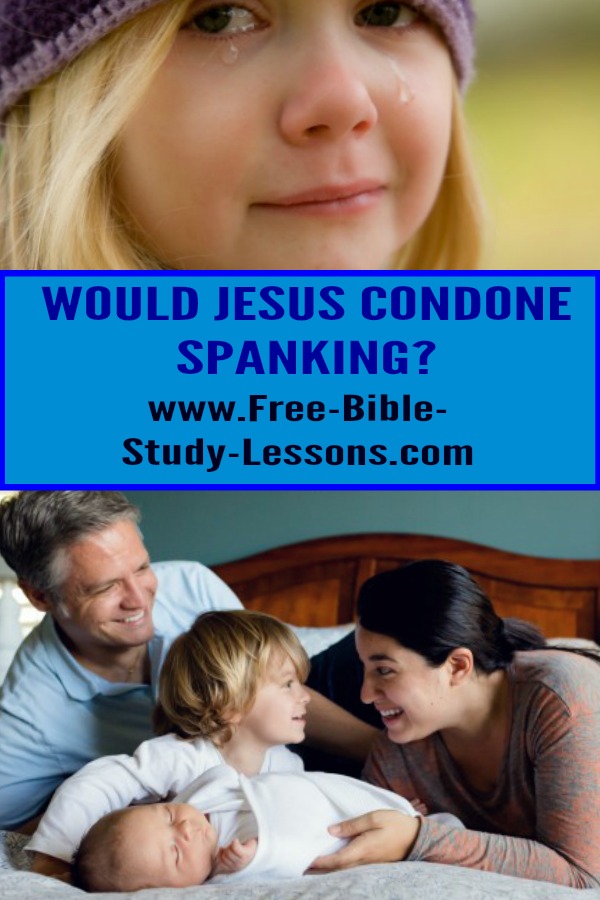 Spanking children by "slapping" the buttocks with an open hand or some other object is intended to cause a stinging pain without causing any bodily harm. It is to send a strong message to the child's brain that a certain activity is harmful and would best be avoided in the future. It is to help them to make better choices in the future. Done correctly it does not "teach violence" [we have bad TV and music for that], but instead teaches that actions have consequences and if those actions are sinful then the consequences are painful.

The humanists, who object to spanking children, have a wrong presupposition. They assume a child is born innocent and is naturally good. At worst, they feel, the child is a "blank slate" which can be written on for good or bad. This is part of their religious commitment to the goodness of human nature.

The Bible is plain:

"Surely I was sinful at birth, sinful from the time my mother conceived me." Ps. 51:5, NIV

"Foolishness is bound in the heart of a child; but the rod of correction shall drive it far from him." Pr. 22:15, KJV

"Young people are prone to foolishness and fads; the cure comes through tough-minded discipline." Pr. 22:15, The Message

We are born with a sin nature, everyone of us. Our natural tendency is to do wrong. Adam, Eve, and Jesus are the only three people in all time who have not had a sin nature to pull them in the wrong direction. While Jesus Christ is the only permanent answer to the sin problem, children have to be taught to control their sinful desires.

Self-control is a basic life skill. If people do not learn it when they are young, the lack of it will haunt them for the rest of their lives. They may wonder why they can't make relationships work, why it is hard to hold a job, etc. Often it can be traced back to lack of basic self-control skills which should have been taught to them by loving parents when they were children. Now life is more difficult and lessons are harder to learn.

"Don't be afraid to correct your young ones; a spanking won't kill them. A good spanking, in fact, might save them from something worse than death." Pr. 23:13-14, The Message

When should parental spanking take place? As said above, spanking children is only one tool. The goal is to train a child in self-control and to be able to make good, healthy [physically, mentally, and spiritually] choices. Parents must choose which tool to use to correct the offensive behavior. Parents have to be careful not to expect a child to do something which is too hard for their age/maturity level. Actions which are the result of immaturity, childish silliness, or forgetfulness can be dwelt with in a less dramatic way. However, actions which come from rebellion, defiance, or direct disobedience must be dwelt with swiftly and completely regardless of the age. Different ages and different personalities will require different tools, but the challenge cannot be left unanswered or the child learns he is the center of the universe and other people are merely toys for him to use or abuse as he sees fit. Spanking children is often the best response to direct challenges from the child, but it is not the only possible response.

It is vital that parents do not spank out of their own anger, frustration, or embarrassment. The focus is on the child. It is to train the child. If the parent is spanking - or using any discipline tool, for that matter - because of their own feelings then they are in the wrong and are not trying to train the child but only to vindicate themselves. They need to learn self-control before administering correction.

Both parents and children should be clear on the offense or the type of offenses which would warrant a spanking. Rules and expectations need to be clearly laid out. The younger the child, the more obedience is required without explanation. The older the child, the more reason can be given so they understand why a certain type of behavior is wrong. The parent should also decide in advance what the maximum number of "slaps" should be and never exceed that amount. Three is often considered a good number to send a message to the brain. Note: some parents give a little tap which is hardly felt, if felt at all, and call it a spanking. A real spanking is something a child does not want to have repeated!

Teenage spanking is something should never occur. It will tend to foster feelings of resentment and anger even if the spanking is totally deserved. If a child has not learned basic self-control by the time they are teenagers, then other tools should be used and spanking "retired." In most cases, if spanking children has been used correctly in the younger years, it will be a rare occurrence as the child approaches pre-teen years.

If the child is school age, the parent needs to be especially sensitive to spanking a child of the opposite sex. If possible, the parent of the same sex should administer the spanking. The purpose is to train the child, not to embarrass or humiliate them.

Spanking children by their parents has come under attack in the humanist-centered countries of our world. In Canada, it is illegal to spank a child under two or over twelve, but there are always voices who want to eliminate the parental spanking altogether. There are several possible reasons for this but two of them are:

1. A genuine attempt to stop child abuse. Child abuse is a terrible thing and deserves the full punishment of law, but proper children spanking, by loving parents, is not child abuse. It is like trying to ban all cars because some people drink and drive. You deal with the offenders, not the responsible people.

2. The humanist wants, at all cost, to avoid responsibility to God. They want to be free to be irresponsible. Spanking is a reminder that there is a right and a wrong. God does exist and they, too, will be held responsible for their actions. Eliminating spanking children removes one more reminder that their fantasy world of independence from God is wrong.

So, is spanking children something Jesus would do? Jesus is the ultimate in Love. If being an earthly parent was something that had been in the Father's plan for Jesus, then spanking His children would have been something He would have done. He would have loved them too much to allow them to grow up without learning basic self-control in the ways of God.

And how does the scientific research relate to spanking?  See this article:  Is It Harmful To Smack Your Child?