Hannah was in pain.  She had a good home.  She had a loving husband.  But her heart’s desire was for a son and yet she was unable to have any children.  “Her rival wife taunted her cruelly, rubbing it in and never letting her forget that God had not given her children. This went on year after year. Every time she went to the sanctuary of God she could expect to be taunted. Hannah was reduced to tears and had no appetite.” [The Message]  No one could help her, no one but God.

God had a special plan for Samuel.  He was to become a great judge, prophet and king maker.  His every word was to carry weight [1 Sam. 3:19].  Yet for this very special ministry he would need to be raised and trained in the house of God so that the very Word of God would form his life.  How was that to be?  Only as one Godly woman became so desperate that she would think of what no one had ever thought of before.  If God would give her a son, she would return him to God by allowing him to live in the tabernacle.  She would place her ultimate trust in Him.

And so Hannah made her vow.  If God gave her a son, he would belong to God.  God heard…and took her seriously.  In less than a year Hannah had her first born son.  What a joy!  All the love of her mother’s heart went out to her son.

Probably when Samuel was between the ages of two and four the time came when Hannah knew she had to keep her vow.  There is no evidence that she resented or regretted her decision as difficult as it must have been.  Her son, while away from her, would be living in the presence of God.  It was a privilege and an honour as well as being a sacrifice.  She would need to have the ultimate trust.  She would have to trust God to look after her boy.  As a mother she wanted to do that.  She wanted to care and look after him.  But she would have to take her hands off his young life and trust God to protect him and work His will in Samuel’s life.

As any parent can imagine, that would have been difficult enough, but there was Eli…

Eli was the chief priest.  He was the one in charge of the tabernacle.  He was the one who physically would be looking after Samuel.  Yes, he was a nice enough old man, but he had failed miserably with his own family.  His own sons were not only a disgrace to Eli’s family, they were a shame on God’s family.

The sons of Eli were wicked men. They did not recognize the Lord’s authority.  1 Sam. 2:12, NEB

The sons of Eli violated the sacrifices offered to the Lord, threatening violence if the worshippers objected.  They had sex with the women serving in the tabernacle.  They were totally without respect for God or the people they were supposed to be serving.

Eli knew this.  And although he warned them, he did not stop them.  In fact, Eli, as well has his family for generations to come was fast approaching the judgment of God.

And to this man Hannah was going to trust the care and training of her precious son? 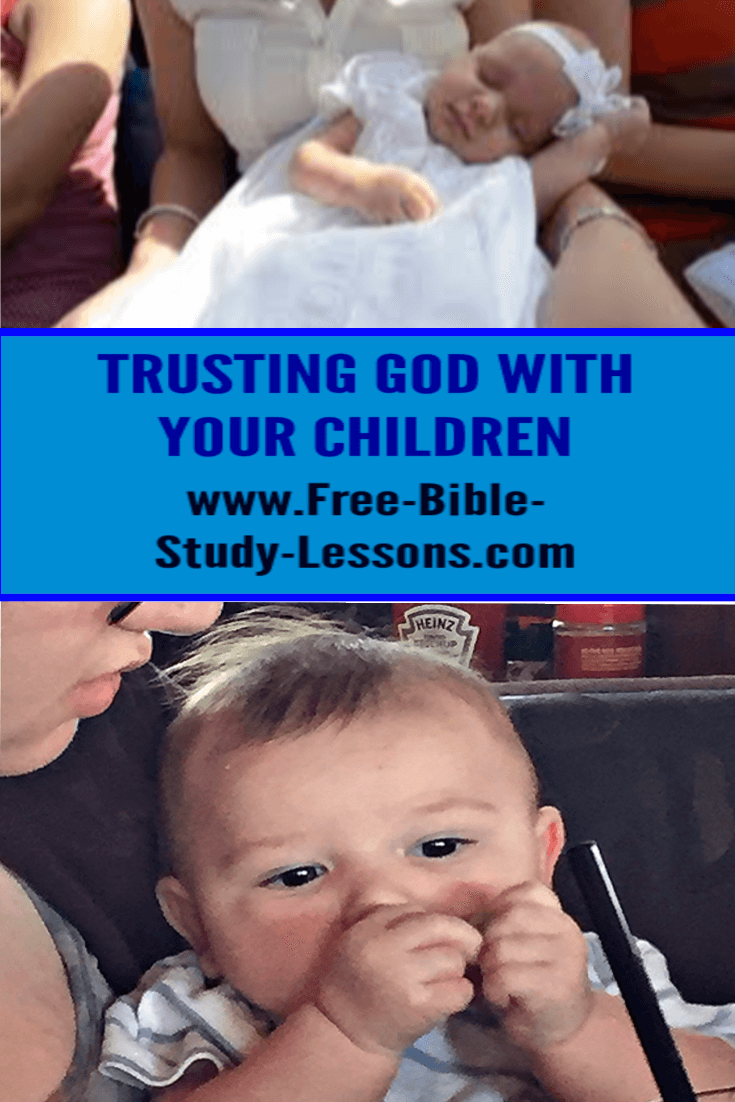 Obviously her trust was not in Eli, but in God.  It was the ultimate trust and test of faith to be able to look past the outward situation and trust God to protect and keep Samuel for His purposes.  Hannah serves as an example for all Godly parents.

This story is often read at Protestant Baby Dedications where parents give their child to God and promise to do their best to raise their child to love and serve God.  Many times the congregation also makes a pledge to assist them in their task.  It should be a solemn event not to be entered into lightly or out of tradition or family expectation.  The parents are, in fact, saying, “Jesus, we recognize that this child is Yours and we are loving and caring for him or her on Your behalf.  And we will answer to You for our actions which affect this child for better or worse.”  It is also a trust that Jesus will enable them, as parents, to met the challenges that arise and will be at work in the child’s life to bring him or her to a saving knowledge of Jesus Christ and fulfill the purpose for which they were born.

As many parents, especially mothers, can say through their tears, things do not always work out as expected.  Parents can do the best that they are able, and none of us are perfect, and yet the child can still reject the faith and walk away from what they have been taught.  In some cases, they may even reject their own parents in spite of the love given them.

And this is where Hannah’s level of trust again comes in.  We must trust  that God is still in control.  There are times, as difficult as it is, we have to “removed our hands” from an older teenager or adult child and allow them to go their own way and suffer the consequences of their bad choices.  Through persistent prayer we never give up on them no matter how far they may stray or how deeply they hurt us.  We trust that God is sovereign and Jesus will not lose a single one whom He has chosen.

And for those of us outside the situation who think we “know what went wrong” it is better to offer support and comfort to parents in anguish than theorize on what could have been done differently.  We are all imperfect.  And we all need to humbly and prayerfully move forward.  And if our own children never go into rebellion we need to be grateful for the grace of God and have compassionate on those who have a different experience.