Man Shall Not Live
On Bread Alone

“Then Jesus was led by the Spirit into the wilderness to be tempted by the devil.  After fasting forty days and forty nights, he was hungry.  The tempter came to him and said, “If you are the Son of God, tell these stones to become bread.”

Jesus answered, “It is written: ‘Man shall not live on bread alone, but on every word that comes from the mouth of God.’” Matt 4:1-4, NIV

“Jesus, full of the Holy Spirit, left the Jordan and was led by the Spirit into the wilderness, 2 where for forty days he was tempted[a] by the devil. He ate nothing during those days, and at the end of them he was hungry.

The devil said to him, “If you are the Son of God, tell this stone to become bread.”

Jesus was in the wilderness for forty day being tempted by the devil.  During that time, He ate nothing.  When the forty days were over He was hungry.  He wanted something to eat…who wouldn’t?

It was at this moment of perceived weakness, that satan slyly suggested that Jesus turn some stones into bread.  Why was this wrong?  Jesus was hungry - perfectly natural.  He had the ability to turn the stones into bread…later He would multiply fish and loaves.  There was nothing sinful about eating.  What was sinful about this first of three climatic temptations of Christ? 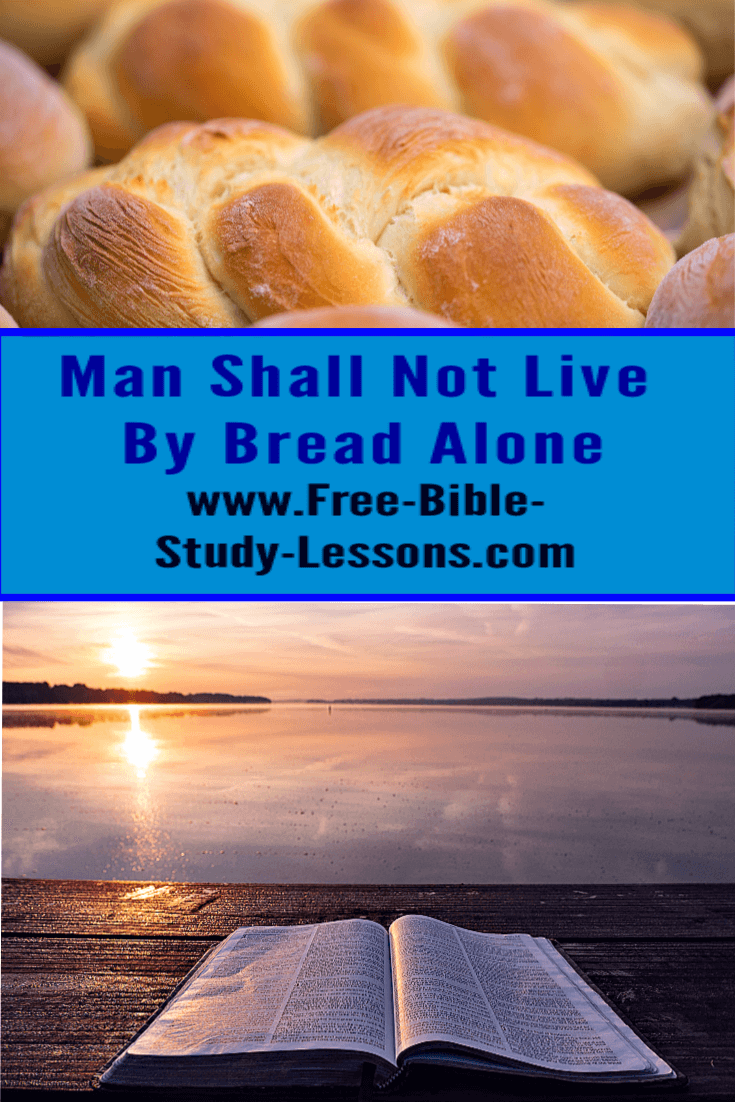 The first thing that made it wrong, is that it would have been giving obedience to satan.  The devil crept up, like he had with Eve, and made a seemingly innocent suggestion.

Satan does not have pure or innocent motives.  He is the master deceiver.  If he is commanding or suggesting something, it is because he has a game plan that will bring death and destruction.  Even if something is right or innocent in itself, when it comes from satan’s lips it is deadly.  Jesus was not even going to consider the slightest obedience to satan.  To do so would have given Him divided loyalties.

We should keep this principle in mind when we are tempted.  The fact that the enemy of our souls and of our God is suggesting something should be a red flag.  We should not even bother to try to reason out what might be wrong or justify it.  We may not be able to discern what is behind the suggestion.  It may seem to meet a need [Jesus was hungry!] or be innocent…but just obeying the devil is wrong in itself.

Satan always tries to implant doubt.  For 40 days he had tried unsuccessfully to implant doubt in Jesus’ mind about being the Son of God.  Now it is almost as if he comes up and says, “Ok Jesus.  You win.  Maybe I was wrong.  Maybe You really are the Son of God.  You’re hungry.  Turn some of these stones into bread.  Satisfy your hungry and remove my doubt at the same time.  I know the Son of God could do it.  Just show me.”

Jesus knew perfectly well that satan already knew He was the Son of God.  Such a display of power would prove nothing.  “Proving” something to satan would be pointless, but it would show a lack of confidence on His part…a need to prove Who He was for His Own reassurance.  In perfect faith Jesus had no doubt as to Who He was and; therefore, no reason to try and prove Who He was.  Later, He would not allow the demonic realm to testify to Who He was.  He would even try to prevent people from spreading the word. 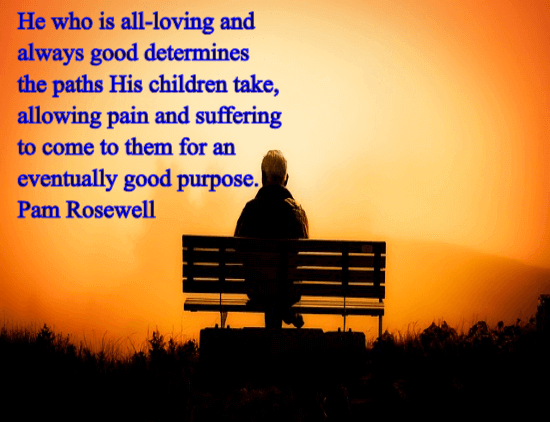 This temptation was to doubt God’s provision.  Jesus had been led by the Holy Spirit into the desert.  For 40 days he had done battle with satan without any physical nourishment.  Had the Father forgotten that He had physical needs?  Was He to defeat the devil only to die of starvation?

The physical body of Jesus screamed for food.  The devil suggested that the Father had neglected to provide for His needs.  If Jesus had turned the stones into bread, He would have been saying that He agreed that the Father had failed in this aspect so He needed to provide for Himself.  He would have no longer been acknowledging His total dependence on His Father.  It would have been an act of independence…an act of sin.

Do we fall into this temptation?  When we have lack - or perceived lack - do we blame God?  Or if we don’t blame God do we harbour thoughts that maybe He doesn’t know or maybe He doesn’t care or He has forgotten us?  Those are all tricks of the enemy to get us to take for ourselves things - even necessary things - that the Father is not ready to give us.  It is to doubt the goodness and character of our loving heavenly Father.  Much of the debt that western Christians have is because they have taken things for themselves that the Father had not provided for.  And often those things become a temptation to pull us away from Jesus.  At the very least, all the debt payments keep us enslaved in a way the Father never intended.

If we really believe that God is good, that He loves us and that He is our Father looking after us, then we will learn to be content in whatever circumstances we find ourselves.  Like Job, if we must face disaster, we will not accuse or blame God.  We will learn to accept all things as from His loving hand…even, sometimes, through our tears.

When we have needs - or perceived needs and even just desires - we can go to God in prayer and talk to Him about them.  We are to look to Him as our Source of provision.  We are not to take things into our own hands…in effect to become our own god looking to ourselves and our abilities as the source of our provision.  This is one reason for tithing…to show that we trust God will provide even when give away what we could have used for our own needs.

Man Shall Not Live
On Bread Alone

“Remember how the Lord your God led you all the way in the wilderness these forty years, to humble and test you in order to know what was in your heart, whether or not you would keep his commands.  He humbled you, causing you to hunger and then feeding you with manna, which neither you nor your ancestors had known, to teach you that man does not live on bread alone but on every word that comes from the mouth of the Lord.  Your clothes did not wear out and your feet did not swell during these forty years.  Know then in your heart that as a man disciplines his son, so the Lord your God disciplines you.” Deut. 8:2-5, NIV

How did Jesus meet this temptation?  How did He endure the rumblings in His stomach and extinguish the fiery darts of doubt that were hurled at His mind?

The Word of God.  He did not argue.  He did not try to defend the Father’s actions.  He simply quoted the Word of God.  The quote from Deut. 8:3 acknowledges that food is important to human life, but also that there are things more important.  What is seen is ultimately upheld by the lips of the unseen God.  Jesus refused to allow His focus to be diverted, even by His need, from the purpose and superiority of the Father in all things.

In Deut. 8: 2-5 Moses explains to the Israelites why they had to endure 40 years in the wilderness.  God was trying to teach them that He was their source of supply that “man shall not live on bread alone, but on every word that comes from the mouth of God.”  They felt hunger and He provided manna.  Their clothes and shoes were supernaturally kept from wearing out [sorry ladies no new wardrobes].  It was training to get their eyes off of the natural and onto God.

Jesus proved in 40 days and in conquering this temptation that He relied on the Father alone.  Whatever the Father gave Him was good.  Whatever the Father withheld from Him was for His own good.  It was total trust in the Father inspite of what His body and the thoughts assailing His mind told Him.  Jesus passed the test.  He would need this total confidence in His 3 1/2 years of ministry.  And most importantly, He would need total confidence in the Father’s plan, will and care as He faced Gethsemane and Calvary.  This temptation was like the “lion” and the “bear” before facing Goliath.

Likewise, when we face difficult circumstances we need to have confidence in the Word of God.  God is Good.  God loves us.  God has a purpose and a plan.  We need to yield to that plan.  To learn the lessons He has for us so we, too, will be ready for whatever the future holds.