Divorce:
God's Protection For The Innocent

Divorce is controversial among Christians. Some churches do not allow it except for adultery [and then only reluctantly]. They keep people who have experienced marriage failure out of leadership and often treat them as second class citizens. Many times they refuse to allow a re-marriage forcing the person into a single life. They are hard and legalistic.

According to Bradford Wilcox, a leading sociologist at the University of Virginia and Director of the National Marriage Project, conservative Protestants are 35% less likely to divorce than Americans who have no religious connection and conservative Catholics are 31% less likely. However, people who claim to be Christians but rarely attend church are 20% more likely to divorce than secular Americans. Quoted from LifeSiteNews.

Other churches go to the opposite extreme. They allow divorce without a second thought. Influenced by humanism, they lower the standards in trying to seek the benefit of the person without regard to Biblical ethics. They are compromising and liberal.

What does the Bible teach? This is one topic where people tend to look at one verse and build their entire belief on that one verse [We will look at that verse a little further down]. As with anything, we have to view the total teaching of the Bible on any subject. Every verse is important in giving a complete picture of a subject. This subject of is no different.

What was God's original design?

And Adam said, This is now bone of my bones, and flesh of my flesh: she shall be called Woman, because she was taken out of Man. Therefore shall a man leave his father and his mother, and shall cleave unto his wife: and they shall be one flesh. Gen. 2:23-24

But from the beginning of the creation God made them male and female. For this cause shall a man leave his father and mother, and cleave to his wife; And they twain shall be one flesh: so then they are no more twain, but one flesh. What therefore God hath joined together, let not man put asunder. Mark 10:6-9

God's design was for one man and one woman to be together for their entire life. That is the way things are intended to operate. Problems and difficulties are to be worked out and the partners grow closer to God and to each other through the challenges of life. God has a purpose for each family and each couple. Ending the marriage when things get difficult is not to be considered as an option.

So what happened? Why did divorce come in? Under what situations is it legitimate and when is it selfish and sinful?

And they said, Moses suffered to write a bill of divorcement, and to put her away. And Jesus answered and said unto them, For the hardness of your heart he wrote you this precept. Mark 10:4-5

Jesus tells us why divorce came in - sin. It is because sin came in and hardened hearts that marriage partners seek to end their marriages. Essentially, sin kills. All marriage termination happens because of sin which brings death. Actually, the most common form of divorce is physical death [Rom. 7:2-3]. When one partner dies, the surviving partner is divorced from them and free to remarry. We don't often think of that as a divorce, but it is one type.

Death Of A Marriage 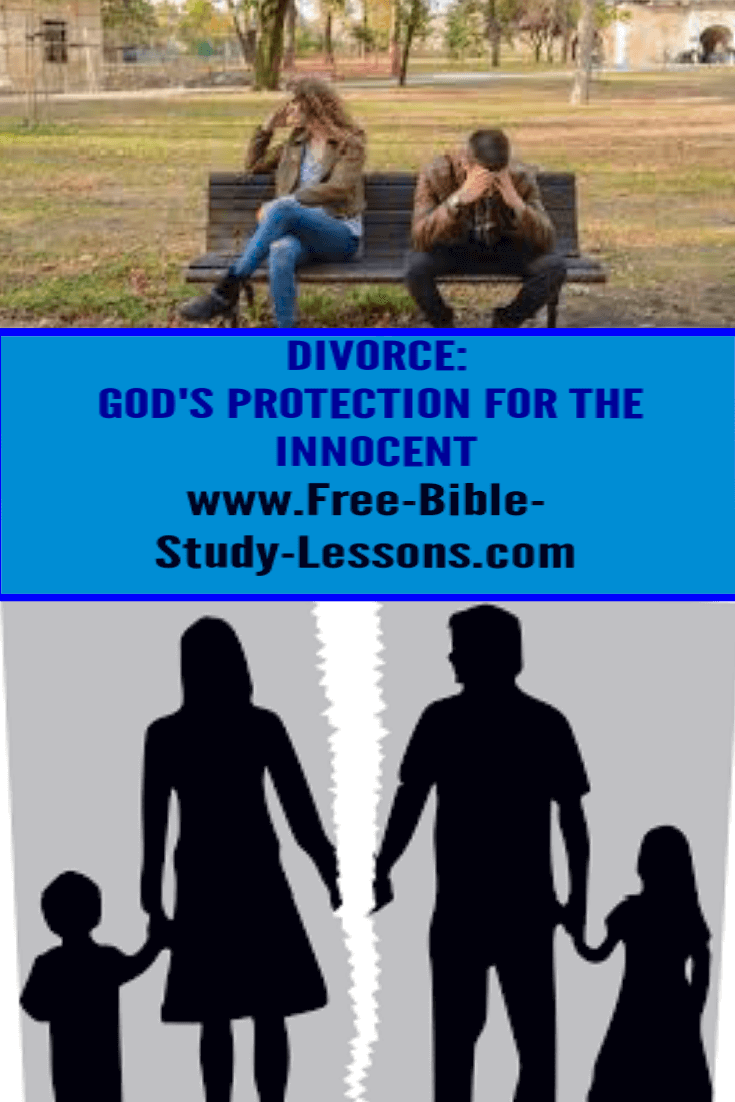 However, it is possible for a marriage to be killed while both partners are alive. Marriage is a covenant. Covenants can be broken, i.e. killed. This is one reason why ending a marriage has a tremendous emotional impact on all involved - a death has occurred. So what kills a marriage?

When a man hath taken a wife, and married her, and it come to pass that she find no favour in his eyes, because he hath found some uncleanness in her: then let him write her a bill of divorcement, and give it in her hand, and send her out of his house. Deut. 24:1

If he take him another wife; her food, her raiment, and her duty of marriage, shall he not diminish. And if he do not these three unto her, then shall she go out free without money. Ex. 21:10-11

The Exodus portion, while speaking specifically to a person who marries a second wife [which is not part of the original design], shows us what a wife has a legitimate right to expect from her husband. She has a right to food and clothes - i.e the basic necessities of life. She also has the right to the "duty of marriage." In other words, she has a right to a loving, caring, sexual relationship. Any man who can provide these things and does not has forfeited the privilege of having a wife. No woman is forced to be married to a lazy man who will not care for her to the best of his ability. [No woman has the right to demand luxuries which they cannot afford either.]

Since physical death ends a marriage, any offense that was a capital offense in the Old Testament is a legitimate cause for ending a marriage in societies which, in rebellion to God, do not enforce the death penalty for those offences. No person is forced to be married to a criminal or abuser.

When Is Divorce An Option?

In order for the terminating of a marriage to be Biblically legitimate:

1. A divorceable offence must have been committed. [Note: Loss of the emotion of love or "incompatibility" are not acceptable reasons. There must be an actual, provable offense.]

2. The offense must be able to be proved with the same type of evidence as required for a criminal case. [Divorce is a type of criminal case - one partner is being charged with murdering a marriage. They are presumed innocent until proven guilty.]

3. The accusing party must be innocent. If both have committed adultery, for example, then neither one can end the marriage on the basis of adultery for there is no innocent party. If after a person is cleansed and forgiven by the Blood of Christ and the other person continues to live in adultery, then there is an innocent party and ending the marriage becomes a possibility.

Ending a marriage is never required. There are people who have had legitimate reasons for ending their marriage, but have chosen instead to work at rebuilding the marriage. Some have seen a remarkable resurrection and gone on to a terrific marriage. A divorceable offense makes ending the marriage an option and no guilt is attached to the person who seeks a legitimate divorce. It is to protect an innocent person from a sinful situation. [It may surprise some to learn that God considers Himself to be divorced when He put away sinful Israel - Is. 50:1, Jer. 3:8]

Finally, let's look at the famous words of Jesus on this subject.

But I say unto you, That whosoever shall put away his wife, saving for the cause of fornication, causeth her to commit adultery: and whosoever shall marry her that is divorced committeth adultery. Matt. 5:32

And I say unto you, Whosoever shall put away his wife, except it be for fornication, and shall marry another, committeth adultery: and whoso marrieth her which is put away doth commit adultery. Matt. 19:9

This is where some jump up and say, "See! Adultery is the only reason for ending a marriage. Jesus said so."

To which I reply, "At least read the verse properly."

Yes, the word of Jesus is the final Word on any topic. Jesus did not give adultery as the reason for divorce. He used the word "fornication." If He had meant adultery, He would have said adultery. Fornication is a broader term. Certainly it emphasizes sexual sin, but it can also encompass a range of sin which separates from God. For example, God considered idolatry [2 Chr. 21:11] and forsaking Him for the world [ Is. 23:17, Ez. 16:29] to be fornication.

Jesus is the Messiah. As such He was a champion of the Law of God [Matt. 5:18-19]. IF Jesus at any time broke the Law, promoted breaking the Law, or set it aside, then He would have been in rebellion to the declared Word of God and could not have been our Sacrifice. Therefore, when Jesus used the word "fornication" as the reason for ending a marriage, He must have meant it to include the entire, balanced Old Testament teaching on divorce. Certainly He meant to speak against the misunderstanding and easy marriage termination of His day [and ours] but, on the other hand, He did not intent to limit the Law of God through Moses to simple adultery.

It is impossible in this short report to answer all the questions. We look at this subject in Biblical Law and the book below gives an excellent, Scriptural and well-balance look at the subject of divorce and remarriage.

Just some other quick notes:

1. Ending the marriage is not Biblically legitimate when both parties in a remarriage are involved in adultery.

3. Since terminating a marriage is a death, the offending party has no right to any rights, privileges, or assets from the marriage. In other words, the innocent party should get custody of the children and all the assets. In our secular courts this is often ignored. Therefore, there is nothing wrong with the innocent party seeking as much as the courts will allow. Important note: This must not be done in a spirit of anger, bitterness, resentment, etc.

4. This report should not be seen as recommending the termination of a marriage. Ending a marriage is never an easy answer and God is the God of Resurrection. That which is dead can live again. The purpose of this report is to show when it becomes a legitimate option to an innocent spouse. If the divorce option is taken - with Biblical reason - then no guilty or penalty is attached to the innocent party. As far as God is concerned the guilty party has died to the marriage and the innocent party is as free as if it had been a physical death. It is a tragedy that our courts [and often our churches] do not recognize and support this.