God's Will Be Done

When reading this, the first thing that strikes me in the statement “Your will be done” is that God’s will is not currently being done!  There would be no point in praying for God's will to be done if it was being fulfilled perfectly right now.  That means that the sickness, pain, crime, natural disasters, hate, envy and even injuring accidents, etc. are not the will of God.

Instinctively many of us know that a God of love would not take pleasure in the pain and suffering of His creation.  Yet we [and unbelievers, too!] often struggle with the concept of a loving God, Who is all powerful, all knowing, and sovereign, allowing such things to happen to us, our friends and in the world generally.  Are these contradictory, as atheists charge, or is there an explanation?

God would love to charge in and remove all the pain and suffering in the world [and sometimes He does in what we call miracles], but to do that would be to violate one of the most precious gifts He has given the human race: free will.  All the pain. suffering and even the rebellion of nature in disasters is a result of sin.  Adam deliberately chose to rebel against God and His order and allow sin into the world.  The rest of us, by actively perusing a course of sin and rebellion, add to and increase the effects of sin in our lives and in the world in general. 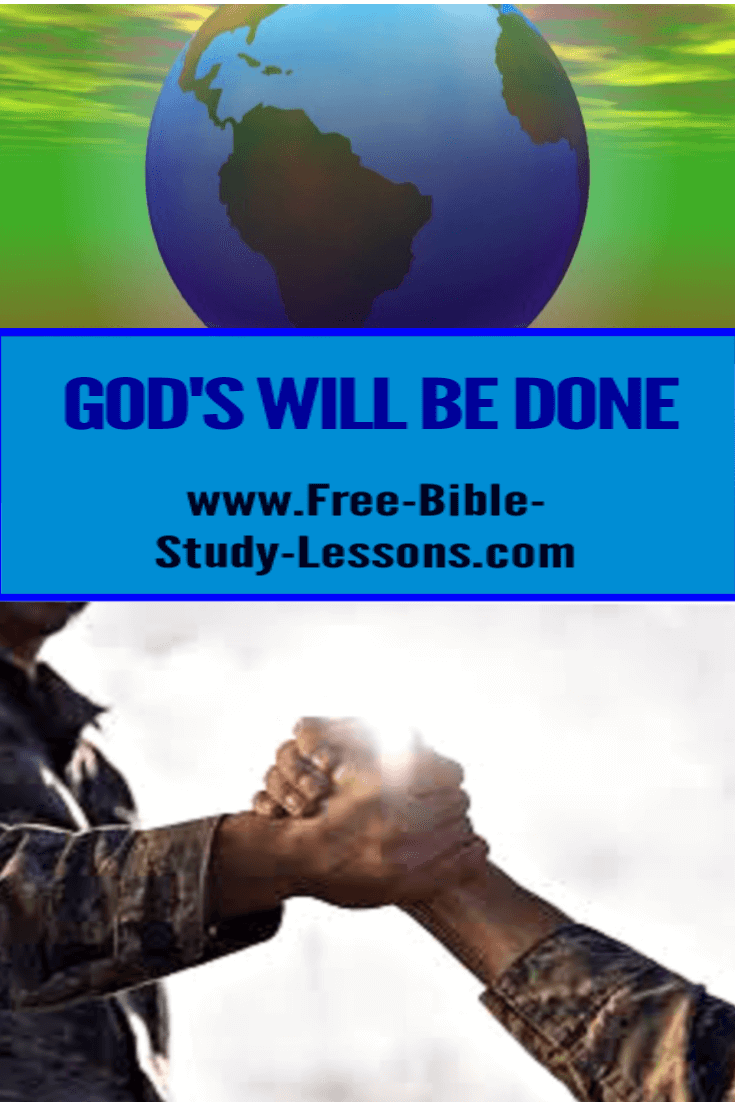 God designed a perfectly balanced and intricately connected world.  Everything is related one way or another even through we may not see the connection.  For example, we can commit the sin of worry and wonder why we have ulcers.  [Some researchers estimate that 70% - 80% of all sickness is caused by emotional or spiritual problems.]  We can commit sexual sin and wonder why marriage is breaking down in society, children are rebellious, or there is oppression in government.  Everything is connected and when we rebel against the way God designed the universe to operate by making bad choices, the consequences are far reaching even to the realm of nature.  [People worry about man-made global warming, but if globally people would reject man-made sinful choices the problem would be solved!  So evangelism is the solution not oppressive laws, fear-mongering, guilt manipulation and population control.]

When Is God's Will Being Done?

On a natural plane, the will of God is being done - by Christians and non-Christians - as they seek to help those in trouble and pain.  That is part of being made in the image of God - even in those who do not acknowledge God.  Modern Science was founded on the principles of God’s Word [i.e. that God created an orderly world that can be investigated and understood by man].  Many of the scientists at that time were dedicated Christians or, at least, believed in God.  So hospitals, orphanages, medicine, disaster relief, etc. are part of bringing the will of God to hurting people.  But, at best, they can only temporarily relieve some of the symptoms of a world at war with God.  Still, that is an important activity in the will of God.  Evolution, because of its false premises, actually hinders true scientific discovery and, therefore; the helping of people in distress.

Ultimately, God’s will is being done as people come to know Jesus Christ as Lord and Saviour and begin to reverse the effects of generations and even millennia of compounded sinful choices of rebellion against the way things were created to operate.  It is the cry of Jesus in Matt. 9:38 to ask the Lord of the Harvest to send out labourers.  It is as millions of people and even nations turn to God and begin living according to the way things were designed to be that the root cause of all pain and suffering will be dwelt with and the effects gradually decrease.  It is then that the will of God is being done.  So this prayer is both a prayer for God to move and a revelation of actions that we must take to see His will being done.

Note just because a natural disaster happens in a specific location or a child is sick or dies does not mean it is because of specific personal sin.  Many times we are just reaping the consequences of the sins of others [i.e. crime victims] or the effects of sin in the world generally [Luke 13:1-5].  Remember. everything and everyone is connected at some level.  Overall righteousness lifts people up and overall sin drags people down.

God is working toward His ultimate goal of eradicating sin and its consequences from the universe without destroying the human gift of free choice.  In doing this He will, if we allow Him, take the pain and evil intentions of others and turn it into good.  Remember Joseph?  He was an innocent boy betrayed by his brothers, sold as a slave, cast into prison falsely accused of rape who rose to become the second highest ruler in the most powerful nation of the time.  Likewise, even as we pray and work for God’s will to be done, we can have confidence that the pain we suffer can be used by God for our good and as a part of accomplishing the ultimate goal.

We also need to keep in mind that, as Christians, what we suffer - as great as it may be - is only temporary and will be overcompensated for in our permanent life with Jesus.  For the non-Christian, the pain and suffering of this world is but a pale reflection of the eternal consequences of sinful choices and the rejection of the indescribably great sacrifice God made to prevent it.

How is God’s will done in Heaven?  Perfectly.  How are we to pray and work for it to be done on earth?  Perfectly.  Then the root cause of pain and suffering will eliminated and Christ will return for a victorious Church [1 Cor. 15:20-28].