The Theory Of Evolution:
A Faith of Death and Destruction

Millions of people today accept the theory of evolution as an unquestioned scientific fact. They have come to this faith under the illusion that something which is preached so dogmatically and by so many "leaders" of different communities must be correct. They have failed to take notice that ideas behind the theory of evolution have led to the murder of millions of people by some of the worse dictators of history, the promotion of sickness and disease, fostering of hate, prejudice, and discrimination, and the hinderance of real scientific discovery. Heavy charges? Yes, and we will look at them later on.

"But he that sinneth against me wrongeth his own soul: all they that hate me love death." Pr. 8:36

Is The Theory Of Evolution
A Proven Fact?

Let's look some issues around the evolution theory.

Is it possible to observe the beginning of the universe? No; therefore, science can never prove ANY theory of origin. The best science can say is, "From experiments we have done in the present we guess this is what happened in the past." Any theory of origin that claims to be scientifically proven is dishonest.

That being the case, how do we accept the theory of evolution or any theory of origins? It must be taken by faith. Now that faith does not have to be a blind faith, it can be supported by scientific facts - but science can never conclusively prove it. 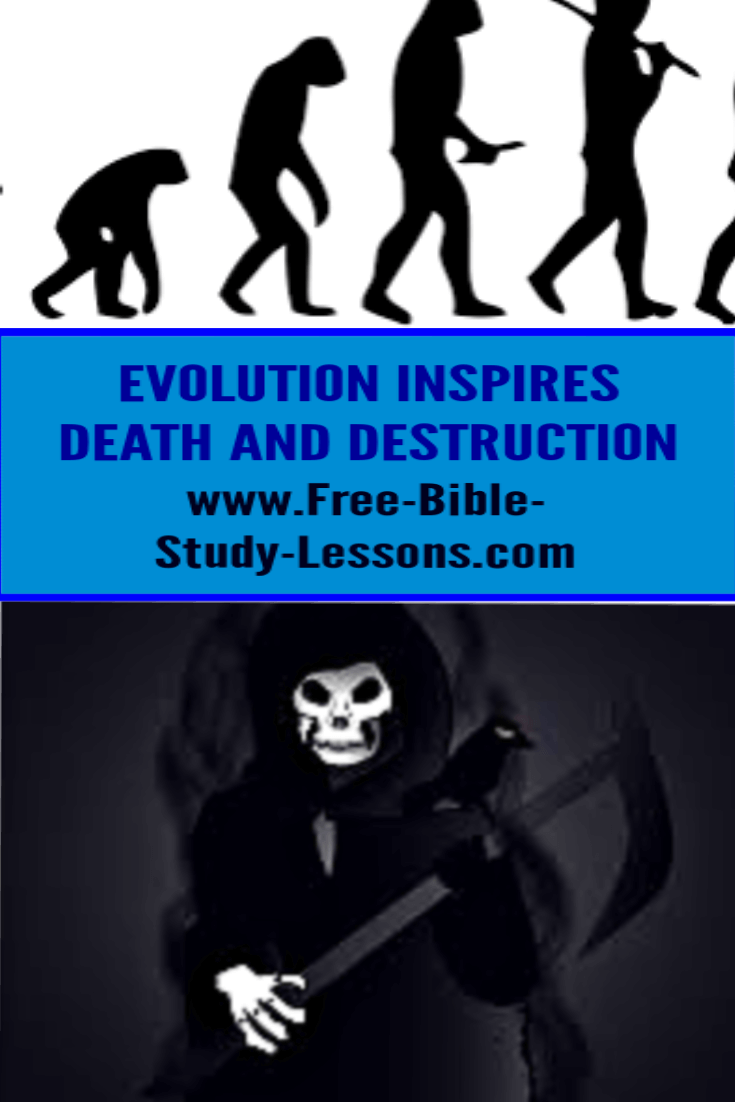 How does the theory of evolution bring death and destruction? The most important way is that it appears to give validity to the idea that there is no God. People can then go merrily on their way to the eternal torture chamber of the universe without so much as a thought of God. In fact, one of the biggest stumbling blocks to evangelism [at least in the West] is the theory of evolution. After all, people aren't stupid. They know that if evolution is true then God lied in the first chapters of the Bible. If He lied there, then how can anything He said be trusted. It may be a subconscious thought, but it prevents people from accepting the Bible as the Word of God.

Well-meaning but deceived Christians have tried to overcome this by compromising. They insert millions of years for evolution between Genesis 1:1 and Genesis 1:2 or they make the "days" of creation to be millions of years. It is obvious that the normal reading of Genesis 1-2 shows 24-hour days. Non-Christians can read, too. They know, better than some Christians, what the Bible teaches. They know that if the theory of evolution is true the Bible is false, and if the Bible is true then the theory of evolution is false. The only ones who are deceived by compromise are the compromisers! If we want to "win a hearing" we have to show that we stand for Truth. We need to accept the Bible as it is without compromise and at the same time show that established scientific principles do not contradict God's eye-witness testimony.

"And this is the condemnation, that light is come into the world, and men loved darkness rather than light, because their deeds were evil. For every one that doeth evil hateth the light, neither cometh to the light, lest his deeds should be reproved." John 3:19-20

The theory of Evolution is a dogmatically - and often blindly - held faith which is preached as truth in schools, colleges, universities, TV, movies, scientific journals, popular magazines, and even many "Christian" colleges and publications. Everywhere we turn this seems to be the underlaying foundation. Yet ideas have consequences...dangerous consequences.

Karl Marx, founder of communism, closely followed the teachings of Darwin and combined them with his economic theories. His disciple Lenin practiced them with rivers of blood. Joseph Stalin - the worst mass murderer of history - studied at a theological college,  but became an atheist after reading Darwin. Knowing that evolution does away with all morals he felt free to torture and murder at will. Adolf Hitler framed his racial and social policies on evolutionary ideas. Millions were murdered under his rule. Cambodia's Pol Pot's - another mass murderer - favorite authors were Darwin and Darwin's disciple, Huxley.

"...but many more people were killed [most by their own governments] in the name of evolution-inspired ideologies than in all the wars of recorded history put together, religious or otherwise." Carl Wieland

The theory of evolution inspired the ideas behind eugenics - which Hitler made famous - but he was by no means the only one.

"Eugenics is the attempt to breed a better human race by applying evolutionary principles. Its founder was Darwin's cousin Francis Galron [1822-1911]...eventually, eugenics would gain the support of such notables as President Woodrow Wilson, the Rockefeller Foundation, Margaret Sanger [founder of the abortionist organization Planned Parenthood] and Chief Justice Oliver Wendell Holmes. It was bankrolled by some of the richest people in America including the Carnegie Institution, Rockefeller Foundation, and the Harriman railroad fortune. The major textbook, Hunter's Civic Biology, blatantly taught white racial supremacy and eugenics. This was the one that the ACLU, in the famous Scopes Trial of 1925, defended the right to teach!

"The shocking results of the eugenics program included laws against so-called mixed-race marriages in 27 states, human breeding programs, forced sterilization of over 60,000 US citizens and even euthanasia. Eugenics was even allowed by the Supreme Court, which had once declared slaves to be non-persons and now denies humanity to unborn babies." Jonathan Sarfati

The theory of evolution has also been the idea which has fostered or prolonged medical ignorance and harm. The idea of evolutionary change led to the idea of useless parts in the body [called vestigial]. Body parts for which science had not yet discovered a reason for were assumed to be left over from evolutionary change. For example, at one time tonsils were considered useless and removed without much thought - after all they were only left over from some previous evolutionary stage. It has since been discovered that they are an important part of the immune system.

"In the 1930's, over half the children [in the US] had their tonsils and adenoids removed. Then medical scientists learned that tonsils are important to young people in helping to establish the body's defense capabilities by producing antibodies...Tonsils are the first line of defense against respiratory viruses and bacteria...For decades, millions of children were victims of evolutionary medical malpractice." Dr. Alan Gillen

Joseph Lister - father of modern surgery - pioneered aseptic surgical methods. He had to fight against the evolutionary ideas of his day to defend his belief that bacteria found in wounds were a result of contamination in the surgery room. He insisted on clean hands, a clean hospital, and developed techniques of asepsis.

"Many Darwinists in the 1880's still believed in spontaneous generation and felt that germs in wounds could magically appear from nowhere." Dr. Alan Gillen

Evolution truly is a faith of death and destruction. Is it likely to go away? No, it will be defended fanatically by its supporters. They will not accept God so they must have something. We must not be deceived into thinking the theory of evolution is good science. We must not compromise our faith by trying to squeeze in evolution. We must show that the theory of Creation fits the established scientific laws much better than the theory of Evolution. Plus the fact that Creation promotes respect, morality, and order while Evolution tears down all these things.