Climate Change is a highly emotional and fear-producing topic.  Like Evolution, its supporters claim scientific support, claim that it is a proven fact, and try to silence or destroy anyone who objects to it or even asks questions.  That, in itself, is a big hint that it is something in darkness that is afraid of the light.

To begin at the beginning.  God created the world and the universe.  The very first verse in the Bible states:

In the beginning God created the heavens and the earth. Gen. 1:1, NIV

He created it out of non-physical elements:

By faith we understand that the universe was formed at God’s command, so that what is seen was not made out of what was visible.  Heb. 11:3, NIV

It was the Word of God that created everything that we have.  He designed it and brought it into being.  He loves the world that He made and He redeemed it after it had rebelled [John 3:16]. 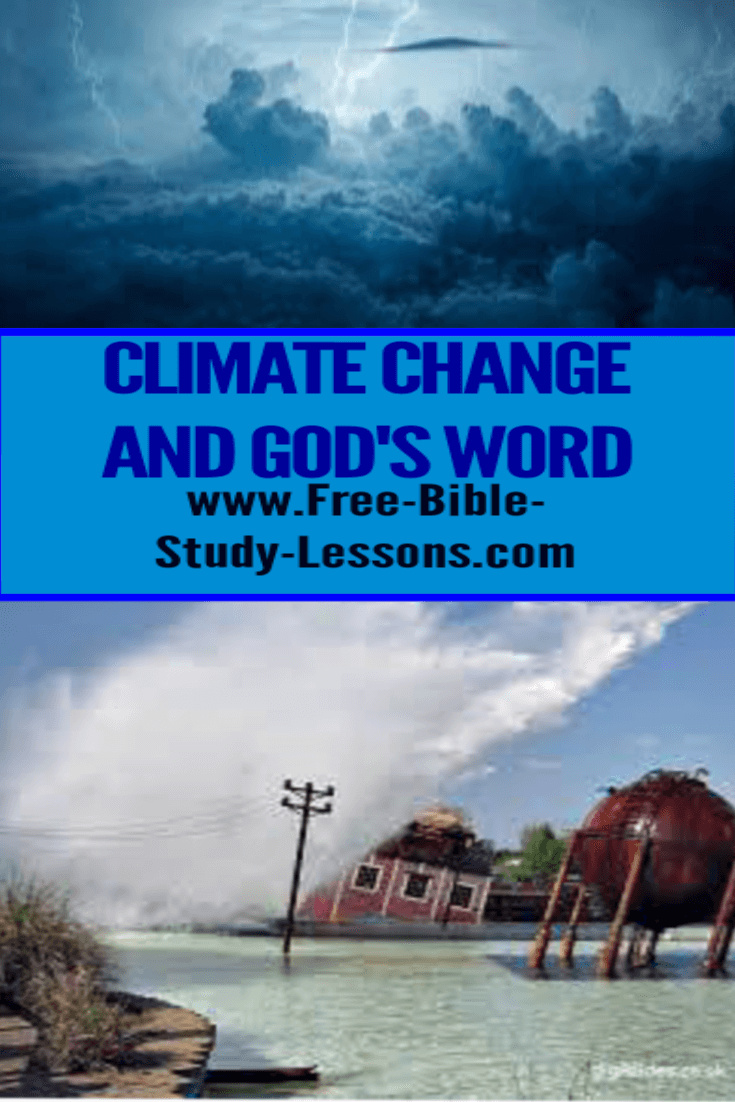 Actually, there has been in the past a man-made, planet-changing disaster that brought about dramatic climate change.  Ironically, the current Climate Change criers deny that this one ever took place, because they don’t like its real cause - human sin.

The Lord saw how great the wickedness of the human race had become on the earth, and that every inclination of the thoughts of the human heart was only evil all the time.  The Lord regretted that he had made human beings on the earth, and his heart was deeply troubled.  So the Lord said, “I will wipe from the face of the earth the human race I have created—and with them the animals, the birds and the creatures that move along the ground—for I regret that I have made them.”  But Noah found favor in the eyes of the Lord.  Gen. 6:5-8, NIV

It is likely that before the flood there was a global mildly tropical environment.  There were no extremes of heat or cold.  There were gently rolling hills, but no high mountains or deep valleys.  The conditions were so ideal that humans, even with the curse of sin, lived hundreds of years.  The world was created as a beautiful garden of which the Garden of Eden was the crown.

God’s judgment in the global flood changed all that.  We live on a deeply scarred earth, one with a vastly different climate than it was originally designed with.  Yet God is a God of redemption and our current world has many beautiful places.  There is even beauty in places that would not have existed before such has the high mountain passes and the low valleys.

Remember, God’s promise after the Flood?

And never again will I destroy all living creatures, as I have done.

“As long as the earth endures, seedtime and harvest, cold and heat,

Here we have a promise that, for the Christian, destroys the fear of a man-made Climate Change disaster.  God has promised that things will continue in their normal cycles as long as the earth lasts.

End Of The World?

But what if Climate Change brings about the end of the earth?

This world will end when Jesus returns.

Then the end will come, when he hands over the kingdom to God the Father after he has destroyed all dominion, authority and power.  For he must reign until he has put all his enemies under his feet.  The last enemy to be destroyed is death. 1 Cor. 15:24-26, NIV

No man-made calamity of any kind is going to end this world or force Jesus to return early.  This, of course, does not relieve us of the responsibility to properly care for this world.  It has been given to us as a trust to protect and responsibly develop, and for which we will give an account to the Owner.

There is no indiction in Scripture of the world ending in a disaster - natural or man-made - before or at the Return of Christ.  See my article:  How Will The World End?

Not only has God promised that normal cycles will continue on the earth until the return of Jesus, but also Jesus actively maintains the universe, including this world, by His Word.  It is the same Word that created it in the first place, so it is well able to maintain it.

The Son is the radiance of God’s glory and the exact representation of his being, sustaining all things by his powerful word. After he had provided purification for sins, he sat down at the right hand of the Majesty in heaven.  Heb. 1:3, NIV

Satan loves to drive people by fear.  It is a tool by which he can destroy lives:

1.  Physically this fear drives things like population control, abortion, governmental power and manipulation, and poverty.  It also diverts attention from genuine environmental concerns and possible solutions as well as draining financial resources to false solutions for a non-crisis.

2.  Mentally fear is a driving force behind mental illness, hopelessness and robs people of a vision for a joyful, prosperous future.  Their time, money and energy are spent trying to fix something that isn’t broken instead of building for their future and the generations to come.  Their children’s future is robbed while they are deceived into thinking they are saving it.

3.  Economically this prevents people from responsibly developing resources and products to better their lives and the lives of everyone.

4.  Spiritually fear and faith cannot co-exist.  Fear is faith in the problem.  People who are filled with fear have their life drained away from them, much to Satan’s delight.  Their attention is diverted from God, Who alone can give them a full and satisfying life now and forever.

Climate Change Is The Biggest Scientific Fraud Ever Perpetrated: Scientist