Yet at the same time many even among the leaders believed in him. But because of the Pharisees they would not openly acknowledge their faith for fear they would be put out of the synagogue; for they loved human praise more than praise from God.  John 12:42-43, NIV

Many of the leaders of Jewish society believed in Jesus, but did not have the courage to admit it in front of their peers.  They knew that excommunication was a very real possibility.  In that society, everything revolved around the synagogue.  To be cast out of the synagogue would basically be religious, social, economic death.  It would be to become a non-person in the eyes of your friends and neighbours.

In some places in the world, the same is true today.  To say that you are a Christian is to lose everything: family, job, home, etc.  It is to become an outcast.

Why Do Christians Make Excuses For God? 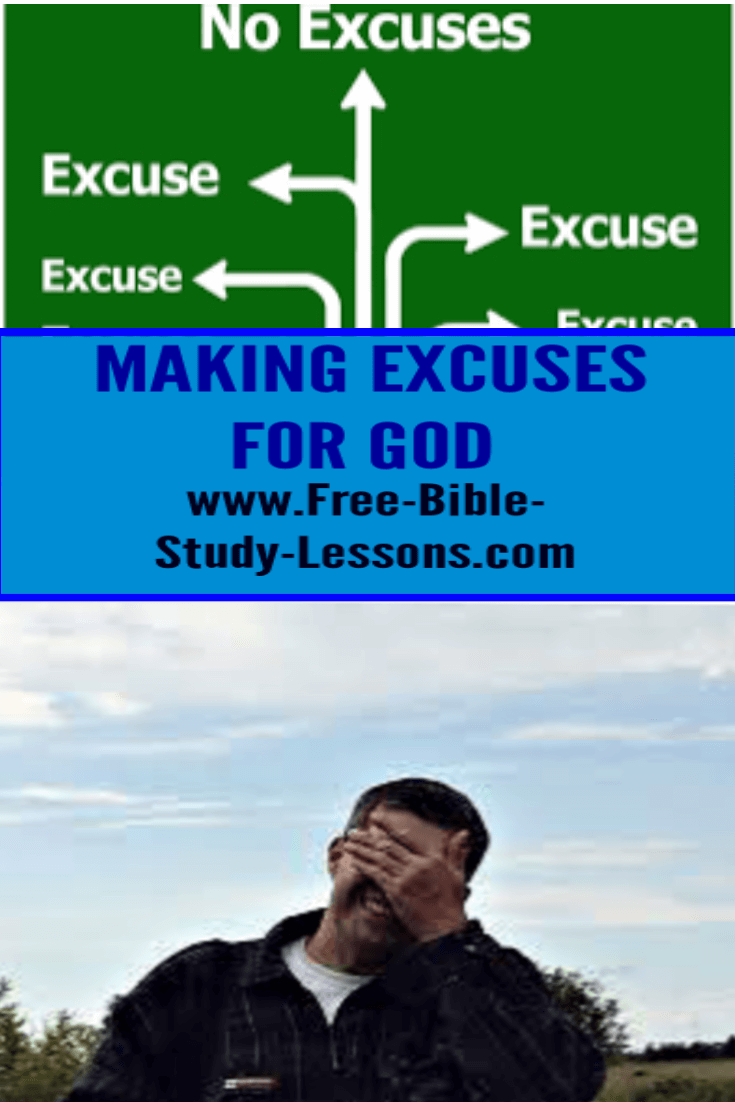 Some do it out of a sincere desire to win their friends to Christ.  They want to be seeker-friendly to the point of eliminating the cost and anything potentially offensive that may be a roadblock.  [Let me quickly add that some Christians go to the opposite extreme and are just plain offensive turning many people away from the Love of God - which is just as bad.]

Others make excuses for God out of ignorance.  They have never been taught what the Word of God teaches.  They either do not know how to study the Bible for themselves or have not invested the time to do it.  They simply believe what they have been taught, passing it on as Truth.  Sadly there are many false teachers out there as well as sincere teachers who are simply passing on what they have been taught without checking it out.

Finally, like the Leaders in the above verse, there are many who know - or could know - the Truth but are afraid that they will be rejected if they stand for Truth.  They know that there is a very real danger that their friends will laugh at them and reject them.  They know their careers may be sidelined or destroyed.  They know there may be a heavy cost to pay, and they are unwilling to pay it.  I suspect, that out of the three categories of those who make excuses for God, this is the largest one.  It certainly is the most influential one.

What I want to bring to your attention is four main areas today that Christians make excuses for God.  Four areas that many are afraid to take a stand on.  I don’t mean to say that a person is afraid in all four areas.  It may only be one or two that are their personal “trip points.”

The first area that people try to make excuses for God relates to the Blood.  You do not have to read very much in the Bible to know there is a lot of blood in there.  People today may watch gory movies, but they don’t like to think about animal sacrifices or the Blood of Jesus being shed on the cross.  And so some Christians - and even whole churches - do not like to talk about the Blood.

The second area is about God’s judgment.  Satan and dedicated sinners really hate the idea of judgment.  They live in a fantasy world where they think they can live however they desire without consequences.  The idea of standing before a righteous God and having to answer for all their words, thoughts and actions terrifies them - so they deny it.

Some Christians make excuses for God, joining the bandwagon that a loving God could never really sentence anyone to an eternity in Hell.  Now I am aware that Jesus did not focus on Hell and judgment when talking to unbelievers.  I am not saying that we should either.  However, what I am saying is that we should never deny the reality of Judgment and Hell.  Yes, our loving God is the One who will sentence people to the agonies of an eternal Hell if they reject His offer of free salvation.  A concept of Judgment and Hell will give us a concept of the seriousness of sin - a concept that many, even within the Christian community, lack.

The third area many Christians have made excuses for God and compromised in is the area of origins.  They go to great lengths to try to combine the radically opposite teachings of creation and evolution.  If it wasn’t so serious, it would be comical to watch their contortions.

Scientists especially are under a lot of pressure here.  If they come out in favour of Creation, they risk having their public and private research grants canceled - even if in totally unrelated fields.  They risk not be published [very important to be able to publish your findings] even on issues that have nothing to do with creation/evolution.  In short, there is the very real possibility that they will be laughed at and then ignored - ending their hard worked-for careers.  To various degrees the same applies to politicians, government employees and pastors in some churches.

The Law Of God

A fourth area in which it is becoming increasingly popular to make excuses for God is in the area of the Mosaic Law and the Old Testament events.  The New Atheists and others love to quote these laws and events out of context and either laugh at them as being absurd or accuse God of being a cruel moral monster [or both].  Christians are embarrassed that the Bible talks about slavery and other things.  There is an incredible lack of True teaching and instruction in churches on these things.  The average Christian [and, unfortunately, many pastors] has no idea how to interrupt these things.  Naturally, they are embarrassed since, when taken out of context, these do sound horrible and unreasonable.  They know that is not a true picture of God, but they don’t know how to deal with it, so they make excuses for God.

In making excuses for God, like those who compromise with evolution, they undermine the integrity of the Word of God.  God’s Word, including His Law, is far superior to anything man can come up with.  Many of our current laws, like Bankruptcy, are based on these Biblical Laws.  True, some of them are difficult to understand, because we live in a far different society and culture than those to whom they were first given.  [For an example see my article:  Does The Bible Force A Woman To Marry Her Rapist?]  It takes time and diligence to study out Biblical context, social context and historical context - something those who mock these Scripture have no interest in doing.  They just want to justify their own evil lifestyle.  So if you don’t understand something, admit it.  Nobody has all the answers!  Just don’t make excuses for God and try to explain away His Word.