Replacement Theology basically sees the Church as replacing Israel. It sees that Israel was rejected as the people of God and the new people of God are called from every nation to become one body in Christ. It does not see any present [or usually any future] place for the nation of Israel in Bible Prophecy.

Dispensationalism is in direct opposition to Replacement Theology since Dispensationalism sees the Jews as a special people of God with an unconditional, everlasting covenant with God which includes the right to possess the physical land of Israel. Dispensationalism has the Jews front and center of all God's works. It sees the Church as a gap in God's dealings with the Jews.

There are probably endless variations to both beliefs, but this a quick summary. It would seem that one must be correct and the other wrong. In fact, they both miss the bull's eye, although Replacement Theology at least hits the target! To be fair some who go under the label of Replacement Theology or are placed under that label by others really hold the view presented below.

What Does The Bible Teach About Israel And The Church?

“I will make you into a great nation, and I will bless you; I will make your name great, and you will be a blessing. I will bless those who bless you, and whoever curses you I will curse; and all peoples on earth will be blessed through you.” Gen. 12:2-3, NIV

God certainly kept His Word to Abraham. The Jewish nation, which came from Abraham, became a great nation. In fact, during the time of David and Solomon, it became the world power. And after the Name of Jesus, Abraham is perhaps the best known name around the world and in history. Three major religions give him a foundational place of importance. 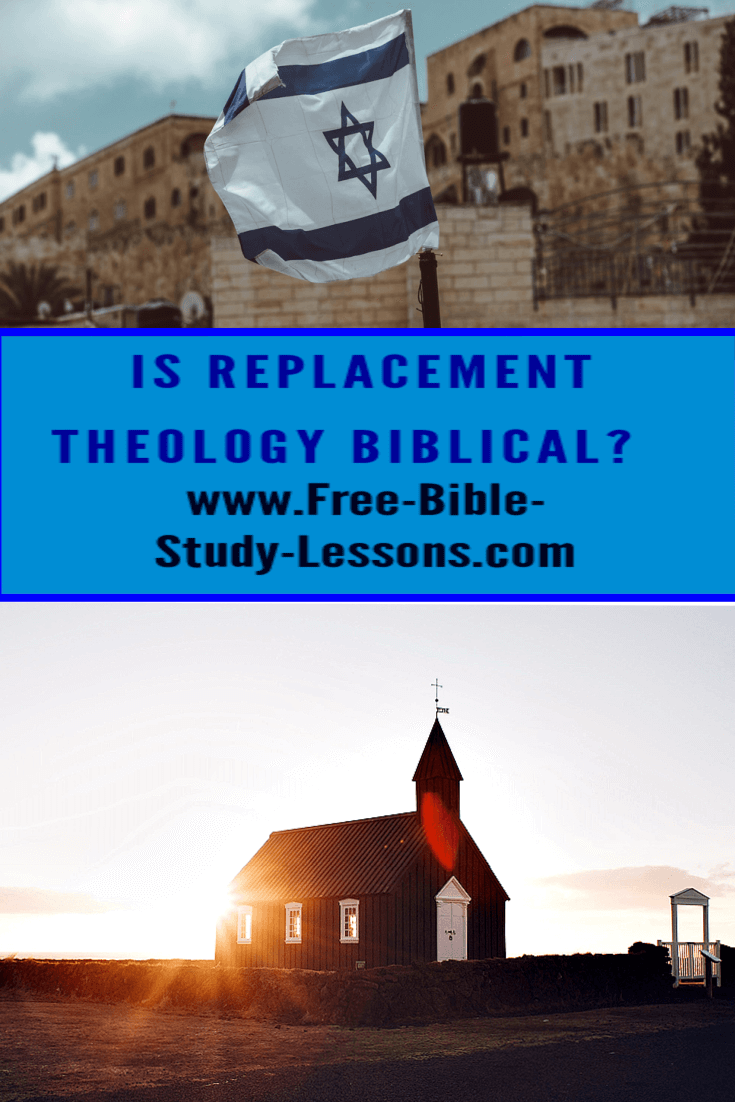 But the part we want to look at, the part that is often neglected, the last phrase: all peoples on earth will be blessed through you. Why did God bless and protect Abraham and later his descendants? The ultimate goal was that all people would be blessed through them. God's vision since the beginning was for the world. His love and attention was never intended to be limited to one nation. [We study all of this in detail in The Love Covenants.]

We see this again emphasized in the birth of Christ.

"But the angel said to them, “Do not be afraid. I bring you good news that will cause great joy for all the people. Today in the town of David a Savior has been born to you; he is the Messiah, the Lord." Luke 2:10-11, NIV

Notice again that the joy of the Messiah was to be "for all people." God's heart is big enough to include everyone, nor is He a racist to favour one nation above another.

"Then Peter began to speak: “I now realize how true it is that God does not show favoritism but accepts from every nation the one who fears him and does what is right." Acts 10:34-35, NIV

"But glory, honour, and peace, to every man that worketh good, to the Jew first, and also to the Gentile: For there is no respect of persons with God." Rom. 2:10-11, KJV

If God loves and treats all those who love Him the same, regardless of national origin, why did Paul say "to the Jew first," and why did Jesus say He was only sent to the lost sheep of Israel [Matt. 15:24]?

Good questions. To answer them we have to look at the purpose of the nation of Israel. Why did God set them apart in the Old Testament? God did not simply choose them because He loved them and hated everyone else.

Adam gave authority over this world to Satan when he joined him in his rebellion against God. In order to bring redemption, God would have to become a Man and conquer Satan. This ultimate battle would have to be planned extremely well for the destiny of every man, woman, child, and even the entire physical universe was at stake. There would be no second chance. If the battle was lost so was the physical universe and the terrors of Hell would be a reality for everyone. So in the ultimate plan, Christ would come. But things would have to be prepared. Israel was a central part of the plan at this stage. They would be the mother and the womb through which the Messiah would be born. They were important because of their mission, not because of who they were.

Because the Jewish nation was the womb through whom Christ was born, it was only fair that they have the first opportunity of entering the New Covenant era. The good news went to them first, but it was never intended to be limited to them. After they had had the first opportunity of entering the Kingdom of God - which many of them did - the good news went world-wide. And so it ever shall be.

The nation of Israel should have welcomed the Gentiles into the family of God and helped instructed them in the ways of God. But, like a cruel and self-centered mother, they tried to abort the purposes of God. They, like some Christians today, thought it was all about them.

How Do We Know That The Church Was The Plan? 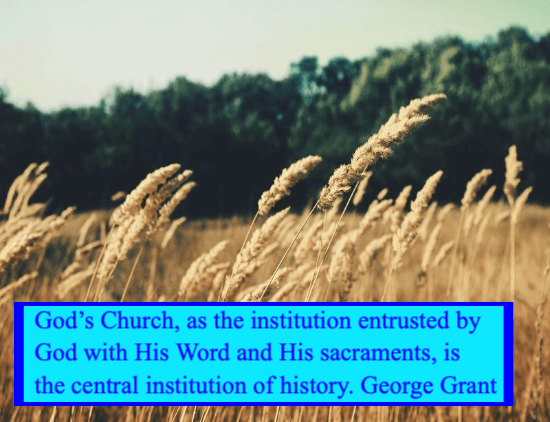 "Understand, then, that those who have faith are children of Abraham. Scripture foresaw that God would justify the Gentiles by faith, and announced the gospel in advance to Abraham: “All nations will be blessed through you." So those who rely on faith are blessed along with Abraham, the man of faith." Gal. 3:7-9

"So in Christ Jesus you are all children of God through faith, for all of you who were baptized into Christ have clothed yourselves with Christ. There is neither Jew nor Gentile, neither slave nor free, nor is there male and female, for you are all one in Christ Jesus. If you belong to Christ, then you are Abraham’s seed, and heirs according to the promise." Gal. 3:26-29

"The promises were spoken to Abraham and to his seed. Scripture does not say “and to seeds,” meaning many people, but “and to your seed,” meaning one person, who is Christ." Gal. 3:16

"It is not as though God’s word had failed. For not all who are descended from Israel are Israel. Nor because they are his descendants are they all Abraham’s children..." Rom. 9:6-7

Scripture is very clear. The promises of God were ultimately to His Son Jesus Christ. Jesus is the center. Everyone who belongs to Jesus is now an heir to the promises, everyone who does not belong to Jesus is disinherited. [You can pursue this in detail in The Love Covenants.]

But what about the promises to Abraham, Israel, and others in the Old Testament, didn't they have any literal meaning? Of course they did. Let's take the famous "Land" for example. God did promise Abraham and his descendants the land of Israel. True, it was a picture of what was coming on a spiritual plane, but it was a physical possession. They did inherit it and if they had kept the conditions of the covenant they would have been able to enjoy the land in peace until the Second Coming. However, since the terms of the covenant were violated the physical land is no longer a Biblical promise, only the spiritual reality remains.

So How Are We To Read Old Testament Scriptures Involving Israel? 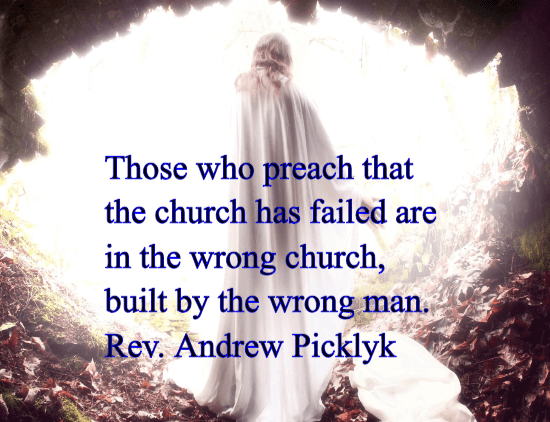 "The spiritual did not come first, but the natural, and after that the spiritual." 1 Cor. 15:46

God was doing many things in the Old Testament, one of which was drawing a picture of what His plan was for the final era, the New Testament era. In many ways Israel was a type of the church. When we read of Israel in the Old Testament we have to ask three questions and use context to determine the correct answer.

1. Is this Scripture talking only about natural Israel? There are Scriptures which are not using Israel as type of the Church. For example:

2. Is this Scripture talking only about spiritual Israel? When teaching about the New Covenant Age in the Old Testament, God had to use terms with which the people were familiar. For example:

Here God is looking forward to the New Covenant. He uses the terms "people of Israel" and "people of Judah" as a type of the Church. They were terms that the people could understand. That God was thinking of the Church is evident by His writing the law on the hearts which happens to Christians - we have the "want to" to be obedient. In natural Israel there were many people who did not have a true relationship with God. In fact, in Elijah's time the number of true believers was down to 7,000, but the only way into the Church is by believing in Jesus Christ - so all Christians know Him. It is impossible in any physical nation to have everyone know God.

3. The third possibility is that the Scripture is talking about natural Israel but with a spiritual meaning focused on the Church. For example:

“'Moses my servant is dead. Now then, you and all these people, get ready to cross the Jordan River into the land I am about to give to them—to the Israelites.'" Jos. 1:2

Here we have a historical happening. It was a fulfillment of God's covenant with Abraham, but it is also a type of the Church going to receive and achieve everything God has given it. The spiritual anti-type in no way lessens the meaning or fulfillment of the physical promise.

We have to see both Israel and the Church in their proper place in Scripture. Jesus Christ is the center of all Scripture. A world-wide people of God has always been the objective. In this Israel had an important part to play, but it was not the central focus of God's desire for the ages. It was not replaced by the Church. The true believers in Israel in the Old Testament were the "pre-birth" Church. All true believers from creation to the second coming form one body, one church.