Did Jesus
Disrespect His Mother?

We have very few recorded interactions between Jesus and His mother, Mary.  In two of them Jesus sounds like He is treating His mother with disrespect and even harshly.  In Cana when Mary asked for His help he replied, “Woman, why do you involve me?”  [John 2:4, NIV].  That doesn’t sound like the compassionate and concerned Jesus we know.  And when His mother and brothers wanted to speak to Him while He was teaching he seems not only to ignore them but to place everyone in the crowd above them [Matt. 12:46-50, Mark 3:31-35, Luke 8:19-21].

One of the vital keys in understanding difficult Scriptures is to always start with what is clearly taught knowing that Scripture will never contradict itself [as we see in the Feed Yourself course].  So before we look at these two incidents in the life of Christ, let’s draw two clear facts and one conclusion.

In order to be the Saviour of the World Jesus had to be perfect.  If He ever sinned - even once - in thought, word or action then He is disqualified and we are trapped in our sins for all eternity.  The Bible clearly teaches that Jesus lived a perfect life.

“For you know that it was not with perishable things such as silver or gold that you were redeemed from the empty way of life handed down to you from your ancestors, but with the precious blood of Christ, a lamb without blemish or defect.” 1 Peter 1:18-19, NIV

The Bible clearly teaches that disrespecting one’s parents is sin.  God puts a high value on family and family structure.  God does not tolerate rebellion to any lawful authority and the family is a root authority.  In fact, God placed this command directly in the Ten Commandments at the beginning of the second section with deals with human relationships.  And, as Paul points out, it is the first command that comes with a reward.

“Honor your father and your mother, so that you may live long in the land the Lord your God is giving you.”  Ex. 20:12, NIV

Children, obey your parents in the Lord, for this is right.  “Honor your father and mother”—which is the first commandment with a promise—  “so that it may go well with you and that you may enjoy long life on the earth.” Eph. 6:1-3, NIV

Jesus himself criticized the Pharisees and Teachers of the Law for allowing adult children to disrespect their parents.  If He Himself had done so he would have been as hypocritical as they were.

And he continued, “You have a fine way of setting aside the commands of God in order to observe your own traditions!  For Moses said, ‘Honor your father and mother,’ and, ‘Anyone who curses their father or mother is to be put to death.’ But you say that if anyone declares that what might have been used to help their father or mother is Corban (that is, devoted to God)— then you no longer let them do anything for their father or mother. Thus you nullify the word of God by your tradition that you have handed down. And you do many things like that.” Mark 7:9-13, NIV

As Feed Yourself students know, we need to look at Biblical, historical and social context to correctly understand Scripture.

Did Jesus Treat His Mother
With Disrespect In Cana? 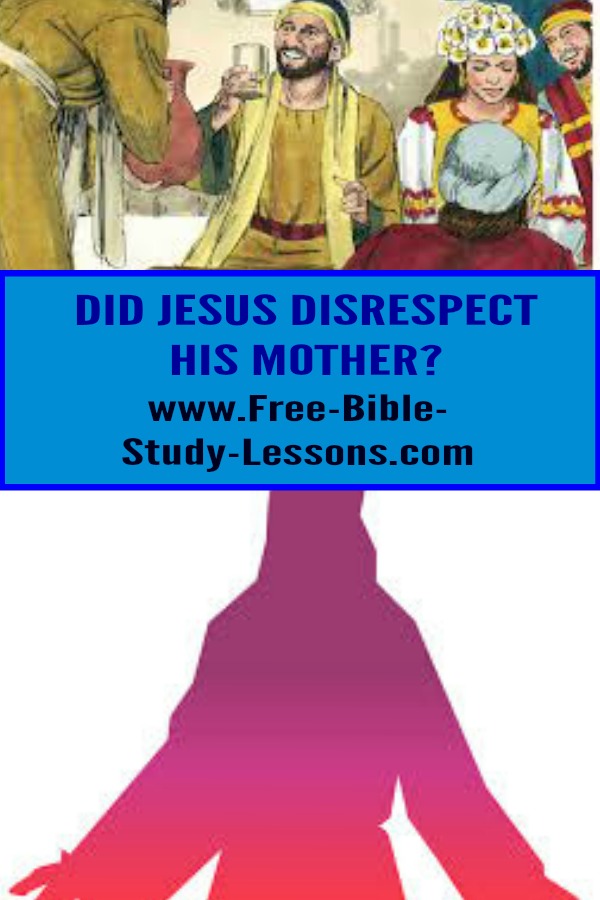 What was happening here?  Mary had been invited to a wedding feast.  The invitation has also included Jesus and His disciples.  This leads some people to believe that it was the wedding of a family member or close friend; however, that is not important to the story.  While there the wine began to run low.  Jewish tradition believed that running out of wine at the wedding feast signalled a cursed or unhappy marriage.  So this was more than just an approaching embarrassment.  It was a looming disaster.  [Of course, Jesus would not have believed in such superstition Himself.]

Mary, the mother of Jesus, approached Him and asked Him to do something.  What she had in mind nobody knows, but she had confidence in her Son.  He would have an answer.  it is likely that Joesph had passed away and Jesus, as the eldest Son, had been managing the family business and providing for the family for years.

Some take offence right away as Jesus refers to her with the somewhat cold word: woman.  While the word “woman” is a correct translation [translated woman 129 times and wife 92 times in KJV] it does not have the cold implication in the Greek as it does in English.  Remember, that a correct translation can give a misleading appearance if it was understood differently to the speaker.

For example, I could say “I am up to my ears in work.”  That could be translated into a foreign language accurately but the reader could misunderstand my meaning.  Or I could say, “My wife is a wonderful lady.”  Absolutely true in the sense that I mean it ,but someone immersed in the culture of royalty, lords and ladies could misunderstand my claim - even in English.

A few versions in trying to overcome this negative impression have translated “woman” as “dear woman” [NLT], “mother” [CEV] and “dear lady” [ISV].  So while “:woman” is a correct translation, it was not a disrespectful way for Jesus to address His mother in that culture.

But what about Jesus’ words, “why do you involve me?”  That sounds as if he is upset with her or pushing her away.

Again, that translation is missing an important point.  Jesus actually included Mary in His statement.  Young’s Literal Translation puts it this way:  “What -- to me and to thee, woman?”  In other words Jesus is asking, “Why is this our problem or responsibility?  We are guests.”

The response of Mary in telling the servants to do what Jesus told them to do shows that Jesus’ words were in no way perceived by her as being disrespectful…or even a denial of her request.

Jesus’ reason for not being pro-active in helping in this case was that “His time had not yet come.”  The entire destiny of the world - literally - was on His shoulders.  Just one misstep and it would all be over.  Jesus was in preparation stage, not quite ready to step into the spotlight.  Yet, at the request of His mother, He receive permission from his Father [John 8:28] to perform His first miracle.  This shows incredible respect and love.

Did Jesus Disrespect His Mother When She Came To Visit?

One day as Jesus was surrounded by a crowd teaching, His mother and brothers arrived and wanted to speak to Him, but they couldn’t get near to Him because of all the people.  Someone told Him that they were outside waiting but instead of dismissing the crowd or Himself He states that all His disciples are His mother and brothers and sisters.  This story is told in three of gospels [Matt. 12:46-50, Mark 3:31-35, Luke 8:19-21] so it must have made an impression on the minds of the disciples.

Did Jesus treat His mother with disrespect here?  Consider that Jesus, although in intensive full time ministry and under constant pressure even for His personal safety continued carrying on His family responsibilities until almost His last breath.  From the cross He charged the disciple John to take over the responsibility [John 19:26-27].  There was no abandonment of His natural family or lack of care and concern for their needs.

On the other hand, He had to be about the Father’s business.  He could not allow His mother - no matter how much He loved her - to interfere in His ministry.  She had to let her adult Son run His own life.  [Something some parents even today need to learn, but even more so in the culture of Jesus’ day.]

In including all true believers as part of His intimate family, Jesus was showing priority of spiritual connections.  Remember, too, that Mary would have included in this as she was a true believer although His brothers were not at this time believers.  Jesus showed this again from the Cross as He committed His mother to His disciple John not the oldest stepbrother as would naturally have been the case.  The spiritual relationships are the priority.  This should be the uttermost consideration when considering who should be the guardians of our children [or elderly parents] in the case of our own death.

By giving priority to spiritual relationships Jesus was not disrespecting or abandoning natural ones.  He was showing an order of priority.  God full expects us to look after our natural responsibilities [1 Tim. 5:8].  [See exception in this article: Helping There Poor Is Whose Responsibility?]  But we cannot allow natural [or even spiritual] connections to distract us from what God’s will for our life is.

Did Jesus treat His mother with disrespect ever? Short answer: No.