Helping The Poor
Is Whose Responsibility?

Helping the poor is a command from God. Charity work has always been an important part of Christian life.

"In Joppa there was a disciple named Tabitha (which, when translated, is Dorcas ), who was always doing good and helping the poor." Acts 9:36

Paul, in his no-nonsense style, comes directly to the point about helping the poor:

"If anyone does not provide for his relatives, and especially for his immediate family, he has denied the faith and is worse than an unbeliever." 1 Tim. 5:8 [NIV]

The primary responsibility for helping the poor falls on their own family. A family is close to the situation, so they know the real need. They know if their family member is in genuine trouble or if they are only faking it to get out of working. It is much harder to commit welfare fraud when the watchful eyes of the family are in charge. They know if Will Welfare is in trouble because of drinking, gambling, or laziness or if he is a hard worker who has fallen on hard times. 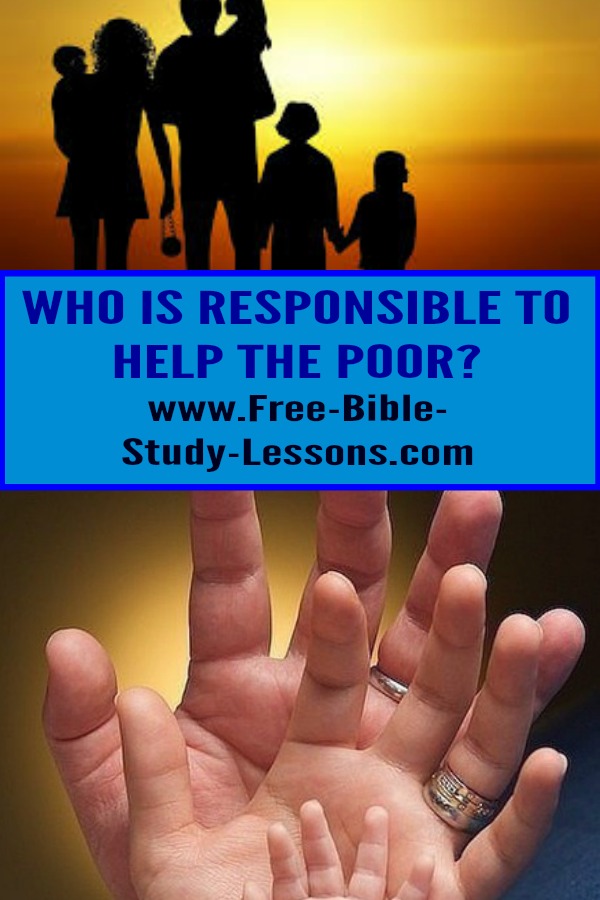 After accessing the situation, the family is charged, to the best of its ability, to provide for helping the poor of its own members. This may be financial help, but not in every case. It may involve training in how to handle finances or budgeting. It may be providing a temporary place to stay until the individual or family can get back on its feet again. It may be a loan which needs to be repaid [interest-free] or a gift. The possibilities are as endless as the situation demands. But the family is the one who is charged with helping its own poor. Note: A TV is not a necessity and neither is designer jeans. A true necessity is that which is needed for survival: basic food, clothes, shelter.

“The family is the primary agency of social welfare in every civilization.” Dr. Gary North

“It is the responsibility of the head of each household to care for those members of his family who are in need." Dr. Gary North

“The family bears the major responsibility for financial [and other] aid, and no other institution or group must usurp this responsibility.” David Chilton

No family is required to support members who fall into the categories below:

1. A family member who is lazy and refuses to work no longer has the right to help from the family. He needs to suffer the consequences of his actions. His hungry stomach must be allowed to drive to work and self-discipline. The family has no mandate to help a member who refuses to be a productive member of the family or society.

Paul is back and to the point again:

2. A family member who follows unwise financial policies and refuses to change has no right to expect the family to support his irresponsibility. If he is constantly going into debt, “investing” in foolish or get-rich-quick schemes, or doing other unwise things, the family should attempt to teach him good financial management. It may even involve managing his finances temporarily for him [if he agrees] until he develops the self-control and self-discipline to manage it for himself. If he refuses to accept such help in getting his finances under control, the family no longer has a responsibility to help him.

4. A family member who undermines the religious teaching of the home has no right to support from the family. If he talks against the family beliefs, tries to convince other members to leave their faith, or otherwise undermines the family faith, he no longer has the right to the help and support of his family. An atheistic parent, for example, who lives with an adult child and criticizes the faith of the parent to the children should be removed from the home. Non-Christian religious people will often cut off family members who convert to Christianity. While we should not cut off family members for personal beliefs, if those beliefs are disruptive then they have no right to support - although we still love them.

As you can see, helping the poor family member does have limits. Because of the sin nature, God does not make unconditional requirements in human relations. 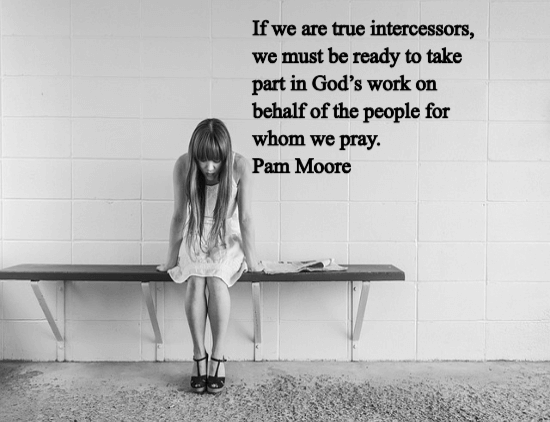 Sometimes families, for a variety of reasons, are unable or unwilling to help its poor family members. The secondary responsibility for helping the poor belongs to the Church and private charity organizations. Like the family, these organizations are more in touch with the real needs of the poor and less like to be deceived by the lazy and undeserving.

It is important to note that the Church and private charity organizations are funded through voluntary contributions. This is not socialism where one person's money is taken by force [tax] to be given to someone else. The donors will naturally require their hard-earned money to be spent responsibly in helping the poor. If they see an individual church or charity organization wasting money or spending it on the lazy, they are motivated to warn the organization and withdraw their money if a solution is not reached. This introduces a needed level of accountability in the management of money on the behalf of others.

We should also point out that ALL Biblical charity - family or church - is intended to be short term. The goal is to provide needed help in a time difficulty to get the poor individual or family back on their feet. If our helping the poor is not enabling them to provide for themselves and become - or return to being - a productive member of society then something is wrong. Either the "solution" is not actually helping or the person is simply taking advantage of "free" money. Either way something needs to be changed.

“No widow may be put on the list of widows unless she is over sixty, has been faithful to her husband, and is well known for her good deeds, such as bringing up children, showing hospitality, washing the feet of the saints, helping those in trouble and devoting herself to all kinds of good deeds.” 1 Tim. 5;9-10

Under no circumstances is the civil government responsible for helping the poor other than - as with everyone else - providing a safe environment in which they can live and work. Remember, the civil government has no money of its own. The only money it has is the money it takes from its citizens either through taxes or inflation. Therefore, for the government to be involved in welfare is forced wealth distribution. It is stealing from some citizens to give it to others. While God commands charity, He gives no human institution the right to enforce His charity laws. He has declared that He Himself will be the enforcer.

"Do not mistreat an alien or oppress him, for you were aliens in Egypt. Do not take advantage of a widow or an orphan. If you do and they cry out to me, I will certainly hear their cry. My anger will be aroused, and I will kill you with the sword; your wives will become widows and your children fatherless." Ex. 22:21-24

In the great welfare states of Canada, the United States, and other Western countries, the State has taken over the responsibility of helping the poor. Depending on the country, they provide, welfare, child tax credit, GST credit, job search opportunities, medical attention, education and career training, and much more. Unfortunately, their efforts have only made matters worse. They have created a permanently poor class. In trying to help the poor, they have widened the gap between the rich and poor and put more people on the poor side. Fraud in the welfare system is well-known. Many people learn how to “use” the system, while those who genuinely need help - but are ignorant of how the system works [or are too honest to lie] - are deprived of needed help. Anytime the civil government declares war on something - such as the War On Poverty - you can count on the problem getting worse and innocent people getting hurt.

Why does the civil government want to be in the welfare business? One important reason is power. A law that God has placed into the universe is that “he who serves, rules.” Welfare programs give the government increasing power over people’s lives and creates a dependent citizenry that is easier to govern. This is why communist Russia refused to allow any charity organizations to operate except the state. They were not going to surrender power to anyone - even if their citizens starved to death. This is the same reason why some dictators refuse emergency aid for disaster victims in their countries. To them it would be a declaration of weakness.

“It is significant that in the Soviet Union...charitable activity is strictly forbidden to religious groups. If a church group were to collect funds or goods to administer relief to sick and needy members of the congregation or community, it would immediately create a power independent of the state as the remedy for social problems. It would moreover create a power which would reach people more directly, efficiently, and powerfully. The consequence would be a direct affront to the preeminence of the state. For this reason, in the democracies orphanages have been steadily the target of repressive legislation to eliminate them, and charity has been preempted by the state increasingly as a major step toward totalitarianism.” R.J. Rushdoony

As we look at the world today, we are not saying that the civil government should instantly stop helping the poor. Millions of people would be left destitute. What must happen is that the Church must train families to look after their own and must, along with other charity organizations, have programs ministering effectively to the poor so that the government systems can be smoothly replaced. In that case, the majority of the people to get "hurt" would be the lazy who were just taking advantage of the system. If the government is sincerely interested in helping the poor, it must  make it easy to start and operate businesses. This means the elimination of the majority of regulations, licensing, zoning, taxation, minimum wage laws, and other oppressive acts which hinder or prevent the poor from working. Until they do that their "help" for the poor is only a cruel power grab.