God has different ways of working at different times and in various circumstances.

”And it came to pass when Moses held up his hand, that Israel prevailed: and when he let down his hand, Amalek prevailed.” Exodus 17:11

Israel had just been delivered out of Egypt. Three and a half million [at best guess] ex-slaves trudged through the desert toward Mount Sinai. Along the way they were attacked by the vicious people of Amalek. Moses chose Joshua to lead the defence of the people. The outcome of the battle, as the above verse states, depended not on military strength or wisdom, but on the position of Moses’ hands.

I would like to bring two things to your attention from that verse.

First, victory or defeat can depend on things we don’t see as having an obvious connection. What does the effectiveness of Joshua and his men’s swords have to do with Moses’ hands? What difference does it make? In this case, it meant victory or defeat, although logically there should have been no connection.

When we are in battle we have to realize:

a] that the cross of Christ is our foundation for victory. What is the connection between Jesus dying on the cross 2,000 years ago and with our current struggles? Everything. If we are not standing firm on Christ’s victory and applying it into our lives, then no permanent victory is possible.

b] sometimes behind-the-scenes activity - such as prayer - can mean the difference between victory and defeat. We may not even be aware that it is happening. God may move on someone to pray for us at a time of need and we may not even find out about it until we get to heaven. On the other hand, if God is putting someone on our hearts to pray for or do something for we need to be obedient. It could be the very thing that tips the scales to victory.

c] God raises up the team He wants. He wanted both Joshua and Moses, but they were not doing the same thing. Sometimes we criticize others for not doing what we are doing, but God doesn’t have everyone involved in the same activity. He has different ways for different people. It is as we are obedient to God in where He has placed us and in what He has given us to do that He works everything together in His master plan. We may or may not ever see the connection.

Obedience In Different Ways Of Operation 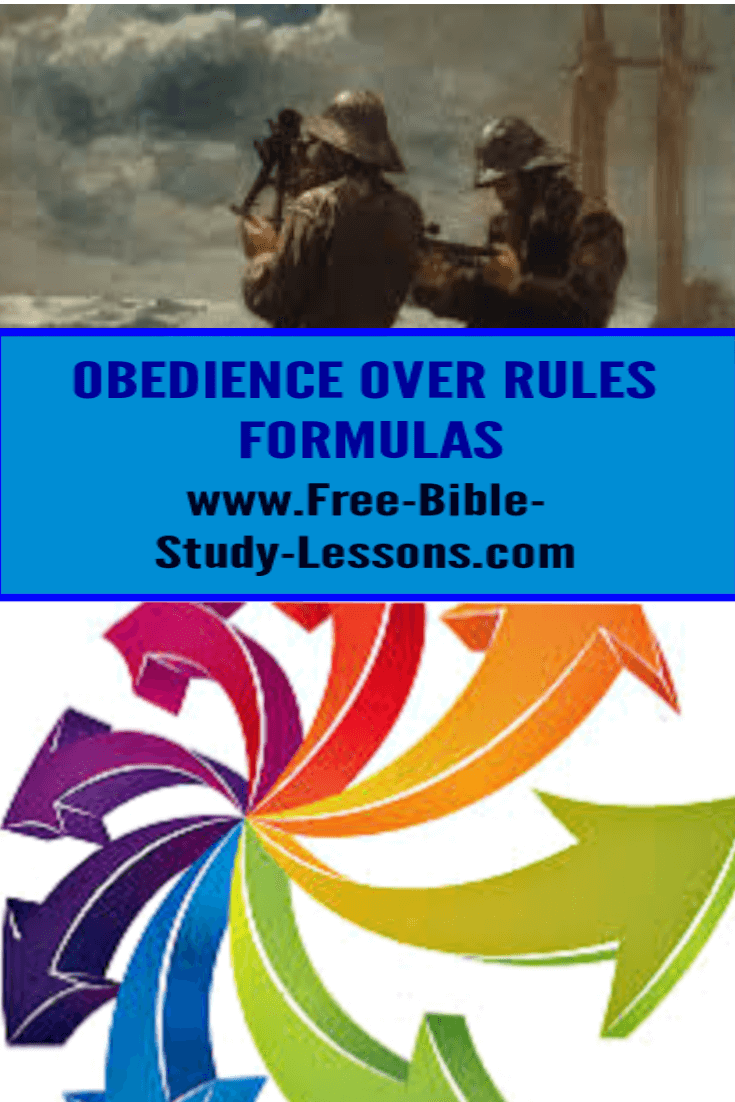 Second, the principles of God never change, but His methods do. In the above case, victory was secured through both Joshua’s fighting and Moses lifting up his hands. One without the other would not have worked. However, Israel fought many successful battles after this and yet we have no record of Moses lifting up his hands again. This shows a very important spiritual principle about God's different ways: God is interested in obedience not in formulas.

As human beings we tend to like formulas. “Just give me the steps...one, two, three...and I will take it from there.” What would have happened in the next battle if Moses had gone into a mountain and raise his hands? Nothing. God had a method for one particular battle, it didn’t guarantee that the same method would work in every battle. God has different ways which means the key is depending on God not on a system.

Or look at the life of Jesus. In one case He put spit on a man’s eyes to heal him of blindness... but He didn’t do it every time. In fact, Jesus rarely used the same method twice in healing. Again, with God's different ways, the key is not in the method, it is in an obedient relationship with God.

We like formulas because they give us a sense of control. We know if we go through the steps correctly then we will get the desired result. [And if we don’t get the desired result we condemn ourselves for missing a step or get mad at God for “not being there.”] Above all things we like to be in control. Sometimes we misuse formulas to try to manipulate God into doing what we want Him to do. We think that if we do steps one, two, and three that forces God to come through on step four. [“God, if I promise to pray and fast then You must...”] God wants us to learn trust and obedience. We can trust in God’s faithfulness to His Word/Principles, but we cannot trust to a method or formula. God is the One Who is in control. We have to learn to rest in that fact.

Sometimes we want to copycat someone we admire or who has a successful ministry. God’s method for them may not be His method for us. And even successful ministries and people can fall if they become dependent on a method instead of on listening to God. “We’ve never done it that way before” is the death blow for the purposes of God in the lives of individuals, churches, and organizations. Let’s not put our trust in formulas or methods, but in the Lord our God. He may have different ways, but He is always the same.