Does God Remain
Faithful To The Faithless?

Here is a trustworthy saying: If we died with him, we will also live with him; if we endure, we will also reign with him.  If we disown him, he will also disown us;  if we are faithless, he remains faithful, for he cannot disown himself.  2 Tim. 2:11-13, NIV

Before we look at this verse specifically I want to look at Romans 3:2-3 as it shone light on this passage for me.

Much in every way! First of all, the Jews have been entrusted with the very words of God.  What if some were unfaithful? Will their unfaithfulness nullify God’s faithfulness?  Rom. 3:2-3, NIV

As I was thinking about these verses, I realized that God is faithful.  However, I asked myself to what is God faithful?  Did He remain faithful to the faithless Jews of Paul’s day or was He being faithful to something else.  As we consider these verses in context we see that God was being faithful to His Word even though those to whom it had been entrusted were unfaithful.  God will not allow His Word to fail regardless of the failures of men.

Now let’s look back at 2 Timothy.

Faithful To The Faithless? 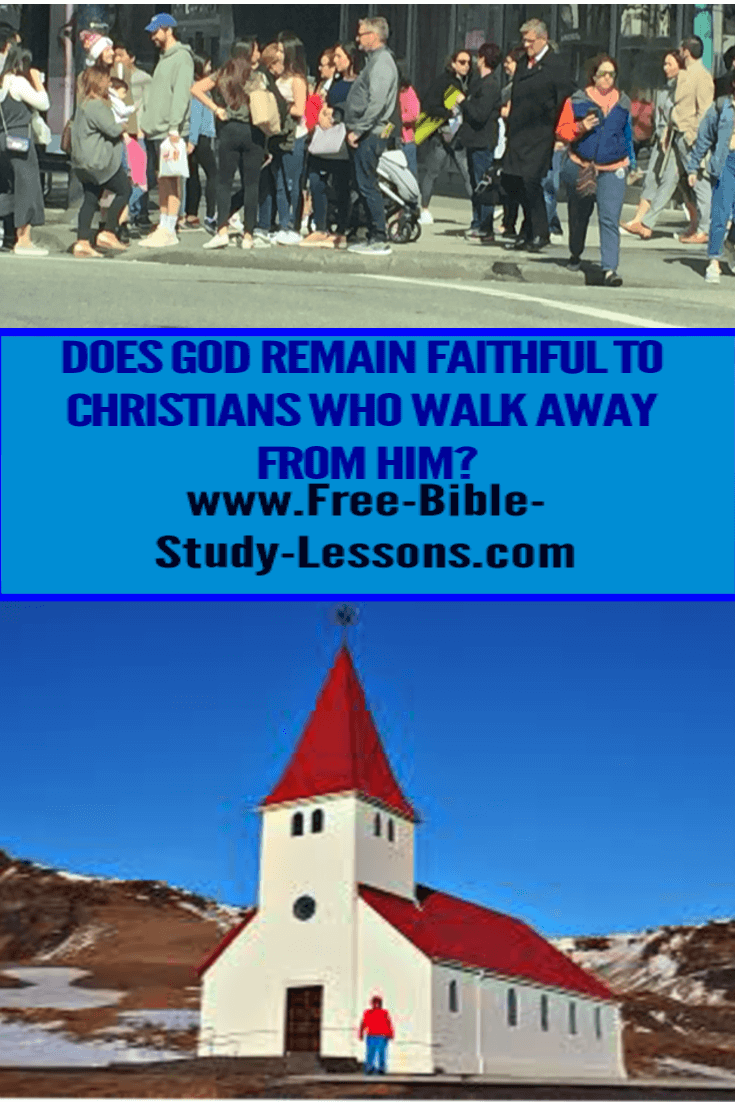 If we take Verse 13 by itself it can appear to be saying that God remains faithful to the faithless.  It looks like a person can walk away from God, but God will still look after them because of Who He is.  However, as Feed Yourself Students know, when trying to understand a verse we need to look at context.  Verse 13 isn’t even a complete sentence.  The first part of the sentence plainly states that if we disown God, He will disown us.  This is confirmed by the words of Jesus:

It becomes plain when we look at the entire sentence that God is not promising to remain faithful to the faithless.  In fact, He will judge them.  God would not be righteous if He honoured unfaithful or rebellious works simply because the people had claimed to be in relationship with Him.  When we understand the concept of Blood Covenant, we know that the innocent party is required to bring judgment on the offending party.

This is also confirmed in Galatians 6:7-8:

So using using 2 Timothy 2:8 to say God will remain faithful to the faithless is giving false hope to those who need, instead, to be brought to repentance.  In recent years we have seen famous Christian ministers, writers and singers turn their backs on the truth of God’s Word and embrace the ways of the world.  If they do not repent of their horrible apostasy, they will meet a fearful judgment.  I have also seen Christian leaders callously violate Biblical ethics and continue to lead churches which appear to have a “moving of the Spirit.”  These churches have a rottenness at the core which will be judged as will any member who knows of the violations and refuses to hold their leaders accountable.

Does this mean that we can lose our salvation?  If you have read much on this site, you will know that I believe in Eternal Security.  I do not believe you can be unborn.  A person can be still-born [i.e. have an emotional or intellectual experience without a heart change], but, if they have been truly Born Again, they cannot be unborn.  Things may change, but God never “de-creates” anything.  [This, of course. is one reason for Hell.  The devil and his followers cannot be annihilated, so they must be in eternal isolation after the Return of Christ.]

So how do we explain those who turn from faith to faithlessness?

1.  In the case of Jews of the Old Testament times [called former days], God entrusted His written Word to the nation knowing full well that only a remnant were true believers.  The Jews who were rebellious and unfaithful were only revealing their unredeemed nature.

2.  In a similar way, the Church, in general, is entrusted to reveal the Word and ways of God, but there are many who claim to be Christians or attend church who have not been redeemed.  Some work their ways into positions of leadership or authority for power, prestige, money, community or other motives.  When the times become challenging, they reveal their true nature.

3.  Some genuine Christians give in or give up under the pressure of the world.  They do not lose their salvation, but they will lose their reward or a portion of it [God is Judge].  Their entrance into the eternal life beyond the one is which we now live may be “so as by fire.” [1 Cor. 3:15]  No matter how long we live in this life it is only a tiny bump on the line of eternity.  We want an abundant eternity!

So in 2 Timothy what was is God remaining faithful to?

If we read from the beginning of the chapter, we will see that Paul is talking about being faithful to the gospel, sharing its truth and being willing to endure whatever hardships may come because of it.  God is faithful to His Word.  If the people to whom the Word has been entrusted prove to be unfaithful, God will still remain faithful to His Word.  The failure of men does not change the Word of God either in its written form or in its application by the Holy Spirit.

Does this mean that Christians who walk away from God are now without hope?  Of course not.  God is a loving Father.  Like the father in the story of the Prodigal Son [Luke 15:11-32], He longs for them to repent and return.  However, He is not going to empower them in their faithless choices.