Perpetua was a courageous young mother who suffered martyrdom in AD 203.  She is the first female Christian martyr of whom we have a detailed account because she left us a diary covering the events of her martyrdom right up until it was time to go into the arena.  She had several dreams while in prison awaiting her death, but there is one in particular that I would like to bring to your attention.

Here is Perpetua's dream in her own words: 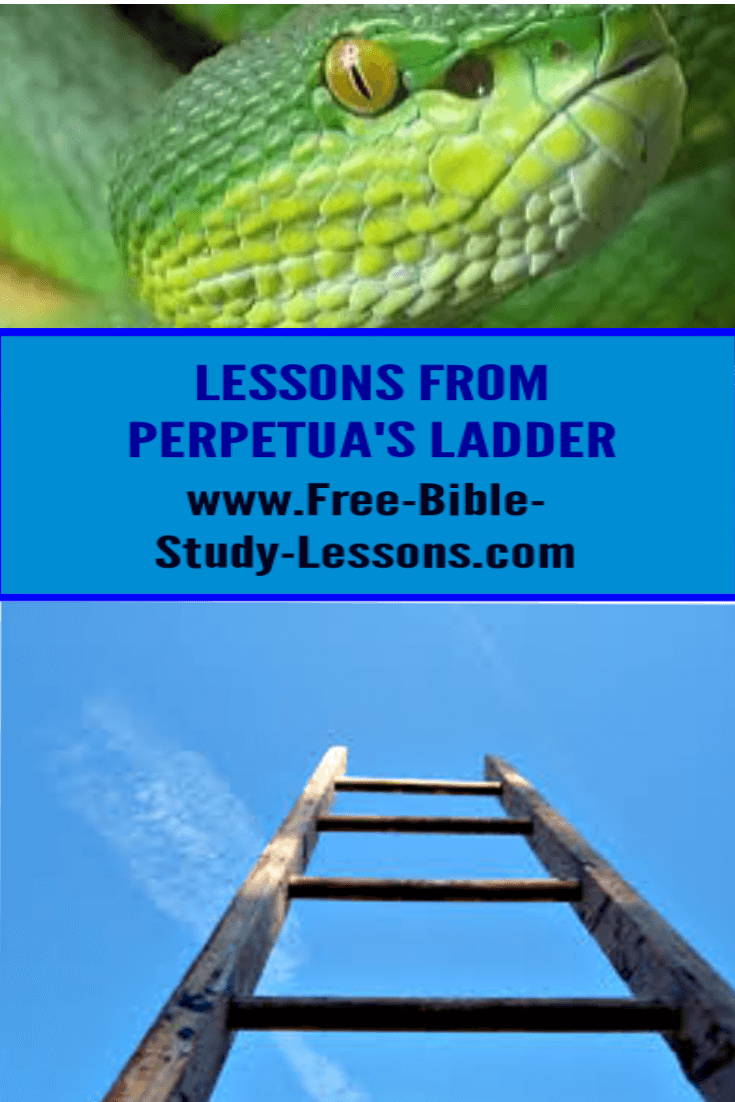 I beheld a ladder of bronze, marvelously great, reaching up to heaven; and it was narrow, so that not more than one might go up at one time. And in the sides of the ladder were planted all manner of things of iron. There were swords there, spears, hooks, and knives; so that if any that went up took not good heed or looked not upward, he would be torn and his flesh cling to the iron. And there was right at the ladder's foot a serpent lying, marvelously great, which lay in wait for those that would go up, and frightened them that they might not go up. Now Saturus went up first (who afterwards had of his own free will given up himself for oursakes, because it was he who had edified us; and when we were taken he had not been there). And he came to the ladder's head; and he turned and said: Perpetua, I await you; but see that serpent bite you not. And I said: it shall not hurt me, in the name of Jesus Christ. And from beneath the ladder, as though it feared me, it softly put forth its head; and as though I trod on the first step I trod on its head. And I went up, and I saw a very great space of garden, and in the midst a man sitting, white-headed, in shepherd's clothing, tall milking his sheep; and standing around in white were many thousands. And he raised his head and beheld me and said to me: Welcome, child. And he cried to me, and from the curd he had from the milk he gave me as it were a morsel; and I took it with joined hands and ate it up; and all that stood around said, Amen. And at the sound of that word I awoke, yet eating I know not what of sweet.

Perpetua understood this dream to mean that she would not be released, but would indeed suffer martyrdom.  And she was correct.

There are some lessons here for all of us.  Sometimes we have a casual attitude toward sin and our Christian faith.  It used to be called "greasy grace."  It was the idea that if we sin, no big deal, just ask Jesus to forgive and He will.  Now I know that when we sin, we do come to Jesus with genuine repentance and He forgives us.  But, if we have a careless attitude to sin, do we really have genuine repentance or are we just trying to "get the best of both worlds?"  One thing is for sure:  God is not fooled.

The above verse in Matthew [and other verses] show the seriousness of our actions and confessions in relationship to Christ.


Don’t look for shortcuts to God. The market is flooded with surefire, easygoing formulas for a successful life that can be practiced in your spare time. Don’t fall for that stuff, even though crowds of people do. The way to life—to God!—is vigorous and requires total attention. Matt. 7:13-14, The Message

Let's look at Perpetua's dream.  The ladder is narrow [choose the narrow way] and only one person can ascend at a time.  While we may have friends along the way, ultimately our Christian journey is between Jesus and us.  We have to rely on Jesus.

There is a great serpent [Satan] that wants to hinder us from faithfully following Christ.  His bite is painful or fatal.  If we attempt to defeat him in our own strength, we will feel his fangs and poison.  However, if we stand in faith in the Name of Jesus he cannot touch us or hinder us.  And as Christ stomped on his head, even so shall we.  In fact, he is afraid of the Christian who knows his place in Christ.

All the sharp iron tools and weapons on the ladder that Perpetua saw show us the care which must be given to the Christian life.  One careless move can mean a painful cut.  We dare not play with sin.  We dare not deny Christ with the sinful thought that we can always be forgiven later.  This is serious business, not self-centered indulgence.  It is interesting, if churches teach classes on doctrine few come, if they teach on how to improve your personal life the classes are full.  Many western Christians, at least, seem to care only how Christ can improve their lives...and then wonder why the world is being taken over by Islam and humanism.  They are wounded and bleeding from carelessly climbing the ladder and they don't even know it!  Will they make it to the top or will they fall to the serpent below?

At the end of the ladder, for those, like Perpetua, who climb carefully there is the reward of the presence of Jesus.  Jesus Himself welcomes them into the place of perfect beauty and rest where no pain can ever come.  The price Jesus paid in order to provide it for us is beyond human understanding.  The price we have to pay in order to successfully climb the ladder is great as well.  The price may be loss of family or friends, work, mockery, and even death itself.  But whatever the price of our cross, it must be paid.  This is not working for salvation, but proving the genuineness of our salvation out of love for the One Who gave it all.