Hell:
The Justice Of God

Hell is one of those words the devil loves to dilute in order to destroy it's meaning. Everyday people say things like: What the…, cold as…, hot as…, go to…, etc. Satan has succeed in removing the fear of it from many people. Some even say, "I want to go to hell because that's where all my friends are." Yet this place is to be feared. It is the unending torture chamber of the universe. Not only is it eternal, but also once a person is there there is no escape or release. They are there forever!

"But I will show you whom you should fear: Fear Him who, after He has killed, has power to cast into hell; yes, I say to you, fear Him!" Luke 12:5, NKJV

Notice, technically "hell" seems to refer to a holding prison until the final judgment when all the occupants will be cast into the "lake of fire." In modern usage "Hell" often refers to the lake of fire. I will use the term to include both since once a person enters this place of torment his eternal destiny is sealed.

Before we look at some of the details, let's consider an objection many people make. They will say things like, "How could a loving God sentence people to an eternal hell" or "If God made hell, then He cannot be a good God."

Why is this place of pain a necessity? Why would God make such a torture chamber?

God is an eternal being. He has no beginning and no ending [time itself is a creation of God].

"The eternal God is thy refuge, and underneath are the everlasting arms..." Deut. 33:27, KJV 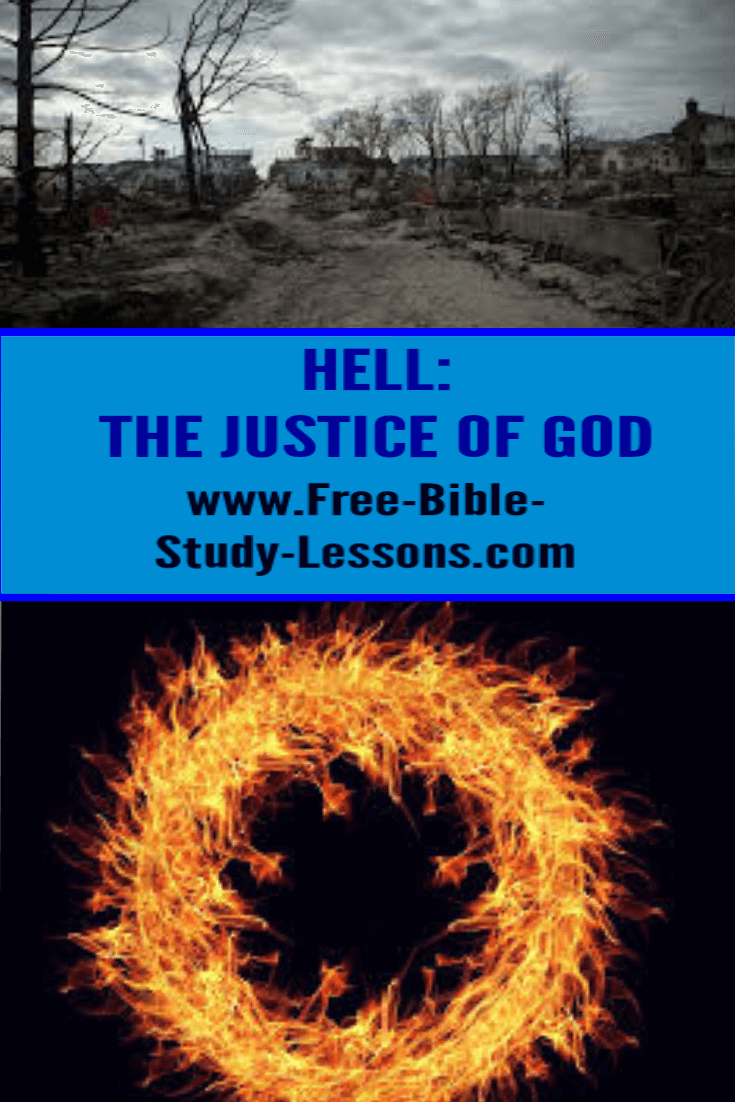 Satan led a rebellion against God. A number of angels [possibly one-third but we don't know for sure] followed him in his rebellion. Satan wanted to be God. He failed. Angels cannot be redeemed [we discuss the reason why in Covenants]. Once Satan and his followers rebelled they were locked into evil forever. They have no hope of salvation.

What was God ultimately going to do with these rebellious angels? Because of the eternal nature of God and the seeds of eternity He planted in His creation, God cannot simply cause them to cease to exist. Nor can He allow them to roam His universe forever wreaking their destruction on His perfect creation. The solution was to create a place where, at the Second Coming, they will be eternally imprisoned. Hell was not originally designed for human beings.

"For if God spared not the angels that sinned, but cast them down to hell, and delivered them into chains of darkness, to be reserved unto judgment..." 2 Peter 2:4

When Adam, as our representative, joined Satan's side in the rebellion against God, it became our punishment as well. We, too, will exist forever and God cannot allow evil human beings to rampage through His creation without control. The difference between angels and humans is that under certain conditions humans can be redeemed. They can switch sides from rebellion to submission to the Lordship of Jesus Christ.

Rebellion against God, called sin, has infected everyone and everything in creation. It is like a cancer which spreads and destroys everything it touches. Nobody is immune. In fact, we are all born already infected with sin. Hell is then the automatic destination of every human being. Only by a deliberate choice can that be changed.

This "lake of fire" represents the justice of God against rebellion. God feels the same [only much greater] anger against sin as we do against crime [which is one aspect of sin]. If we are a victim of crime or someone we know is murdered, raped, or otherwise abused, we feel the anger of the injustice. We want to see the perpetrator caught and punished. We also feel the injustice when the court system allows criminals escape with little or no punishment. Rebellious angels and humans murder and rape God's universe and God is outraged. Hell is the justly earned penalty for crimes against God - of which we are all guilty. No one will escape [Ps. 9:17].

To object to this eternal punishment is to object to justice. It is to say we want a world with no justice, where evil reigns without punishment. It is to say we want evil to run wild without any checks. This is foolishness. No one could live in such a world. It would self-destruct. God will not allow this to happen in His universe. At the Second Coming all sin and every being infected with sin will be removed to the lake of fire [Rev. 20:13-14]. The universe will then be restored to a perfect condition never again to infected with sin. With all evil beings limited to hell, the universe will again be a paradise.

So what is hell? What will it be like there?

"Every good gift and every perfect gift is from above, and cometh down from the Father of lights, with whom is no variableness, neither shadow of turning." James 1:17, KJV

- No excitement or adventure only an unending boredom.
- No fun only frustration.
- No fulfillment only emptiness.
- No love only seething hatred.
- No joy only misery, depression, tears, and weeping.
- No health only broken bodies which can never die.
- No pleasure only pain like being burned but never having any relief.
- No light only darkness and despair.
- No friends only the ache of loneliness.

Close your eyes and picture hell. The most terrible things which happen on this planet are only a small picture of what hell it like. It really is a place to be afraid of - not just a catch phrase.

God can only do perfection. Hell is the perfect expression of the justice of God. It is punishment taken to its ultimate and it is unending. Not only is it forever, there is no escape, no relief. Once there it is the end of the story. If we really understood the lake of fire we would not want even our worse enemies to go there.

Some people have the misconception of Satan ruling in hell. It is just as much a punishment for him as for anyone else. There are no rulers in hell. Everyone - former angels [demons] and humans - scream in terror, loneliness, and hopelessness.

How To Avoid Hell

There is only one way to escape being sentenced to hell. And it MUST happen in this life before death or it will be too late.

We will have God's mercy or God's justice. There are no other choices. As mention above, when Adam sinned on our behalf [and every time we sin we agree that he made the right choice] we became rebels against the good and perfect God.  God, in perfect justice, could have washed His hands of the whole mess and condemned us all to hell.

God, being perfect, cannot deny justice. For the crime of rebellion the punishment must be paid. There is no other choice. The only way to have mercy on the guilty is for an innocent person to voluntarily choose to take their punishment. Justice is then satisfied. A crime has been committed, the penalty has been paid.

"For the wages is death; but the gift of God is eternal life through Jesus Christ our Lord."

Now we come to a big problem. There are no innocent people. All of us are infected with the sin cancer. The only possible answer was for God Himself to become a true human being, live a perfect life, and then voluntarily take the punishment for us. This is exactly what happened in Jesus Christ. Since He is God, Who has more value than all of His creation, He could take the penalty for everyone. However, He will not force Himself on us. We must accept His sacrifice on our behalf AND then we must end our rebellion by repenting and totally submitting to His Lordship.

"Whoever believes in the Son has eternal life, but whoever rejects the Son will not see life, for God’s wrath remains on him.” John 3:36, NIV

"That is why whoever accepts and trusts the Son gets in on everything, life complete and forever! And that is also why the person who avoids and distrusts the Son is in the dark and doesn't see life. All he experiences of God is darkness, and an angry darkness at that." John 3:36, The Message

"That if you confess with your mouth, “Jesus is Lord,” and believe in your heart that God raised him from the dead, you will be saved." Rom. 10:9, NIV

"It is the secret of faith, which is the burden of our preaching, and it says, in effect, “If you openly admit by your own mouth that Jesus Christ is the Lord, and if you believe in your own heart that God raised him from the dead, you will be saved.” For it is believing in the heart that makes a man righteous before God, and it is stating his belief by his own mouth that confirms his salvation. And the scripture says: ‘Whoever believes on him will not be put to shame’." Rom. 10:8-11, Phillips

For more information take our short e-mail course, Reality Check, and/or read the report called An Introduction to Life.

This is the most important thing you will ever do. Don't take it lightly or put it off.