The temptation of Eve was Satan't first attack on humanity, although she was not his end goal.  In order to weak havoc on God's creation, Satan had to get Adam, who was the representative of humanity [Federal Head], to rebel against God.  Satan know his chances of success were next to nothing if he tried to tempt Adam directly.  He had to manipulate a situation where Adam was forced to choose between two people he loved and hope he made the "right" decision.  So the temptation of Eve was part of a greater strategy.

Now Eve was no easy target either.  She was incredibly intelligent - using her brain to 100% capacity.  She had no sin nature which meant her natural desire would be toward loving God and obeying Him.  In God’s command to subdue the earth [Gen. 1:28] was a hint that there was going to be opposition that needed to be subdued, so Eve could have been aware that there was an enemy somewhere around.  All of this worked against Satan in the temptation of Eve.  Eve [and Adam] had every advantage to make the right choice.  [By the way, the apple of temptation may not have been an apple.  The Bible just says it was a fruit.]

In coming at Eve, Satan had to be subtle and deceptive.  The temptation of Eve shows us the steps of temptation that he often tries on us.  Satan is not very creative, he sticks with what works. 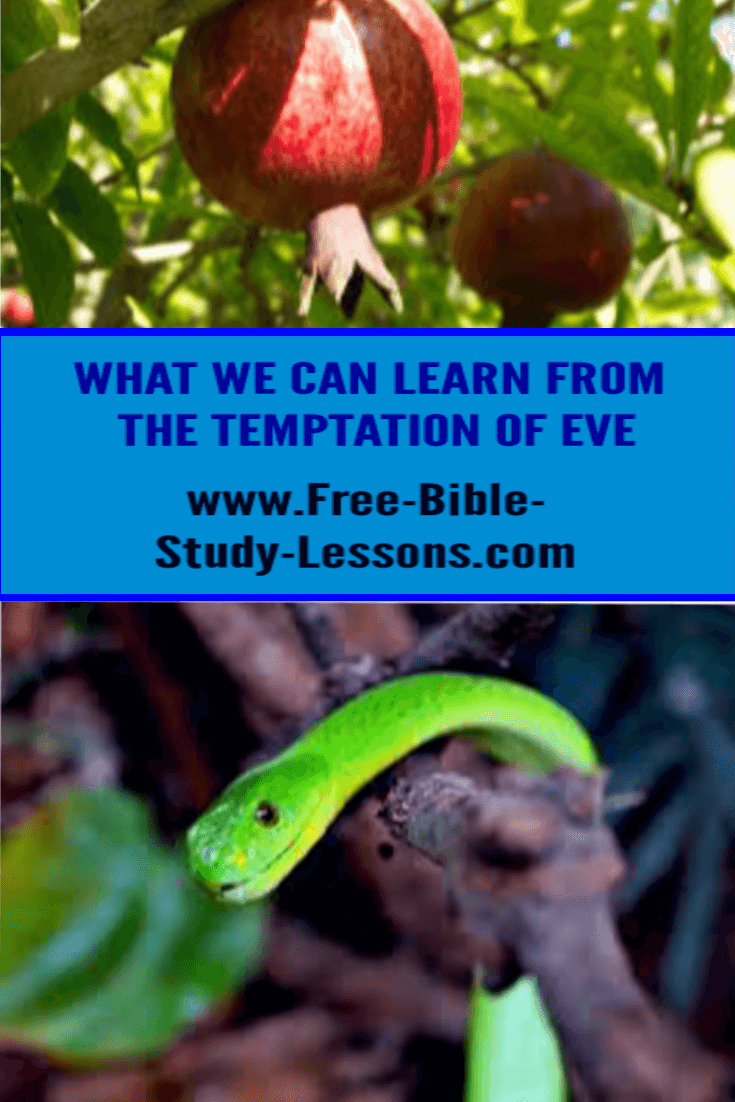 1.  Satan took advantage of an opportunity.  For some reason Eve was in the vicinity of the forbidden tree.  She had no desire to or intention of disobeying God.  Maybe she was curious, maybe she was just out with a walk with Adam or maybe she had work in the neighbourhood.  Whatever the reason, Satan was ready.  Remember, he had to work fast before Adam and Eve had an opportunity to really become established in their relationship with God - probably this was Day 7 or early on Day 8.

In our own lives, Satan may try to move us into a place where he can tempt us, but often he is simply taking advantage of a situation that we have willing entered into.  [Of course, when I say Satan tempts us I don’t mean that Satan is personally doing it as he did with Eve.  Satan is only one being so the likelihood of getting his personal attention is very small.  He does; however, have helpers - including our own now corrupted desires and nature!]

2.  Satan did not appear as a horned man in red pyjamas.  He came through the body of something that was still part of God’s “very good” creation.  A snake was a natural creature.  At this point in time, it did not excite fear or repulsion.  Eve had probably seen it before [and Adam had named it].  Some have wondered why in the temptation of Eve she did not seem surprised at the snake speaking.  If I am right and this was Day 7 or 8, Eve was discovering new things all the time.  A talking snake may have just seemed one more of God’s wonders.

We need to be on the alert for possible dangers.  We need to be aware of our weak points and be as pro-active as we can in avoiding people, places or situations who may place us in danger of falling.

3.  Next Satan asked a question.  “Did God really say…  Are you sure you heard right?  God couldn’t really have meant that, could He?”  It was a question designed to implant a seed of doubt in the goodness of God.  “Are you serious?  God really said that?”

Satan likes to get us to question God’s goodness.  If God really loved you He would not have allowed this or that to happened.  He would have protected you.  He would have…  Being human and seeing only part of the picture, we don’t understand why God allows some things to happen.  To us they are hurtful and painful.  Yet even though God is engaged in a war with a brutal enemy, He guarantees that in the end everything will work out to the benefit of those who love Him.  Sometimes it tries our faith, but we must hold on to that fact.

4.  Consider the question, “…ye shall not eat of every tree of the garden?” [KJV]  Satan knew perfectly well what God had said.  He knew it was only one tree in the entire Garden [or planet for that matter] that was forbidden.  But he asked if God had forbidden them to eat from “every” tree.  Along with implanting doubts as to God’s goodness, He wanted Eve to think that God was harsh or unfair.

Teenagers often pick up on this tactic with their parents:  “Why can’t I go there or do that?  All my friends are…everybody will think I’m weird if you don’t let me…that’s not fair…”  The idea is that God is mean or unreasonable.  Satan wants us to think of God that way, because then we are easy prey for temptation.

5.  Eve answered Satan.  She corrected his “mistake.”  It was only one tree, but Eve betrayed her thought that perhaps God wasn’t being fair.  She add to the words of God - she said that God had said they could not even touch the fruit.  That was certainly wise advise, but it was not what God had said.  If she had said, “God said not to eat it so I am not even going to touch it” that would have been great.  But putting words in God’s mouth is never a good idea.  And Satan had scored another point - He had got her talking.  Satan is the master liar and manipulator.  As long as he is not being ignored, he can turn and twist just about anything.

Looking in hindsight, Eve should never have allowed herself to be drawn into a conversation with the serpent.  She was defending God’s Word. She was standing for what was right and even going beyond it.  She should have ignored the serpent and moved away or, at least, stepped back and let Adam handle it.  In all fairness to Eve, she had no examples or patterns to follow.  The Bible is plain, Eve was deceived, i.e. she thought she was doing the right thing [1 Tim. 2:14].  But being deceived is not an excuse for failure.

We are to be submitted to God and resist the devil and he will flee [James 4:7].  We are not to enter into conversations and debates with him.  He has been around since the beginning of time.  He knows a lot more than we do.  It is simply pride to think we can best him.  It is by resisting him in Christ that we can stand.  Anything else is doomed to failure. 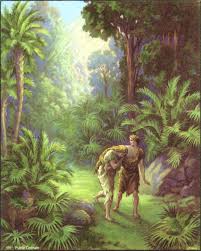 6.  Now that Satan had implanted questions and doubts in the temptation of Eve, he was ready to move to direct contradiction of the Word of God.  God had said that disobedience had a consequence - death.  Satan presented the idea that sin brings great benefits and has no bad consequences.  “You will not die, but you will gain knowledge and be as wise as God!”

This great deception [that we can sin without consequences] is the dream of humanist society.  We can see this in the sexual revolution and perversions that are growing and being accepted by society at large today.  We see this in the humanist criminal “justice” system which makes the violators the real “victims.”  We see this in the fact that people do not want to believe in Hell.  Everywhere the world declares “Do what you want.  You will be happy and accepted and there are no consequences.”  It is lie that we want to hear but, as Adam and Eve discovered, there are consequences.  Broken lives and nations all around us testify to that.  Satan can only keep up his illusions going for so long and then the fantasy bubble bursts.  If people do not accept the Truth and turn to the Solution before death, then the horrors of Hell are an eternal consequence.

Satan had now done his job.  He could watch as Eve allowed his words to poison her mind knowing the inevitable result.

We can never defeat Satan on our own.  We are born into a world of illusion with our eyes already deceived and our nature driving us away from God and deeper into lies and fantasy.  If we are to come to Truth and find real freedom and purpose in life we must come to Jesus Christ.  We submit to Him first and Lord and Saviour and then, through the power of the Holy Spirit, begin learning and implementing all that Christ has provided for us.  It is a lifetime project, but it is the only way into Truth and Reality.