You Cannot Be
My Disciple

“Simply put, if you’re not willing to take what is dearest to you, whether plans or people, and kiss it good-bye, you can’t be my disciple.  Luke 14:33, The Message

Wait a minute, Jesus.  That’s not very user-friendly!  Don’t You know You are supposed to build relationships, not push people away?

We must consider to whom Jesus said this and why.  As every Feed Yourself student knows, always look for context.  Jesus was walking with His disciples, and a large crowd was following them.  Right after this, Jesus told the parables of the Lost Sheep, Lost Coin and Lost Son.  We know He was very concerned about reaching the Lost.

Jesus was popular at this time in His life.  People saw the miracles, He was an interesting speaker that related to everyday life and some probably admired the way He stood up to the Pharisees and other authority figures. 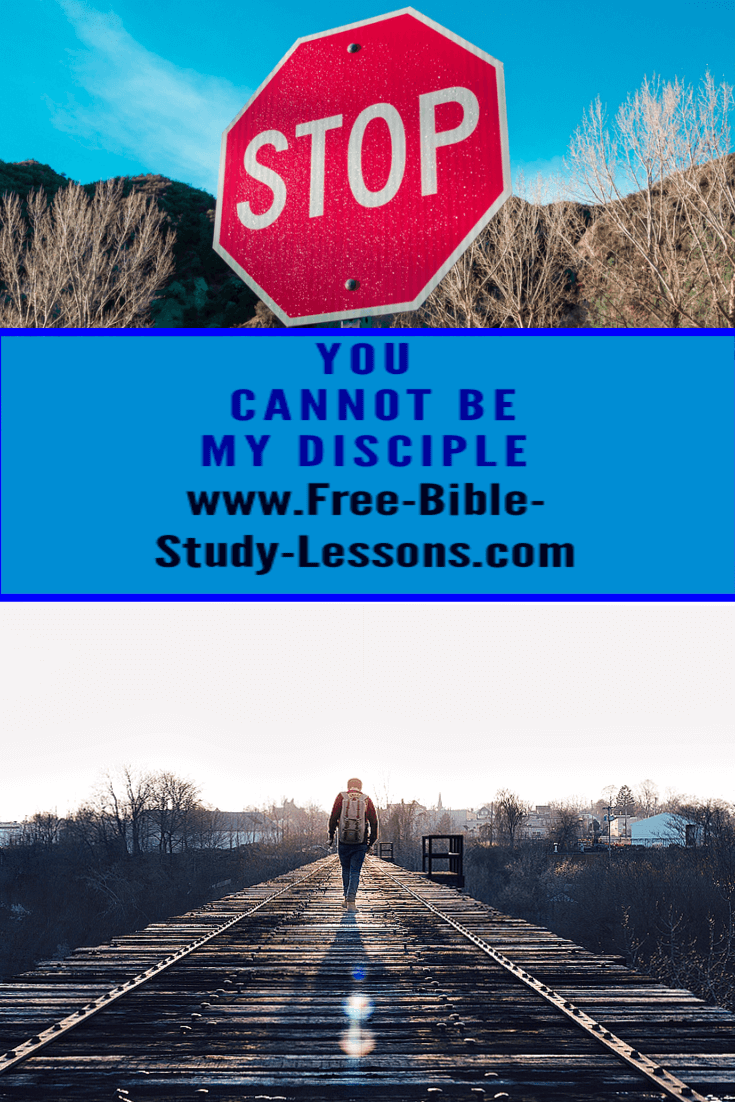 Like most movements, the followers of Jesus started small with a dedicated group, but as they became popular and successful, all kinds of people joined them with their own agendas and interests.  We see this after the feeding of the 5,000 where the crowd wanted to force Jesus to become a king - regardless of His personal desire [John 6:15].

Part of the problem of the church today is that it has taken the world’s definition of success: crowds, power and money.  Jesus did not focus on those three things.  He focused on doing the will of God.  When we set our goals according to the world’s standard - even if our intentions are good - we will end up compromising the gospel.  In my opinion, the theistic evolutionists are an example of this.  In trying to win souls or avoid persecution, they compromise the Word of God to make it acceptable to the world.  Interestingly, that both the Nazis under Hitler and the Chinese communists produced a heavily edited version of the Bible, trying to benefit by making the Bible fit their causes.  People, organizations and movements continually try to bend the Words of Jesus to fit their vision.

It is essential to realize that Jesus never turned anyone away who came to Him.  Everyone looking for Truth was welcome in His presence, including children, women, prostitutes, tax collectors and even Pharisees like Nicodemus.  But He did not compromise the Truth to draw them or keep them.  He sometimes said some very blunt things, like the “you cannot be My disciple” statement above.  The crowds and those who followed Him had to realize that they could not bend Him to their purposes.  They had to submit to His purposes.  This cost Jesus many followers, which, I’m sure, saddened His heart.  Still, there was no compromise, and people had the right to know the facts and make their own decisions.

When we focus on crowds, power or money we will be tempted to use manipulation and emotional appeals to draw people.  Jesus never did.  He laid out the facts, not only the benefits but also the costs.

When our focus on evangelism is because we want crowds, power or money - even with the best motives, we should not be surprised when people ‘deconvert’ and leave the church or are weak with compromised spiritual immune systems - i.e. they are susceptible to living like the world in many areas of their lives.  In many cases, it is not their fault.  They were either not given what they needed to make an informed decision or they were not trained in their new faith after making a decision.  The early church of the first few centuries required members to attend weekly Bible training for three years before they were baptized.  Personally, I disagree with that as I feel a person should be baptized quickly; nevertheless, it shows the importance of training for new converts.

I want to balance this out because I know there will be doom and gloomers who say, “narrow is the gate and few find it,” things are getting worse and worse.  If you have read very many of my teachings, especially on the end times, you will know that is not my position.  Yes, Jesus did say the gate was narrow, but that also has to be considered in context.

As we follow Jesus’ instructions to make disciples without compromise and manipulation, we will have a strong church.  The Kingdom of God is destined to expand until it fills the earth with the glory and knowledge of God.  This does mean that there will be crowds, which will lead to power and influence, which will also lead to abundance finances.  Crowds, power and money should become a normal by-product of Christianity, not the goal.  The goal is loving and obeying God while making disciples.  When we get the goal and the by-product mixed up or if we become afraid of losing them, then we are in trouble.

There are and will be times of intense persecution in history and in parts of the world.  This is to be expected as the kingdom of darkness rages against its ultimate destruction.  But in the big picture of things, the church, through the Power of the Holy Spirit, will always move forward, and the Kingdom of God will always expand.  And we do not have to compromise or manipulate for that to happen.  If we do compromise or manipulate, we are actually hindering the growth of the true church, although it may appear to be growing on the surface.