What is the Deadly Sin?  Often when we think of sins, we think either of big sins like murder, assault and robbery or of sins which plague us personally like, perhaps, lying, cheating, lust, etc.

The fact is there is only one deadly sin, only one sin that leads to death both now and in eternity.  This sin is hideous, yet many fail to recognize it.  It is like a killer shark lurking unseen below the surface of a calm ocean.  Everything seems to be going great.  Life is good.  Fun times are in full swing.  Then, without warning, it strikes bringing death and devastation in its wake. 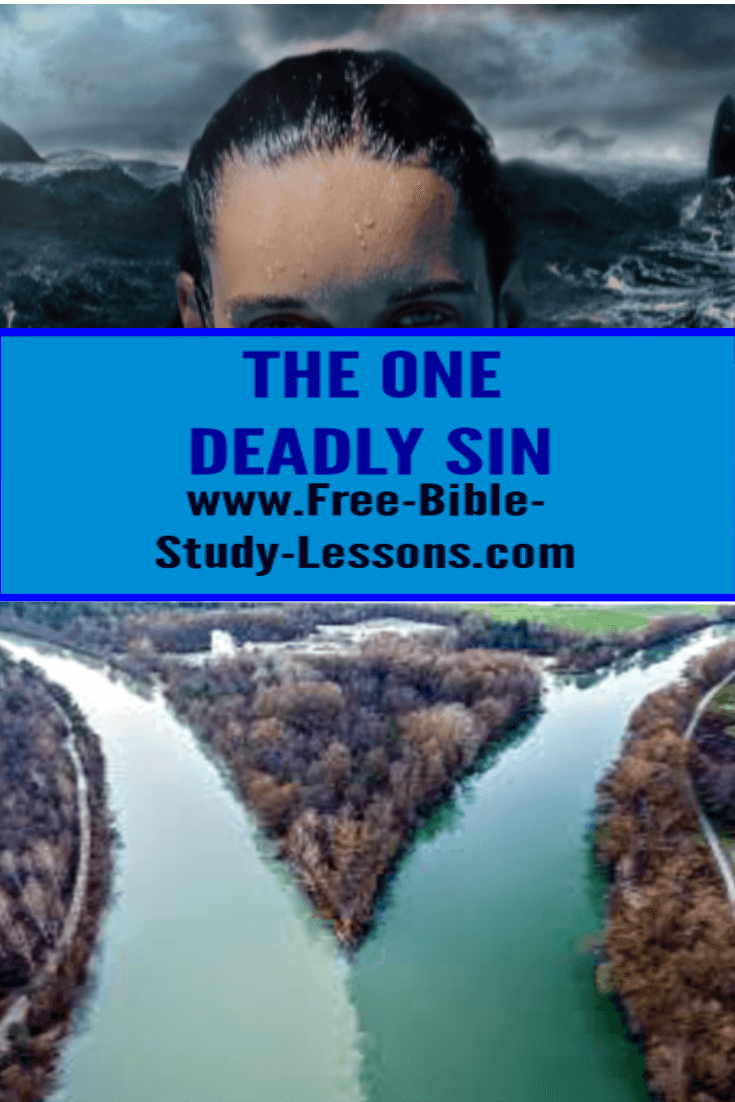 If there is only one deadly sin, what about all the other sins that others, as well as ourselves, commit?  Don’t they bring death and destruction in their wake?  Don’t they ruin lives, destroy families and plunge civilizations into darkness?  The answer is both yes and no.

Picture this one deadly sin as a great river flowing down to the ocean of death.  All these other sins are rivers and streams of various sizes branching off from the main river.  Yes, they also flow to the ocean of death and so they bring destruction in their wake.  However, if the source were cut off, they would dry up and be powerless by themselves.  So while we can, and must, deal with the various streams flowing off of the main river all we can really do about them is either dam them up and so reduce their flow [impact] or channel them into other streams.  The only way to stop them completely is to deal with the Source.

Let’s give an example, say Ralph is given to fits of rage expressed through profanity.  This is a destructive stream which will ruin relationships and ultimately destroy one or more lives.  Ralph sees the destructiveness of his actions and decides he is going to master this sin before it totally ruins everything he has.  With great self-effort he manages to control his words and actions.  He turns his rage inward.  He has rechannelled his stream and is a much more pleasant person to be around, but the inward rage takes an emotional toll resulting in health issues.  This stream is still bringing destruction, just in a different direction.

Continuing on, Ralph recognizes his problem with rage - whether outward or inward.  He goes to counselling and discovers the root cause of his outbursts of anger.  He then works on dealing with it and finds over time that he is no longer an angry person.  Has he solved his problem?  He has solved the rage problem and dammed up this stream.  But because the source water is still flowing it will branch out into other destructive rivers and streams, perhaps arrogance, greed, jealousy, lust or a million other expressions of death.

What Is This One Deadly Sin That Is The Source Of All Sins?

There is only one ultimate River Source whose waters flow through this world: the River of Life.  The River of Life flows from the heart of God through its Source of love as it moves to the ocean of Fulness Of Life.  It also has rivers and streams that bring health, joy and peace to all they touch.  True, sometimes these branch streams become separated from the Source River and turn into bogs and marshes, but that is not the fault of the Source.

Then the angel showed me the river of the water of life, as clear as crystal, flowing from the throne of God and of the Lamb down the middle of the great street of the city. On each side of the river stood the tree of life, bearing twelve crops of fruit, yielding its fruit every month. And the leaves of the tree are for the healing of the nations.  No longer will there be any curse.  Rev. 22:1-3, NIV

And so we know and rely on the love God has for us. God is love. Whoever lives in love lives in God, and God in them. 1 John 4:16, NIV

What happened is that Satan gave into this one Deadly Sin and so channelled a portion of the River of Life into a different direction heading for a different destination.  There is no such thing as original evil.  Evil is simply something good that has been perverted and twisted from its original purpose into something that is harmful and destructive.  When Adam. as the representative of humanity, followed Satan in committing this deadly sin, he put all of humanity onto this powerful but side river heading to the ocean of death.  All the other sins that have ever been committed or will ever be committed come from this one perverted river.

The only way to get back into the main stream of the River of Life is by confessing and forsaking this deadly sin.  So what is this one evil that we have all committed that leads to all the evil, sickness, pain, suffering and death in this world?  What was it that Satan and Adam both did…and that we do every day?  It is pridefully seeking independence from God.  All humanity marches haughtily in this original Pride Parade leaving shattered lives and destruction in its wake.

In order to get back on the course of the River of Life, we must humbly come to the Lord Jesus Christ, admit our independence and rebellion, accept His sacrifice on our behalf and offer of amnesty, and submit to His total leadership in our lives.  This is not a fearful dictatorship, but an entrance into true freedom for this is how we were designed to operate.  It is the satisfying finding of unconditional acceptance and love as well meaningful purpose in life.

You’re cheating on God. If all you want is your own way, flirting with the world every chance you get, you end up enemies of God and his way. And do you suppose God doesn’t care? The proverb has it that “he’s a fiercely jealous lover.” And what he gives in love is far better than anything else you’ll find. It’s common knowledge that “God goes against the willful proud; God gives grace to the willing humble.”

So let God work his will in you. Yell a loud no to the Devil and watch him scamper. Say a quiet yes to God and he’ll be there in no time. Quit dabbling in sin. Purify your inner life. Quit playing the field. Hit bottom, and cry your eyes out. The fun and games are over. Get serious, really serious. Get down on your knees before the Master; it’s the only way you’ll get on your feet.  James 4:5-10, Message