Why is the date of Revelation's writing dangerous? While dating books of the Bible is important, in most cases it does not change how we understand the meaning of the Book. Take Genesis for example. When Genesis was written - during the lifetime of Moses - is important for establishing the creditability of the book. It even helps to establish the creditability of Jesus Who taught that Moses wrote it. However, we can understand what the author meant by what he wrote - whether we agree or not - without having conformation of the writing date. In other words, the date, while important, doesn't change how we understand what the author wrote. Most Bible books are like that.

The Book of Revelation is an exception. If we do not start with the right date of Revelation, we will misunderstand and misapply most of what Jesus is saying through John. Let me illustrate. Let's say you find a letter by a respected Biblical modern-day prophet. In this letter he predicts a terrorist attack on New York. If you look at the date on the letter and it states Feb. 7, 1997, you would believe he predicted the twin towers attack. If, on the other hand, you look at the date and it states Feb. 7, 2005, you would wonder what was going to happen next. The letter is the same, what made the difference? The letter is obviously predictive prophecy. That being the case, it cannot refer to an event that has already happened. It must refer to an event future to when the letter was written. The 1997 date does not prove the letter refers to the twin towers, but it certainly makes it a strong possibility. The later date removes the twin towers from even being a possibility.

What difference does it make? Revelation is obviously predictive prophecy. If it was written in Nero's reign, then the majority of the book could be predicting the Jewish War and the first massive, cruel Roman persecution of the church. If the date of Revelation's writing was in Domitian's reign, it could not refer to these events which ended in AD 70. Then the Book of Revelation might apply to events of world history - down through time, in our time, or even in our future.

Revelation has been the subject of controversy almost from the beginning of church history. Down through the ages reliable, God-loving, and scholarly people have been divided on the date of Revelation. For any "side" to claim that everyone of importance agrees or has agreed with their position is just plain false.

Internal Evidence For The
Date Of Revelation 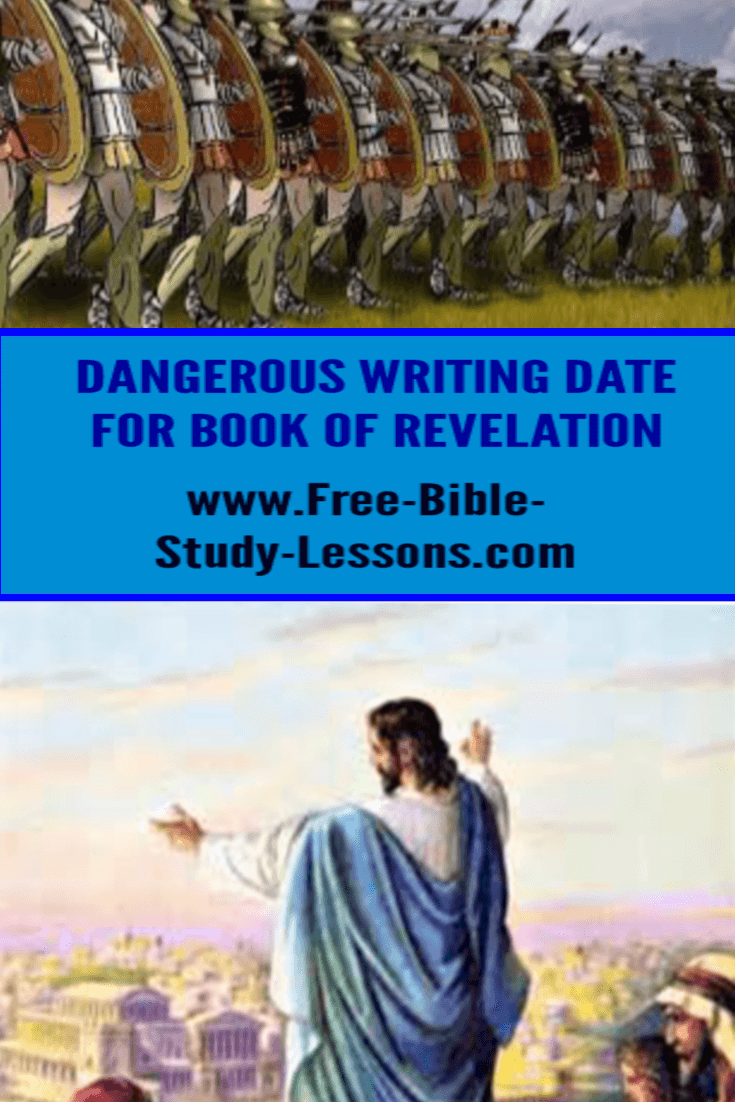 So let us begin to look at the internal evidence. I trust you to consider the evidence with an open mind.

John states the Book of Revelation is written to the seven churches of Asia. Never once did he say that any part of it was not for them. This means that the entire book must have been relevant to the First Century churches of Asia. Many of the theories of Revelation today would have meant nothing to them or to the majority of Christians in history.

2. "And there was given me a reed like unto a rod: and the angel stood, saying, Rise, and measure the temple of God, and the altar, and them that worship therein." [Rev. 11:1]

3. "Here is wisdom. Let him that hath understanding count the number of the beast: for it is the number of a man; and his number is Six hundred threescore and six." [Rev. 13:18]

Remember the Book of Revelation is addressed to the seven churches of Asia. Here John clearly expects them to be able to figure out who the beast is. This means that the beast must have been someone they knew. There is no one in Domitian's reign who fits the description of the beast. However, Nero fits it very well - see Who Is The Beast Of Revelation?

4. "The Revelation of Jesus Christ, which God gave unto him, to shew unto his servants things which must shortly come to pass..." [Rev. 1:1]

"And he said unto me, These sayings are faithful and true: and the Lord God of the holy prophets sent his angel to shew unto his servants the things which must shortly be done." [Rev. 22:6]

John surrounds the entire book of Revelation with a sense of urgency. In both the beginning and ending of Revelation, John tells his original readers that the events prophesied were going to happen quickly - in other words, to them. This sense of urgency is totally unnecessary if the majority of the events of Revelation were not to take place for 2,000+ years. If the events predicted refer to the Jewish War and Nero, then they would happen very quickly indeed. Either John told them the truth or he deceived them as to the time of the prophecy.

John clearly states that the sixth king is reigning as he is writing the Book of Revelation. The date of Revelation must fall within the reign of the sixth king. Who are the first five kings who have died before Revelation was written? Julius, Augustus, Tiberius, Caligula, Claudius. Who is the sixth king in this line? Nero. Who was the seventh? Galba, who reigned for nine months - a short space. Everything fits naturally, why try to force a different meaning into plain Scripture?

Daniel, who saw in visions events that were future to his time, was told to seal his book because it was not for his time. If John was also seeing events that were not for his time, he, too, would have been told to seal the Book of Revelation. As you can plainly see, John was told NOT to seal his book because "the time is at hand." This means the events foretold would happen quickly from John's point-of-view. Again, there is nothing in the reign of Domitian which would fit these prophecies.

7. "I know thy works, and tribulation, and poverty, (but thou art rich) and I know the blasphemy of them which say they are Jews, and are not, but are the synagogue of Satan." [Rev. 2:9]

These verses strongly indicate that, in at least two of the churches of Revelation, the Jews were a major force of persecution. We can see this through the book of Acts, as well. This points to the fact that the date of Revelation must be when the Jews were still powerful. In AD 70 the nation of Israel was totally destroyed and the majority of the survivors were sold as slaves. After AD 70 they were in no position to persecute anyone; therefore, the date of Revelation must be before AD 70. 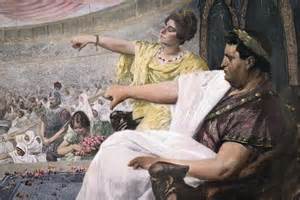 8. "I John, who also am your brother, and companion in tribulation, and in the kingdom and patience of Jesus Christ, was in the isle that is called Patmos, for the word of God, and for the testimony of Jesus Christ." [Rev. 1:9]

The Book of Revelation had to be written either in the time of Nero [AD 54-68] or in the last part of Domitian's reign [AD 91-96]. We know Jesus was about 33 1/2 years old when He was crucified in AD 30. If we give the late date advocates the benefit of the doubt and assume that John was only 20 when Jesus died in AD 30, John would be in his late fifties if he wrote Revelation in Nero's time or in his eighties in Domitian's time.

It is unlikely that the Romans would have sentenced an eighty plus year old man to hard labour on Patmos. Also, church history states that John lived and did a lot of work after he was released from Patmos. This is more likely if he was a younger man.

I believe the above verses show, from Scripture itself, that the Book of Revelation must have been written before AD 70. Anyone who wants to establish a late date of Revelation must answer these points using Scripture in context and without assuming things [i.e. gaps, stopped clocks, etc.] that are not in Scripture.

Let us look at a couple of external points for an early date of Revelation.

1. The First Century Church was about to face the first large persecution as well as see the once-loved nation of Israel destroyed. They needed encouragement in this dark hour. They needed to know the Church could survive. If John was writing to our time in the Twenty-First Century then his words would have been irrelevant to his original readers. It would not have given them the instruction and encouragement they desperately needed. More than that, it would have mocked or made light of their current situation. I don't think John would do that. The Word of God must always be relevant to the original readers.

2. As you read the Book of Revelation, you will see that John often uses the present tense in his writing. This means it was applicable to the people reading it.

3. Ancient Christian writers tell us of a persecution under Domitian, but there is no secular record of it. There is no doubt that some Christians were killed under Domitian, but it may not have been because they were Christians. It may have been simply part of Domitian's effort to stamp out all opposition. In the case of Nero, both Christian and secular writers mention his deliberate attempt to destroy Christianity. Of the two, Nero was by far the most vicious. He best fits the descriptions given in Revelation.

In closing I would like to look at the key witness for a late date of Revelation. His name is Irenaeus and he lived from AD 120-202. He was a disciple of Polycarp. It is believed that Polycarp was personally a disciple of John. Living so close to the time of the apostles makes him a powerful witness of the date of Revelation. Ireneaus made the following statement as translated into English:

"We will not, however, incur the risk of pronouncing positively as to the name of Antichrist; for it if were necessary that his name should be distinctly revealed in this present time, it would have been announced by him who beheld the apocalyptic vision. For that was seen no very long time since, but almost in our own day, towards the end of Domitian's reign." [ANF 1:559-560, quoted in Before Jerusalem Fell. pg. 47]

Those who study the original languages tell us that it is impossible to know for sure if Irenaeus meant that "the visions of Revelation were seen almost in our own time..." [late date] OR that "John, who wrote Revelation, was seen almost in our time..." Irenaeus' value as a late date witness is questionable since we don't know which meaning he had in mind. In any case, his statement cannot overthrow the internal evidence of Scripture itself.

For a very detailed look at the subject of the date of Revelation see Before Jerusalem Fell.