The Purpose Of Israel
In The Bible

Popular "End Times" teaching of today makes the purpose of Israel to be God's special people for time and eternity. Although it may be unintentional, Jesus Christ is often placed behind the Jews in the purposes of God. Israel becomes the center of all the working of God. Is that what God intended? Genuine thinking Christians know that Jesus Christ comes behind no one and any doctrine which would attempt to steal His glory is highly suspect.

Let's put things into perspective for a moment. The earth has been around for about 6,000 years. It was about 2,000 years from the creation of the world until Abraham was born. During that time God made 3 universal covenants [i.e. made with all of mankind - see The Love Covenants]. With Abraham God first limited his covenant scope. It was approximately 500 years later that Israel became a nation at Sinai. About 1600 years after that the Romans ended the nation of Israel in AD 70. It is safe to say that the majority of human history has been without the nation of Israel. Is the purpose of Israel really to be the center of history or were they simply given an important role in the plan for Someone else Who is the Center of all things? 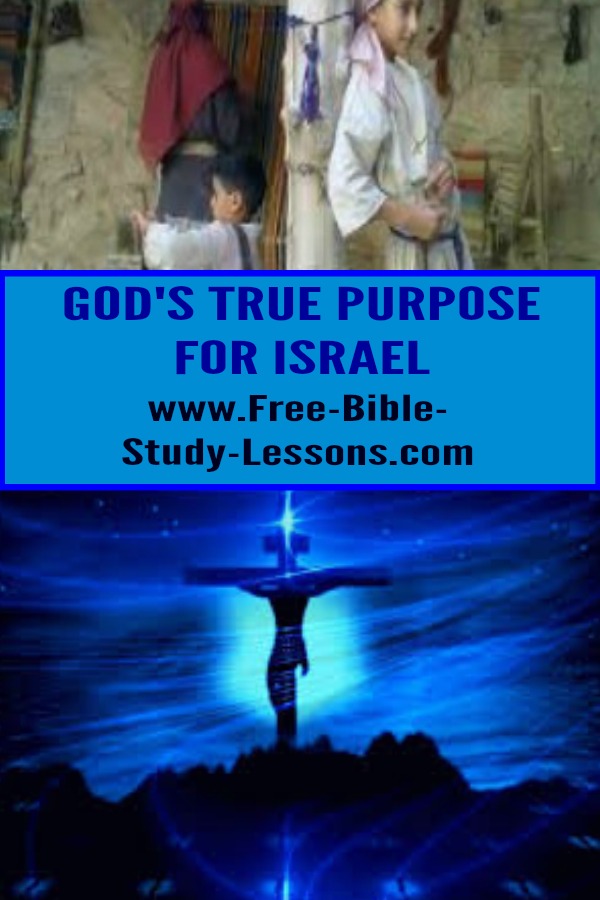 Before we look at what the purpose of Israel was and why they were chosen, let's look at three things that did not influence God to choose them.

First, God did not select the nation of Israel because they were a great nation or civilization. The Egyptians, the Chinese, and others had great civilizations. The Hebrews were hardly noticeable. They were nomads who became slaves before God called them.

"The LORD did not set His love on you nor choose you because you were more in number than any other people, for you were the least of all peoples;" Deut. 7:7

Second, God did not select the Israelites because they were better than anyone else. It wasn't that they sought after God. Even Abraham was an idol worshiper before God introduced Himself. Throughout their history they engaged in every kind of evil including, at times, child sacrifice. [Much like parents today who take their unborn children to hired killers to be murdered.]

Third, God did not select them because He knew they would be an obedient and submissive people. Anyone who reads the Old Testament knows that is not the case!

“You stiff-necked and uncircumcised in heart and ears! You always resist the Holy Spirit; as your fathers did, so do you. Which of the prophets did your fathers not persecute? And they killed those who foretold the coming of the Just One, of whom you now have become the betrayers and murderers, who have received the law by the direction of angels and have not kept it.” Acts 7:51-53

One thing we can learn from the above is that no man - or nation - can ever earn anything from God because of who they are or what they do. To try to relate to God on the basis of works is to court judgment and death. Everything we have comes by the grace of God alone without any glory going to man. The purpose of Israel was not to bring glory to themselves.

Back To The Garden 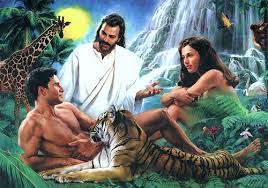 So what was the purpose of Israel?

To answer that we have to travel all the way back to the Garden of Eden. God created mankind to have fellowship with Him. It was to be a beautiful relationship. When Adam choose to rebel against God that relationship was broken. God did not need man and could have ended things right there. But, in love and grace, God had planned a way to restore that relationship. Adam, as man's perfect representative, had chosen the path of rebellion. In order for relationship to be restored a perfect truly human representative would have to chose the path of submission and obedience. In addition, for anyone to accept this new representative the guilt of their past rebellion would have to be paid for. Wow, what a tall order! In The Love Covenants we trace God working out His plan step-by-step.

What does this have to do with the purpose of Israel?

As part of this unfolding plan, God choose Abraham and made a covenant with him. God promised Abraham:

"I will bless those who bless you, and whoever curses you I will curse; and all peoples on earth will be blessed through you.” Gen. 12:3

Notice very carefully that it was not God's intention to simply create one nation that He would choose to love. No, God wanted all the nations to be blessed. Abraham and his descendants would be the channel through which God could pour out His blessing on all people groups. God never intended to limit his attention or blessing to one group. Because of the plan of salvation, it was necessary for a limited period of time.

The purpose of Israel in the Old Testament was two-fold.

First, they were to represent God to the nations and to intercede on behalf of the nations.

"...they [Israel] were also commanded to sacrifice 70 bullocks during the feast [Num. 29:12-38]. Why? Because the number of the original nations of the earth was 70 [they are listed in Gen. 10], and the feast celebrated the ingathering of all nations into God's Kingdom; thus atonement was made for all." David Chiltion, Paradise Restored, pg. 45

They were designed in the Old Testament period to be a nation of priests to represent the other nations and make intercession for them until the Messiah would come and open the way for all. One can only wonder how world history would have been impacted if a true vision of the purpose of Israel had been caught by the Jews of that time.

"Now if you obey me fully and keep my covenant, then out of all nations you will be my treasured possession. Although the whole earth is mine, you will be for me a kingdom of priests and a holy nation.’ These are the words you are to speak to the Israelites.” Ex. 19:5-6

Main Purpose Of Israel:
The Womb

The second, and far more important, purpose of Israel related to the Messiah. The Messiah was to be God as a real human being. He had to have traceable and verifiable roots. He could not just "magically" appear. There had to be real history, real people. To look at it this way, the purpose of Israel was to be womb through which the Messiah was to be born. They were never to be the center, the center was always Jesus! The land and all the other promises/blessings were tools to accomplish this mission. They were never intended to be an end in themselves.

If this is true why did God promise them the land and other things "forever" or say they would be "everlasting?" Christians who ask this haven't really stopped to think about the question. All Christians believe that the world will end or, at least, be dramatically changed at the Second Coming of Christ; therefore, nothing physical can be forever or everlasting. God is Spirit. The physical is temporary, the spiritual is forever. The "forever" part of these promises is their spiritual application. [Again, we study this in detail in The Love Covenants.] Even Abraham recognized this.

"By faith he made his home in the promised land like a stranger in a foreign country; he lived in tents, as did Isaac and Jacob, who were heirs with him of the same promise. For he was looking forward to the city with foundations, whose architect and builder is God." Heb. 11:9-10, NIV

Yes, Israel was promised the physical land [conditionally]. They fully possessed it 2 - 3 times before Christ came. If, after the death of Christ, they had repented as a nation, they would have been able to continue to enjoy the land and other benefits until the Second Coming.

Is there then two different people of God as some "End Times" teachers imply? No. That is an insult to the cross of Christ. If there is any way in any era to God other than Jesus Christ, then Jesus did not have to die. The Church has not replaced Israel, rather it was the plan all the time. The purpose of Israel was to be a glorious introduction to the Church, with Israel being given privilege of being first into the Church. Many Jews did accept this honour and joined the church, unfortunately, as a nation they continued to reject Christ and were destroyed in AD 70.

So where does this place the Jews of today? They are as much in need of a Saviour as everybody else. The Biblical purpose of Israel as a physical nation ended when the Church was born as the true spiritual nation. Any attempt to manipulate Scripture to apply to the Israel of today is nonsense at best and dangerous heresy at worst. We don't hold the Egyptians [or anyone else] of today responsible for their Biblical ancestor's actions, why should we think the Jews are any different? Israel today is a nation among nations. The Jews are a people among people. God is not a racist. All, regardless of nationality, are welcome to enter the Church through Jesus Christ, and all, regardless of nationality, who remain outside of Christ will be judged.

You can study the true purpose of Israel in the Love Covenants.