This unknown woman with the issue of blood appears in three of the four gospels.  She had a serious, chronic problem.  We do not know a lot about her, except that she had had this illness for 12 years, had spend all her money on doctors and was still growing worse rather than better.

This courageous woman was not a person to take set-backs.  She was constantly searching for solutions to her problem.  She had heard about Jesus.  Jesus had a reputation of helping and healing people.  Should she approach Him directly and asked to be healed and, if not, how could she be healed?

There were several problems with approaching Jesus directly:

1.  Her condition made her unclean.  Like a leper or anyone with a contagious disease she was suppose to warn people of her condition so they could protect themselves.  She was not supposed to be in the crowd to begin with.

2.  She would view Jesus as a “Holy Man” or “Teacher.’  Such a person would be appalled with her condition and refused to touch her or deal with her.  We know that is not how Jesus would have reacted, but from what she knew of the customs and actions of such men in her day she would feel it was a likely reaction.

3.  And, of course, it was an embarrassing condition to talk about.  Women simply did not talk about such things, especially in public and with a man.

Daughter Of God:
Woman With The Issue Of Blood 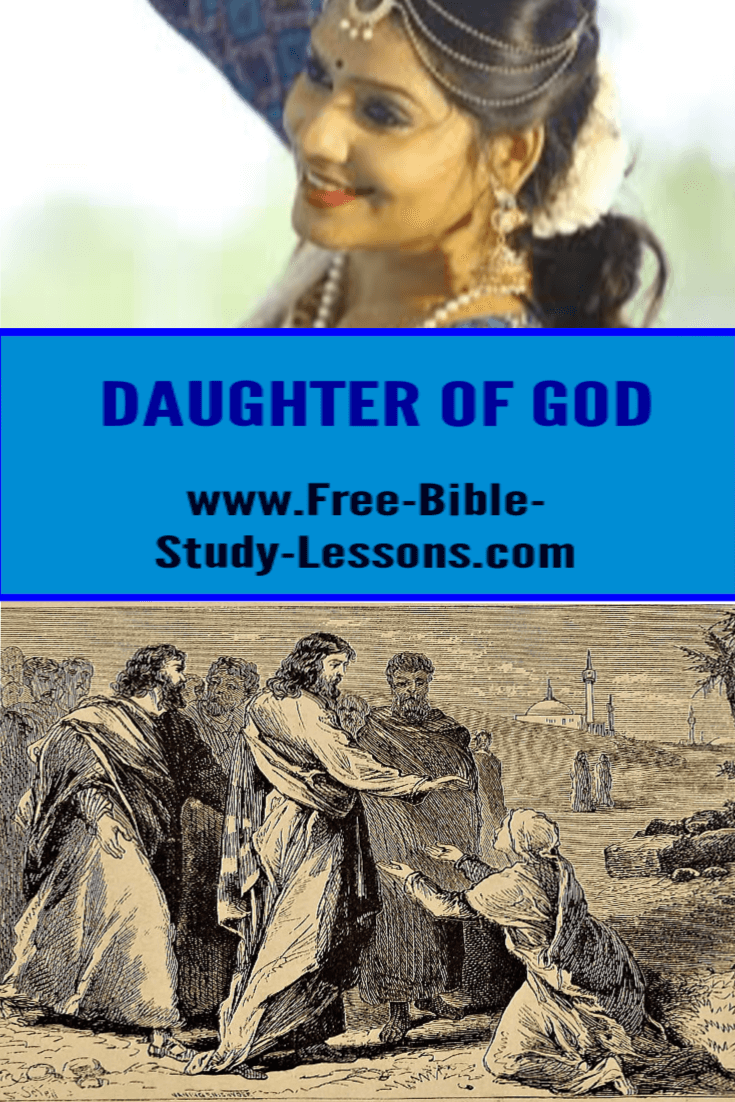 This determined woman with the issue of blood was not going to give up.  She believed that all she had to do was touch the hem of Jesus’ clothes and she would be healed.  That would mean sneaking up on Him in a crowd, touching His clothes and then slipping away unknown but healed.

What she had not counted on was that Jesus would feel the healing power going out from Him.  Jesus, in His human nature, did not know she was in the crowd and did not know who had touched Him, but He knew someone - among all who had jostled Him and bumped into Him - had touched Him in faith.  And He stopped to find out their story.

The woman saw that her hope of disappearing quietly into the crowd was gone.  No doubt she was fearful that Jesus would condemn her actions, humiliate her, and, perhaps, reverse the healing.  Still she came forward and confessed to Jesus what she had done and why.

The first word out of Jesus’ mouth stilled all her fears.  He called her “daughter.”  No condemnation.  No criticism.  Only warmth and welcome.  She was a daughter of God!

From the history of this daughter of God with the issue of blood we learn determination and persistence.  She was not sitting at home moaning about her condition.  She was not swimming in tears of self-pity.  No, she was actively seeking solutions.  Undoubtedly disheartened by the failure [and expense] of every doctor she had tried, she never gave up. She was persistent.  She kept trying.  Every time she failed, she tried again.  The doctor’s “solutions” had probably been painful as well as expensive, but she kept at it.  She had a dream - restored health - and nothing was going to stop her.

Sometimes we need a touch from Jesus.  Maybe it is a healing, maybe it is salvation for a family member or friend, maybe it is an emotional or spiritual need, or…  It doesn’t matter.  We will not receive the answer sitting around hoping Jesus will act on our behalf.  We need the determination to seek Jesus for the answer seriously and persistently.  Too many people turn back in the middle of the crowd, if they even get there to start with, because it is too hard to press all the way through.  They leave Jesus untouched and their miracle unfulfilled simply because they did not want it enough.

This unnamed daughter of God with the issue of blood was creative.  As we said above, approaching Jesus directly would have been difficult - not that she would not have done it if there were no other way.  She put her mind to work.  All she really needed was just to touch His clothes.  The best way to do that was to work her way through a crowd that would be constantly touching Him and bumping into Him and touch Him herself.  What could be easier or more anonymous?

Do we get trapped into “locked box” thinking.  Do we say, “It’s never been done that way before.”  We need to think outside the box.  We need to be creative.  If you study the miracles of Jesus, you will see that rarely did He heal the same way twice.  God has principles, but not formulas.  We have to be open to try new things, look at situations in a new light.

Another thing we need to notice is how important this woman was to Jesus.  Remember the context.  Jesus is on His way to heal a girl of an important Jewish leader who was on the point of death.  This is an emergency.  Any delay could make Him too late.  Yet, in spite of all the pressure, Jesus stops and takes time to personally minister to this daughter of God.

Like the Egyptian slave girl Hagar - who was honoured as the first person to see the Angel Of Lord - this unnamed woman was important and significant to Jesus.  No matter where we come from, no matter what our circumstances, no matter what our experiences [or lack of experience] with “religion” is, Jesus loves us and cares for us.  He will stop what He is doing to spend time with us.  His “line” never gives a busy signal.  Rest assured, you are safe with Jesus.

Since this daughter of God with the issue of blood was important to Jesus, He was not going to let her simply slip away and go back to a normal life.  She had acted courageously in seeking the solution to her problem, now she would have to show her courage by standing up in the crowd and telling what she had done and what had happened to her.  Jesus did not do this because He needed an ego boast.  It was for the benefit of woman and the crowd.  The woman needed to confirm her healing by confession.  If she had gone home secretly she may have suffered guilt wondering if she had done something wrong.  And her faith would always have been “in the closet.”  The crowd needed to hear a testimony of faith to strengthen their faith in Who Jesus was/is.

Although Jesus encouraged a weak faith - like meeting with Nicodemus in secret - He never seems to be one for the “every head bowed, every eye closed” approach.  Faith must be expressed.  Faith must be acted on to become a reality.  It has to move from an intellectual or emotional experience to a heart change or it is not real.

After this woman with the issue of blood had confessed what she had done, notice the first word out of Jesus’ mouth:  Daughter.  To Jesus she wasn’t some strange woman in a crowd.  She wasn’t just a nameless face. She wasn’t a bothersome interruption.  She wasn’t just another person who needed Him.  She touched Him in faith.  She was now family.  She was a daughter of God.  He was her father.  He was going to care for her and look after her.  A new, close relationship had blossomed.

Whether you are a Christian or not, you can come Jesus.  You may have been a stranger, you may feel like a stranger, but the moment you touch Jesus in faith - you are family.  You have entered a new relationship.  Jesus is your Father.  He will never reject you.  He will never laugh at your fears and concerns.  He cares for you.  You can come to Him confidently and in total safety.  Imagine Jesus calling you a son or daughter of God.

Hear the words of Jesus to you:  “Daughter [or son], your faith has healed you. Go in peace and be freed from your suffering.” Mark 5:34