Do not let anyone who delights in false humility and the worship of angels disqualify you. Such a person also goes into great detail about what they have seen; they are puffed up with idle notions by their unspiritual mind. Col. 2:18, NIV

Being a “Disqualified Christian” has nothing to do with salvation.  We are saved and kept by grace.  There is nothing we can do to earn it or to earn God’s love.  God chooses to love and save because of Who He is not because of who we are or what we do.  We need to be crystal clear on that.

However, salvation is the gate into the Kingdom of God not the end goal.  Salvation brings us back to where Adam and Eve were in the Garden before the Fall.  It is the starting point of true life and real relationship with Jesus.

Now Jesus has a plan for each life for which we will be rewarded in eternity.  Paul gives many instructions about pressing toward the mark, running the race, living a life that is pleasing to God etc.  In a normal race or competition only one person or team gets to win.  In the race that Jesus has marked out for us, every person has the potential to be a winner!  However, Satan wants to destroy lives and humiliate God by leading His children off course.  Satan wants us to become disqualified Christians and miss God’s best for us.  Paul was very conscious of how easy it was - even for him - to become distracted and miss the mark or become shipwrecked.

So what are some of the traps that can lead us to be disqualified Christians who fail on the race of life and miss God’s best? 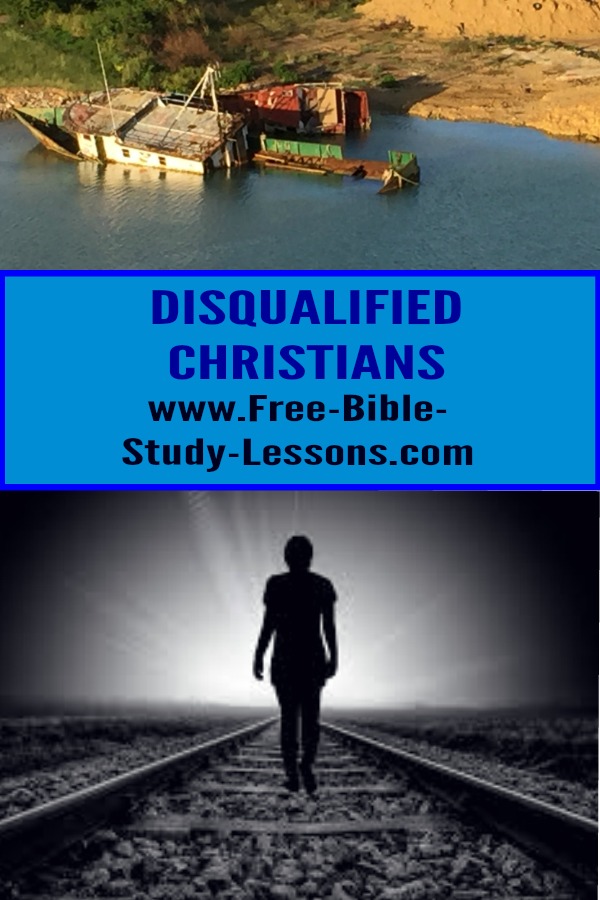 What does Paul mean by false humility?  A little further down in this chapter he tells us that false humility is a result of legalism.  It makes the rules that supposedly make us righteous and takes great pride in keeping them [and in forcing them on others].

Does this mean that God has no standard for the righteous living of His people?  Of course not.  But we recognize that our only righteousness is in Jesus Christ.  The false humility of legalism knocks Christians out of the race because it focuses on rules and regulations rather than on Christ.  It tries to make people do right by a system of rewards and punishments [usually heavy on the punishments!].  It operates on condemnation.  When we come to Christ we are given a new nature.  We want to live a life pleasing to God because of who we are, not because we are forced to.  A bird does not fly because it has to but because it wants to…that’s its nature.  We learn and obey the laws of God not because we have to, but because it is our new nature and we want to.  When we fail we are acting contrary to our nature, but we are not condemned rather we are convicted.  We receive forgiveness and move on.

The devil has disqualified many Christians from the race God has for them because they see God as a harsh and demanding Father Who judges and condemns them for every violation of His Law.  It is impossible to run an successful race under such conditions.  God is a loving Father, encouraging and enabling His dearly treasured children [yes, you] to run and win the race He has set out for you.

Angels are real and powerful beings that move in the spiritual and physical worlds.  Another of satan’s tricks to make disqualified Christians is to get our eyes to focus on someone less than God.  Because angels are powerful and mysterious to us it is easy to be fascinated with them.  Some people claim to talk to angels and have relationships with them on a regular basis.

This can lead to pride - a feeling that one is spiritually superior to those who have not experienced angelic visitations.  Actually Paul says it is the unspiritual that are mesmerized by angels.  As created beings they certainly do not deserve worship - even the “hero” type worship that is often paid to the rich and famous.  We are not to pray to angels, as some do.  We are not building relationships with angels.  Yes, in the Bible some had conversations with angels but it was for clarification of the message of God not developing relationships with specific angels.

And remember, Jesus Christ and His Word, as make alive by the Holy Spirit, are the only reliable sources of information we have about the spiritual world.  We are easily deceived and fascinated by what we don’t understand fully.  Satan and his demons can appear as angels of light.  Joseph Smith received the Book of Mormon from an angel claiming to be Gabriel and Muhammad wrote the Quran after being visited by an angel.

Our spirituality is based solely on our relationship with Jesus Christ and is evidenced in a growing lifestyle that is pleasing to God.  Angelic visitations and other spiritual experiences may very well be genuine but they are not a measure of spiritual maturity nor are they where we are to be focused.

Human beings are created beings.  Now we a fallen beings.  Our minds are under delusions and deceptions because of our sin nature.  But we are very creative and manipulative.  Intellectual minds can come up with all sorts of logically sounding arguments against the existence of God, the reliability of the Bible and all the Christian doctrines.  If we allow ourselves to be poisoned by these thoughts [for what we think upon we will become] we can begin to doubt or compromise the Truth and become disqualified Christians.

How many Christian ministries and churches, for example, have compromised the plain teaching of Scriptures on creation for evolution or some hybrid approach?  Does it honour the Word of God and strengthen of the faith of believers to interpret the infallible and unchangeable Word of God with fallible and changeable science?  Should it not be the other way around?  Are they afraid their secular peers may laugh at them for holding to a Biblical young earth creation point of view?  Do they really think they gain credibility for Christianity by denying what their peers can clearly read in Scripture for themselves?

On this, and every issue, we must study the Word of God to see what reality is [of course, we must be sure we are correctly understanding it] and not be led astray by fine sounding arguments.  One of the basic things to do with any argument is to look for what presuppositions it is based upon.  [We study this is Rev. LeRoy Davis’ course on Presuppositions And World Views].  A presupposition is basically an unproven statement of faith on which we build our world view.  And EVERY argument is build on presuppositions.  For example, every argument will have at the core the presupposition that God exists or that He does not exist - both of which are unprovable statements of faith.

Do not allow yourself to be disqualified because someone seems to have a convincing argument against Christianity or some part of it.  Remember, just because you don’t have an answer, doesn’t mean there isn’t an answer.  Only God has every answer.

It is easy to see where false doctrine [Christian teaching] can cause disqualified Christians, but true doctrine can also cause us to be distracted and lose focus.  Someone has said that any truth taken to extreme becomes error.  The Bible is full of balance and when we only take one aspect of truth we become unbalanced…and we all know what happens to an unbalanced runner!

For example, the Bible teaches both the sovereignty of God and human responsibility.  To ignore either one is to go into error.  The Bible teaches that we are righteous solely because of the work of Christ; however, it also teaches that we are to live righteous lives that are pleasing to God.  Some Christians are unbalanced thinking that since their righteousness is not based on their actions what they do doesn’t matter.  Such thinking is sure to lead to trouble.  Yet other Christians think they have to keep all the rules to be pleasing to God which also leads to problems.

Not only is it dangerous to look at only one half of a Scriptural teaching, but also it is dangerous to become focused on only one teaching.  Yes, we all have certain subjects that we find especially interesting, but we need to study the whole teaching of Scripture.

Once such subject that has distracted and disqualified many Christian, at least in the West, is the doctrine of the Second Coming of Christ.  Yes, Jesus will one day return visibly, physically to this earth to receive His own.  This has been the glorious hope of the Church for 2,000 years or so.  Nevertheless, some people have become so focused on their version [often a sensationalized version] of this event that they have time for little else.  There are entire ministries built on a particular “end times” view with almost fanatical followers.  There are “clocks” that claim to predict how close we are to the return of Christ by interrupting Scripture through current events.  While this sensationalized view of the Second Coming tends to give itself to this type of extremism any view and any doctrine can become a disqualifying factor if it becomes the major - or only - doctrine a Christian focuses on.  We must be balanced to be mature.

I hope this article and the one on Christophobic Christians have alerted you [or refreshed your memory] on some of the dangers we face as Christians.  That is not to bring fear or condemnation into your life, but to give you some “watch outs.”  I want you to run a good race!  What if you have already stumbled or been distracted?  Good News.  The race isn’t over until you meet Jesus face to face.  So get back up, get on the track, you can still win.  Just give it your all!