The False Assumptions
Of Dispensationalism

Dispensationalism is a complicated system of belief about the "last days," the Jewish nation, the millennium, and other related subjects. This system is extremely popular and heavily promoted in North America. I will show below that this system is built on false assumptions about the Scripture. If ANY of their assumptions are wrong then their entire system collapses like a house of cards. Note: In this short report there is not enough space to go into great detail. You are encouraged to check these claims out for yourself. Also we look at dispensationalism in greater detail in our Death and Beyond Course. 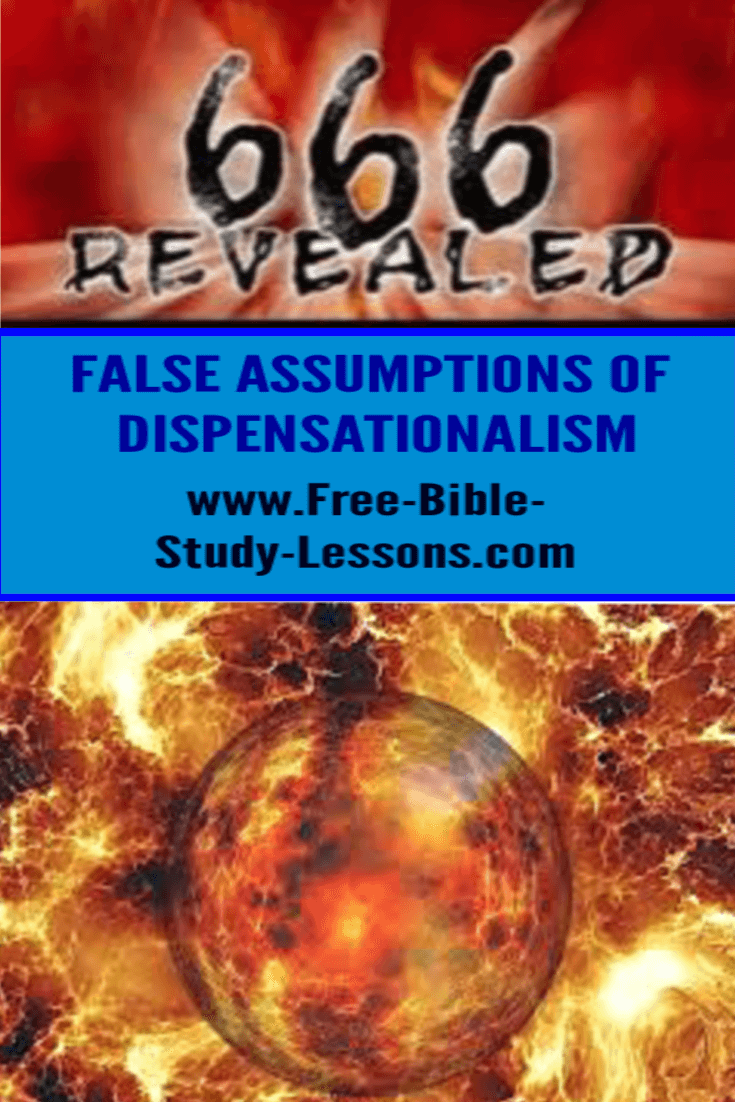 Dispensationalism assumes God deals differently with people in different time periods called dispensations [hence the name]. Although there is some disagreement among dispensationalists, most agree that there are seven distinct dispensations. The dealings of God with mankind are seen as separate - with perhaps some overlap.

Is God's plan really broken up into different ways of dealing with people at different times? This is a dangerous assumption to make because it means that God is unpredictable. He has had different unrelated plans in the past and may then have different plans in the future. It also means that salvation in some of these dispensations was possible without the cross. Some people are saved, in this view, simply because of their national heritage.

"And Jesus answered him, The first of all the commandments is, Hear, O Israel; The Lord our God is one Lord:" Mark 12:29

One God means one plan for all time and eternity.

As we study in detail in Covenants, God does not have separate methods of dealing with people in different dispensations, instead He has one unfolding plan revealed in different stages. Each stage builds on the one which has gone before and expands it.

Dispensationalism assumes there is more than one way to God. In particular, the natural Jews are seen as God's special people and are saved because of who they are, not because of Christ's work on the cross. Some go so far as to imply that if the Jews had accepted Jesus the cross would not have been necessary at all.

"And almost all things are by the law purged with blood; and without shedding of blood is no remission." Heb. 9:22

Without Christ's shed blood no one could be saved: Jew or Gentile.

"And all that dwell upon the earth shall worship him, whose names are not written in the book of life of the Lamb slain from the foundation of the world." Rev. 13:8

The atoning death of Christ was God's plan from the beginning of the world.

Dispensationalism assumes that God has not yet fulfilled His promise of Land to Abraham.

"And the LORD appeared unto Abram, and said, Unto thy seed will I give this land: and there builded he an altar unto the LORD, who appeared unto him." Gen. 12:7

"And the LORD said unto me, Arise, take thy journey before the people, that they may go in and possess the land, which I sware unto their fathers to give unto them." Deut.10:11

God told Moses that He was about to give the land to the children of Israel as He had promised.

"And the LORD gave unto Israel all the land which he sware to give unto their fathers; and they possessed it, and dwelt therein." Joshua 21:43

Scripture records that God fulfilled His promise to Abraham under Joshua.

"Blessed be the LORD, that hath given rest unto his people Israel, according to all that he promised: there hath not failed one word of all his good promise, which he promised by the hand of Moses his servant." 1 Kings 8:56

Israel possessed the land a SECOND time under David and Solomon. 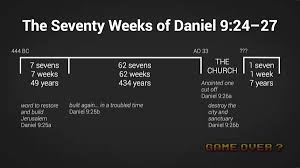 Dispensationalism assumes there is a gap in the image in Dan. 2. For some mysterious reason the feet are disconnected from the legs. Daniel did not see this. He saw a complete image - no gap between the legs and the feet! Do you see one in the Scripture? Why would the Dispensationalist place a gap here? The only reason is to make Scripture fit into a prophetic agenda.

"This image's head was of fine gold, his breast and his arms of silver, his belly and his thighs of brass, His legs of iron, his feet part of iron and part of clay. Thou sawest till that a stone was cut out without hands, which smote the image upon his feet that were of iron and clay, and brake them to pieces. Then was the iron, the clay, the brass, the silver, and the gold, broken to pieces together, and became like the chaff of the summer threshing floors; and the wind carried them away, that no place was found for them: and the stone that smote the image became a great mountain, and filled the whole earth." Dan. 2:32-35

This beautiful picture of the kingdom of God [stone] being set up in the days of the Roman empire [at the death and resurrection of Christ] and growing until it fills the earth is twisted and distorted for sensationalistic thrills.

Dispensationalism assumes there is a gap in the Seventy Weeks. Look at this verse. Look at the context. Is there a gap? Did not God say 70 weeks ARE determined? Did He say 69 plus gap will make 70? Of course not! My God knows how to count. 70 follows 69.

"Seventy weeks are determined upon thy people and upon thy holy city, to finish the transgression, and to make an end of sins, and to make reconciliation for iniquity, and to bring in everlasting righteousness, and to seal up the vision and prophecy, and to anoint the most Holy." Dan. 9:24

Dispensationalism assumes the prince of Dan. 9:26-27 is a future antichrist.

"And after threescore and two weeks shall Messiah be cut off, but not for himself: and the people of the prince that shall come shall destroy the city and the sanctuary; and the end thereof shall be with a flood, and unto the end of the war desolations are determined. And he shall confirm the covenant with many for one week: and in the midst of the week he shall cause the sacrifice and the oblation to cease, and for the overspreading of abominations he shall make it desolate, even until the consummation, and that determined shall be poured upon the desolate." Dan. 9:26-27

Look at the above verses. Jesus confirmed the covenant - He said He came to minister to the lost house of Israel. His death on the cross ended the need of all the other sacrifices, etc. Dispensationalism takes the beautiful, holy work of Christ on the cross and credits it to some future antichrist! Why? So they can keep their system of prophecy intact. By the way, twisting this Scripture is the only way they can get a seven year tribulation which is so important to their beliefs.

"Verily I say unto you, This generation shall not pass, till all these things be fulfilled." Matt. 24:34

Dispensationalism assumes that words in Revelation like "quickly" and "soon" do not mean something is going to happen in the immediate future. Like assumption eight, the dispensationalist believes he knows what the author meant instead of looking at what he said. They claimed that the references in Revelation to things happening quickly really mean that when the events begin to happen they will happen quickly. If that is what the writer had meant to say, he could easily have said it that way. He didn't.

Dispensationalism assumes that natural Jews and national Israel are the center of God's plan. Christ is replaced by the Jews. Examine some of their charts and you will see it is all about Jews. Jesus is a sidelight. Does God love the Jews? Of course, but Paul makes it very clear in Romans and elsewhere that the natural Jews no longer have any special place in the plan of God. What was the purpose of the Jewish nation in the Old Testament anyway? It was to be the womb through which Messiah would be born in order to bless the nations! A world-wide church was always the goal. The Jewish nation was a valuable and necessary instrument in accomplishing that goal. And if they had remained faithful to God as a nation there would have been great reward instead of AD 70. God is not a racist, all nations are now and forever welcomed into His presence through Jesus Christ.

This report is not intended to question the sincerity of anyone's faith. Most dispensationalists love God. They are Christian brothers and sisters. However, their system of belief about these things is, I believe, a dangerous error. If you look at the implications, dispensationalism devalues Christ and the cross among other things. As you examine these things, search the Scripture with an open mind to see if these things are so or not. We are required to reject every teaching - no matter how interesting or popular - if it is not grounded firmly in Scripture in context.

Dispensationalism, in my opinion, distracts Christians and motivates them to waste time, energy and money in a false direction rather than in expanding the Kingdom of God.