The Mystery of Gog and Magog

There are many strange ideas about Gog and Magog in certain Christian circles today. It is so easy to get caught up in sensationalism. Our carnal nature likes to be ticked [which is why tabloids outsell regular newspapers]. If we would come to a true and and Scriptural understanding of this subject, we need to clear away pre-conceived ideas and examine what Scripture has to say. Sometimes we get caught into error because well-known Bible pastors, teachers or evangelists present their point-of-view with authority. We respect them, and that is good, but they are human and subject to error. We need to be diligent enough to take any teaching presented to us to the Scripture in context and test it for ourselves.

"The Jews received Paul's message with enthusiasm and met with him daily, examining the Scriptures to see if they supported what he said." [Acts 17:11, Message]

With that in mind, let us begin.

At the beginning Gog and Magog were an individual people.

From this point they disappear from Biblical history until they turn up in the prophetic books of Ezekiel and Revelation. The ancient Jewish historian Josephus identifies them as the Scythians: "Magog founded those that from him were named Magogites, but who are by the Greeks called Scythians." [Josephus 1:6:1] He is also identified with the Scythians by Alfred Edershiem in his Bible History Old Testament, page 59.

During the reign of Josiah the Scythians were a major menace.

"...the Scythians, who storming out of Scythia, crossed all of Asia until he came to Egypt...The Scythians then held Asia for the next twenty-eight years...In twenty-eight years they overran, possessed and lost Media, Assyria and all Asia...When the Scythians had subjected all of upper Asia, they went straight into Egypt. When they came as far as Syria Palestina, Psammetichus, king of Egypt, met them in person. He persuaded them by gifts and presents not to go any further." [Ussher's Annals of the World, pg. 91]

"Assyria's two main cities, Assur and Nineveh, had fallen in 614 and 612 BC, respectively, to attacks by the Medes and Babylonians - The barbaric Scythians from northern Mesopotamia also had some part. These people had been making their presence felt in recent years. They had passed through Philistia about 627 BC, in Josiah's early years, creating fear in Judah...and had now switched sides to aid Media and Babylonia against Assyria." [A Survey Of Israel's History, Leon Wood, Pg. 369] 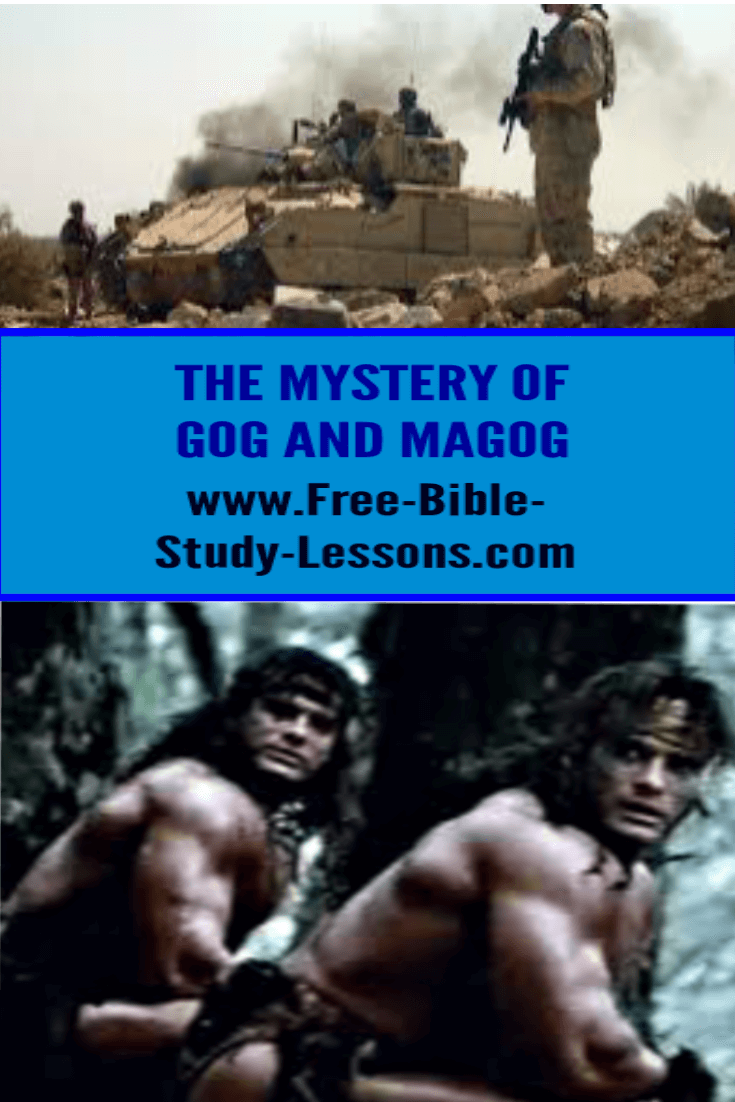 These events would be fresh in Ezekiel's mind as they only happened 10 - 30 years before he was taken into the Babylonian Captivity.

Both Ezekiel and John use these two names, Gog and Magog, to represent the enemies of God. The fact that these two Divinely inspired authors do not use the term in exactly the same way reveals they use it as a symbolic term to describe different events.

"Son of man, set thy face against Gog, the land of Magog, the chief prince of Meshech and Tubal, and prophesy against him..." [Ez. 37:2, KJV]

"And shall go out to deceive the nations which are in the four quarters of the earth, Gog and Magog, to gather them together to battle: the number of whom is as the sand of the sea." [Rev. 20:8, KJV]

Ezekiel refers to Magog as a specific land with Gog as the ruler. John refers to both of them as representing deceived nations. So before we can understand what Ezekiel and John were talking about we need to know what these terms meant to their original readers.

"...in Jewish writings "Gog and Magog" was a frequent, standard expression for the rebellious nations of Psalm 2, which gather together "against the Lord and against His Anointed." [Days Of Vengeance, David Chilton, 523]

So what was Ezekiel looking at? The same period of time that some of Daniel's prophecies in chapters 8 and 11 of his book refer to: The 400 Silent Years.

Ezekiel 38:1-20 talks about the might of these villians coming against Israel, a land in peace, to destroy it.  During the 400 Silent Years, Antiochus Epiphanes, the ruler of Syria, came against Israel with a vengeance.  He conquered Israel, forced the Jews to worship other gods [torturing and murdering any who refused], caused the temple sacrifices to stop, polluted the temple by offering a pig on the altar, burned all known copies of the Scriptures, and built heathen temples and idols in Israel.  Any Jew who dared to follow the laws of God was risking his life.

The rest of chapter 38 and all of chapter 39 detail Antiochus Epiphanes' defeat.  God raised up the family of the Maccabees.   Although greatly out-numbered, they were able to defeat Antiochus and the disloyal Jews in a series of battles, cleanse the temple, and restore the borders of Israel to almost the same area ruled by Solomon.

For a more detailed understanding, study the history of the 400 Silent Years.  Adam Clarks's Commentary on the Bible and Josephus would be helpful.

"And shall go out to deceive the nations which are in the four quarters of the earth, Gog and Magog, to gather them together to battle: the number of whom is as the sand of the sea." Rev. 20:8

As can clearly be seen, Revelation uses the same symbols to refer to a different event.  Revelation refers to an event just before the Second Coming of Jesus Christ.  Here our two villians are described as nations which rise up against the church and are themselves destroyed in the Final Judgment.   Much to the sensationalist's disappointment, it has nothing to do with the nations of Russia and Israel specifically.  Even as Nero viciously attempted to crush the church in it's infancy, so ungodly nations - represented as Gog and Magog - will attempt to stamp it out in its maturity.  The church will be victorious and Christ will return bringing judgment on all who dared to touch His bride.

I know this is a new concept to some [or most] of my readers.  Put aside the addictive hype of sensationalism.  Prayerfully consider and research what I have put before you.  May the Holy Spirit lead you into all Truth.

For your further consideration:

"According to some popular writers, this expression [Gog and Magog] refers to Russia, and foretells a war between the Soviets and Israel during the 'Tribulation.' Of the many problems with this hypothesis, I will mention just two. First, Revelation 20 says that the war of "Gog and Magog" takes place at the end of the Millennium; these prophecy writers are sneaking Gog and Magog all the way back to a point before the Millennium even begins! Second, the expression Gog and Magog does not, and never did refer to Russia..." [Paradise Restored, David Chilton, pg. 200]

For a study of the Book of Revelation, including Gog and Magog, see our course.