Hannah lived around 1063 BC [or about 2,983 years after Creation].  She was married to a man called Elkanah who also had another wife, whose name was Peninnah.  As is common in polygamous marriages, there was a lot of relationship stress.  Elkanah loved Hannah better, but she was not able to have children.  Peninnah did have several children and, out of jealousy, kept provoking and otherwise making life miserable for her until she wept and lost her appetite.

Every year Elkanah and his wives went up to the priests at Shiloh to worship God and offer His sacrifices.  Elkanah did everything he could to make Hannah feel better.  But her one consuming passion was to have a child of her own.  Year after year, as she worshipped in the tabernacle, she would pray for a son with bitter tears.

One year she was so much in distress that “she made a vow, saying, ‘Lord Almighty, if you will only look on your servant’s misery and remember me, and not forget your servant but give her a son, then I will give him to the Lord for all the days of his life, and no razor will ever be used on his head.’” 1 Sam. 1:11, NIV

The High Priest, Eli, saw her weeping and praying.  Her lips were moving but no sound was coming out.  He mistook her deep sorrow for drunkeness and criticized her.  Hannah explained the truth and Eli blessed her saying “Go in peace, and may the God of Israel grant you what you have asked of him.” 1 Sam. 1:17, NIV

The blessing of Eli was all that Hannah needed.  From that moment on she believed - in spite of all past experiences - that God had heard and answered her prayer.  She went home happy.

And God did honour His Word through Eli.  Hannah became pregnant and had a son whom she called Samuel - who was to become one of the greatest judges/prophets Israel ever had. 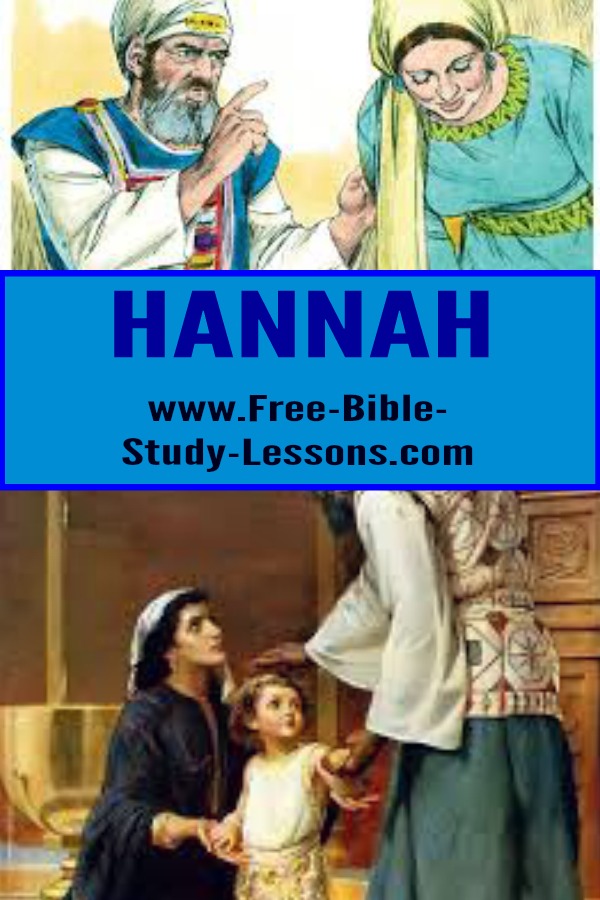 Hannah was woman of her word.  As much as she loved her only child, Samuel, she would not violate her promise to God.  When Samuel was weaned [likely between 2 and 4 years of age] she took him to Eli at the tabernacle.  She reminded Eli of what had happened previously and told him of her promise.  She left Samuel under his care to serve the Lord.

Instead of sorrowing over not have her child with her all the time, she celebrated that God had blessed her and given her a child.  It was her honour and privilege to give him back to the Lord.  [This section of Scripture is often quoted in Protestant Baby Dedication services.]

She then gave a beautiful prayer quoted below.  This prayer was inspired by the Holy Spirit and prophetically looks at people and events far beyond Hannah and Samuel.  Mary, the mother of Jesus, referenced it in her song [Luke 1:46-55].  Also, the Holy Spirit granted Hannah the insight in her prayer to be the first person in history to refer to the Messiah as “anointed” or the Anointed One.  It was another step forward in the revelation of the grand plan of God.

After that, she only saw Samuel once a year when they went for the annual sacrifice.  Every year she would make him a special robe and bring it to him.  Every year Eli would bless Elkanah and Hannah asking God to give them more children.  God was gracious and rewarded Hannah with three sons and two daughters.

Then Hannah prayed and said:

“My heart rejoices in the Lord;

in the Lord my horn[a] is lifted high.

My mouth boasts over my enemies,

for I delight in your deliverance.

there is no one besides you;

“Do not keep talking so proudly

or let your mouth speak such arrogance,

for the Lord is a God who knows,

and by him deeds are weighed.

“The bows of the warriors are broken,

but those who stumbled are armed with strength.

Those who were full hire themselves out for food,

but those who were hungry are hungry no more.

She who was barren has borne seven children,

but she who has had many sons pines away.

he brings down to the grave and raises up.

The Lord sends poverty and wealth;

he humbles and he exalts.

He raises the poor from the dust

and lifts the needy from the ash heap;

he seats them with princes

and has them inherit a throne of honor.

“For the foundations of the earth are the Lord’s;

on them he has set the world.

He will guard the feet of his faithful servants,

but the wicked will be silenced in the place of darkness.

“It is not by strength that one prevails;

those who oppose the Lord will be broken.

The Most High will thunder from heaven;

the Lord will judge the ends of the earth.

“He will give strength to his king